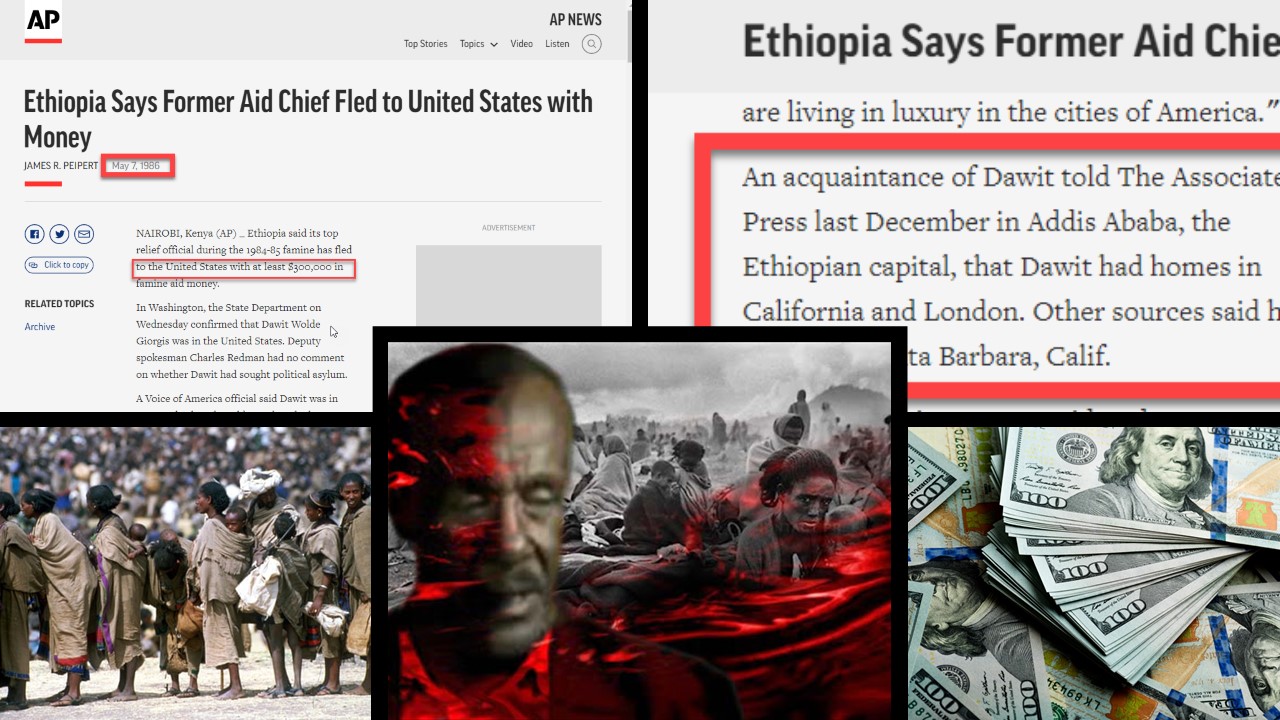 NAIROBI, Kenya (AP) _ Ethiopia said its top relief official during the 1984-85 famine has fled to the United States with at least $300,000 in famine aid money.

In Washington, the State Department on Wednesday confirmed that Dawit Wolde Giorgis was in the United States. Deputy spokesman Charles Redman had no comment on whether Dawit had sought political asylum.

A Voice of America official said Dawit was in New York where he told VOA by telephone there was no foundation to Ethiopian government charges that he had ″betrayed his country and exchanged his dignity for personal gain.″

The VOA official, Brian McClure, said the conversation with Dawit did not go beyond the denial and that Dawit declined an on-the-record interview.

The accusations against Dawit, who headed the Relief and Rehabilitation Commission, was made in a lengthy statement in the Amharic language late Tuesday by Ethiopia’s state-run radio. An English version of the statement was broadcast Wednesday and monitored in neighboring Kenya.

Asked about the allegations against Dawit, Redman said extensive U.S. government monitoring shows ″no indication any U.S. assistance has been diverted.″

The radio announcement was the first official acknowledgement that Dawit had defected. He was last heard of on Oct. 25, when he left Ethiopia for Europe and the United States to solicit famine relief funds.

Western diplomats and Ethiopian and foreign relief officials in Ethiopia generally assumed late last year that he had left for good and was in the United States. Last December, however, the State Department said no asylum request had been received.

The broadcast indicated Dawit was in the United States, referring to ″those like him who are living in luxury in the cities of America.″

An acquaintance of Dawit told The Associated Press last December in Addis Ababa, the Ethiopian capital, that Dawit had homes in California and London. Other sources said he settled in Santa Barbara, Calif.

Dawit’s defection was considered a severe embarrassment to the Ethiopian government. He had been an army major, a senior government figure and a close friend of the country’s military leader, Mengistu Haile Mariam.

The Ethiopian government statement said Dawit, a bachelor in his mid-40s, had ″engaged in personal profiteering at a time when every minute had to be used in the campaign to save lives.″

It said the embezzled funds included $300,000 from a Relief and Rehabilitation Commission bank account in New York, and that Dawit had distributed thousands of dollars to relatives in California and Maryland.

For two years Dawit was head of the commission, the main government agency coordinating the international famine relief operation. He was known internationally for his impassioned pleas for aid to his drought-stricken nation, where it was estimated that famine affected 8 million of its 42 million people.

″The money stolen by Dawit was stolen from the mouths of hungry infants, mothers and elderly citizens of Ethiopia,″ the government statement said.

″He misappropriated funds allotted to the work of saving the lives of our compatriot children and youth who were on the brink of death, thereby committing an act which will never be forgiven by history, and has fled from the country after betraying it.″

The government has never officially estimated the death toll in the famine. But relief officials have said privately they believe about a million Ethiopians died.

The statement called Dawit ″an urgently wanted criminal″ and an ″enemy of the people.″ It said that ″those who stand for justice and truth will cooperate with us in bringing him to punishment.″

When Dawit left Ethiopia last October, the itinerary for his fund-raising mission was not announced. But sources in Addis Ababa, including diplomats and relief officials, said he went to Britain, Belgium and the United States. They said his last contact with the Ethiopian government was from Brussels, the Belgian capital.

The sources said one of Dawit’s brothers defected to the United States last September.

The government statement said Dawit had arranged for commission bank accounts to be set up in foreign cities, including New York and London, for deposit of aid donations.

″The money deposited in the commission’s foreign bank accounts was then pocketed by the traitor,″ it said.