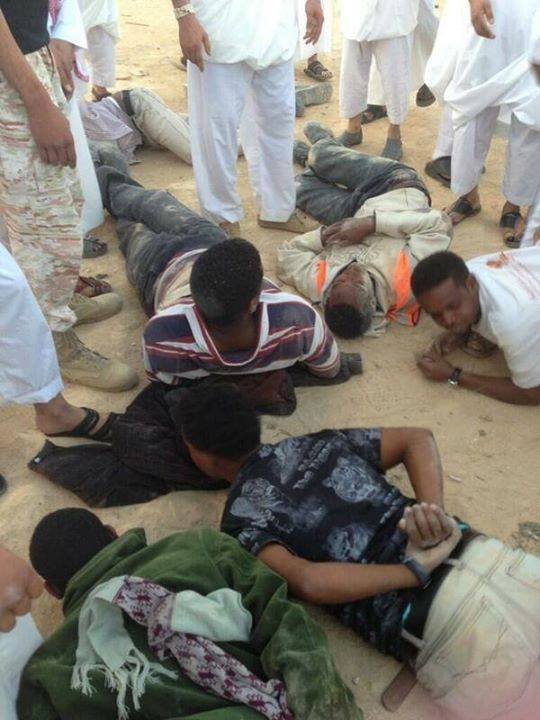 Today it is said that there are over a quarter of a million Ethiopians in the Kingdom of Saudi Arabia. The vast majority are young economic refugees working as maids, chauffeurs, and house servants. Women outnumber men and judging by the conditions in Ethiopian it is safe to say most have less than eight grade education. Most arrive with an employment contract for a  specified period of time while a few are undocumented refugees working menial jobs.

Saudi Arabia with a population of about 27 million relies on foreign national to run its economy. They comprise 80% of the labor force. In the last few months what has gotten the attention of the Kingdom are the hundreds of thousands of undocumented people that live in limbo. In order to solve this festering problem the Kingdom announced a seven month amnesty period asking individuals to qualify for legal status or leave the country.

Indians, Filipinos, Tamils and other nationals were seen camping around their Conciliates waiting for transportation to their homeland. Upon the expiration of the amnesty period the Saudi Government has been rounding up ‘illegal’ immigrants and holding them in ‘special centers’ while processing their papers.

In the process there have been clashes between the police and the immigrants resulting in the death of an Ethiopian and severe beatings of a few others. Today thousands of Ethiopians, Somalis and Eritreans are held in detention centers waiting to be deported back to their respective homelands.

The callous way the Saudis treat those they identify as illegal is simply beyond the pale. Killing, beating and raping for such a simple offense is a reflection of a backward society riddled with its own human right problems.

We Ethiopians are saddened, shocked and at a loss on how to respond to such abuse of our people by a neighbor. The last few weeks the criminal act of the Saudi regime has been the center of conversation among those of us that have left our country but are lucky enough to live in places that has allowed us to live with dignity far from our motherland. The wanton violence against our people has angered us while making us once again feel helpless when being victimized.

We are showing our displeasure at the unprovoked violence against our people by marching in front of the Kingdom’s Embassy to shame the regime; we are collecting countless petitions to make our concerns clear to Saudi officials. All what we doing are commendable and the best way we know how to let the steam out. But there are a few things to keep in mind to really appreciate the situation that is confronting us.

One thing we have to understand is the nature of the Saudi government that is committing all this human rights abuse in broad day light. The question to ask would be should we expect anything different? How in the world does one expect justice from a country that keeps half its own citizens under servitude? Saudi Arabia a country named after an individual is a male dominated society where the woman is considered a piece of property. The immigrant is just another piece of inanimate object and no amount of thought or care goes to worry about such lowly creatures feeling or wellbeing.

I believe our righteous anger should also be aimed at the cause of such calamity not just at the symptom. A simple question should be why are those hundreds of thousands Ethiopians willing to go to a place that is hostile and unwelcoming is a good thing to ask. As an Ethiopian shouldn’t we be looking at the cause of the problem instead of the effect? Does shouting standing outside the Saudi Embassy a solution or would looking deeply at what caused the disease in the first place bring about a better and lasting cure?

I agree what is done to our people in the Middle East requires our unreserved condemnation and active participation in shaming the reactionary regime but I believe that should be the tip of the iceberg. The main culprit of such degradation of the people of Ethiopia is the dictatorial Tigrai ethnic based minority regime lording over us. Tackling that problem is the key to solving the current insult we are receiving.

The Saudi situation is I am afraid nothing to be so hot about at this late hour. The last twenty years in the Middle East from Lebanon to the Gulf our children have been committing suicide, forced to kill, being humiliated or driven insane. We are all aware of that. Our Woyane masters have been facilitating this crime knowing the dire circumstances they are sending these young children into. They have made exporting young girls to the Middle East or selling so called orphans to the west into a science. Again we are all aware of that.

Without being callous may I be allowed to say that what the Saudis are doing to our people is what the Woyane regime has been doing to us the last twenty years. We seem to be upset because they are foreigners but do you think it matters who pulls the trigger for the person being shot? Who do you think is doing all that atrocity to Semayawi Party and Andenet? Who do you think committed all that war crime in Ogaden, displaced people in Gambella, internally exiled the Amharas in their own land?

Wasn’t it only a year or so ago a young girl was forced to commit suicide in Beirut because the Embassy chased her out of the compound into the hands of her assailant? Aren’t we all aware of the young women that kill themselves by drinking cleaning detergents when unable to take any more of the abuse? Didn’t we see the crime committed by Gadhafi’s son wife that burned the face of our daughter or sister?

When do we learn to step up and take responsibility? When do we stop this lie and willful ignorance and always search for someone to blame? When do we learn to stop being selfish and care about those we left behind? When do we start looking deep inside our soul and admit our failings and resolve to make things right? This indignation and shouting and screaming will look foolish if tomorrow we go back and do what we have been doing all along. Turning our face not to see, investing in condominiums, belittling the efforts of those that fight for us and being used by Woyane to divide, disrupt our community even in our places of worship.

This unfortunate situation has given us the opportunity to unite and confront our common enemy. We can turn this bad situation into a positive learning experience and treat each other with dignity, worry about our people, think positive no matter what the little negative voice says in our ears and chart a new road. We can do that if we are serious and genuinely felt the plight of our people stuck in an alien place with no one to protect them. On the other hand if we are only galvanized by the picture we see but not by the slow death of our children in Ethiopia then my friend your cry is hollow, your concern is empty and you are doing more damage than good.   I have but one simple question to ask-what exactly are you going to do to get rid of the disease called Woyane in order to stop the sickness that is killing our precious land? We shall overcome.