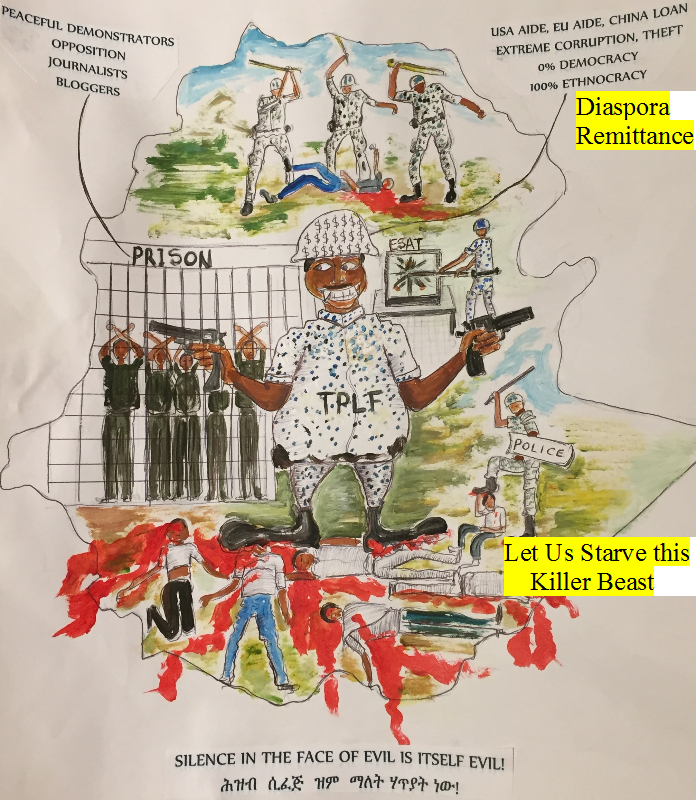 (Our hard-earned foreign currency should help our beloved families, not TPLF Killers and Torturers)

Ethiopian diaspora residing in industrialized nations have their country and their family at heart, so they sacrifice a lot to helping immediate and extended families in their homeland.  It is very common among Ethiopians, as it is for most immigrants from other poor nations, to work two or three jobs and save some of their hard-earned money to help families, relatives and friends. Despite the harsh political situation, some have also tried to go back home and start businesses with hopes of helping and contributing to the economy at large. However, most have been disappointed by the ethnocentric regime’s narrow-minded politics, corruption, and the country’s current lack of political space.

Majority of the Ethiopian diaspora see the TPLF as a divider, a killer and a torturous regime that did its best to dismantle a beloved nation, and they are sickened by recent targeted mass killings in Woldia, Chelenko, Ambo, Bishoftu, Gonder, Gojam and other regions in the country. Besides the killing and torturing of thousands, the regime is also known for spending millions of dollars on spying on Ethiopians in and out of the country. Ethiopian Embassy offices around the world are known to be staffed with a minimum of three to five undercover TPLF personnel hired to spy on Embassy staff as well as the diaspora living in foreign nations.

The fact that the regime has done a lot to suppress opposition and has even bought out supporters among the diaspora via offering money and free land is not secret.  While there are few who have sold their soul to get free land and collect blood money from the TPLF, most in the diaspora have been actively voicing concerns about tortures, killings and massacres perpetrated by the TPLF regime. Some have always done their opposition quietly because of fear of repercussion to their family and loved ones back home.

The past three years have been a turning point for people inside as well as outside the country.Despite opposition crackdown, killings and tortures by the regime, young Ethiopians have been on the streets every day demanding for their political rights, equality and an end to the TPLF’s regime. A majority of the diaspora are also standing with people back home in calling for complete removal of the TPLF regime for equality and democracy.

Via a campaign called starve the beast, the diaspora is now pledging its alliance to the struggle for freedom. The plan is not to completely stop what people are sending, but rather to send money via different channels for a couple of months and prevent the killer regime from touching your hard-earned dollars.

While the looting of the country via individual TPLF members as well as organized mafia sister organizations like Effort continues to grow the diaspora is well informed about recent TPLF activities in and outside the country. Due to political pressure within Ethiopia,most of the foreign currency obtained from aide money as well as remittance from the diaspora is being used primarily for the following purposes.

The past few years, TPLF supporters among the diaspora are openly admitting that their friends in the regime are moving millions of dollars out of the country. For the diaspora Ethiopians that are against the killer regime, nothing could be more painful than to see that the money they send home is being used to transfer looted wealth, kill their brothers and sisters and prolong the life of a blood thirsty, criminal regime

Economic experts indicate the campaign will have a significant impact on a regime that is already at the brink of death. The total remittance value sent by diaspora in 2017 is estimated to be four billion dollars, which is ~28% more than foreign currency obtained via exports.  While people do understand the importance of sending money home, they are now saying enough is enough with the killer and tortures regime and are uniting in holding up funds for few months. During the short campaign,people are seeking alternative ways to support families and friends without being used by TPLF.

People inside the country are also voicing support because they hate the fact that the regime is benefiting from these funds.Based on analysis of some economic experts, even cutting the remittance value by 30% could choke the killer regime and help in the struggle to end the misery for many Ethiopians. The same experts indicate that the campaign could serve as a model for other diasporas from repressive regimes like Ethiopia. No totalitarian government should get a free ride from its diaspora while killing and torturing its citizens.

The Ethiopian diaspora will unite against the killer regime in Ethiopia