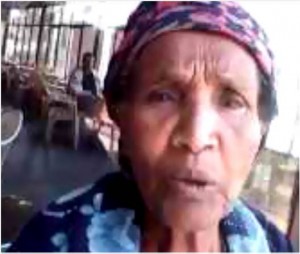 As the United Nations fails to declare the current ethnic Apartheid rule in Ethiopia a crime against humanity and as the  ICC remains reluctant to charge hordes of Tigre warlords for genocide and war crimes committed over the course of  21 years of brutal minority rule, flagrant human rights violations are spiraling out of control in lawless Ethiopia Where federal police members and feared Tigre People Liberation Front, TPLF, cadres go as far as dousing non- Tigre citizens with petrol and set them alight in broad daylight.

Even after the death of Meles Zenawi, the outdated Tigre junta remains avowedly ethnocentric and genocidal, governing the nation by exploiting ethnic and religious passions which bind and blinded Ethiopians for 21 years.

The impact of such rule is both frightening and devastating.

The heart breaking story of long suffering 67 year old Ethiopia Yilma (pictured) sent shock waves in Ethiopia when the independent Finotenetsanet newspaper published the detailed account of what happened to her and her family who lived for three decades in the historic eastern city of Harrer.

Ordeal of the elderly Amharic woman began when the city’s administrators including the commander of the police started threatening her with expulsion unless she gives up her home which was standing at prime spot in the city’s Kebele 17 zone.

However, Ethiopia Yilma withstood the unrelenting pressure and continue to live in her home with her 75 year old husband until the day more than 30 police men came to evict her forcibly.

“That morning we were drinking coffee when police men kicked open my door and dragged me outside shouting ‘here she is, here she is’. I screamed in agony asking them what my crime was but they simply said I am a lawless criminal, my neighbors also demanded to know what was happening.

“Then while we were arguing, my daughter arrived and we won the battle for the day. The police left.”

The lone, destitute and sorrow smitten grand mother told Finotenetsanet Amharic weekly reporters that the same day a police man named Ramadan and his young accomplice known as  Endale Girma went to her daughter’s tiny canteen, doused her with paraffin and set her alight in full view of the public.

“When the people brought her to the hospital my daughter was still breathing. The next day I hired a car and when we were about to leave for Addis Ababa to seek better medical treatment, police intercepted us and denied me permission to travel…my daughter died in my arms due to lack of medical attention.” Ethiopia Yilma told the paper with tears streaming down her ashen face.

Once they got rid of her daughter, local authorities evicted Ethiopia Yilma and her 75 year old husband from their private home without arranging for them another accommodation or paying compensation.

“Even the 3,000 Birr I got from my sympathetic neighbors was confiscated by Harer city police and my house is given to a well connected lady named Anisa Mohammad. She is currently building double story house on my property.” Ethiopia Yilma continues.

“My husband is Oromo and my children are Oromo. This entire calamity came up on us because I am Amharic.”

According to Yilma her daughter was the fourth person to be killed in such brutal way and the murderers are leading a normal life with no fear of prosecution.

Finotenetsanet Newspaper reporters manage to trace the area’s crime preventation unit leader Sergent Teshome Seifu but he denied knowing a police man by the name of Ramadan. Jamaal Ahmed, the region’s governor also denied any knowledge of the blood curdling crime committed against citizens based on their ethnicity and Race.

Ethiopia Yilma is currently living in Addis Ababa while her homeless husband toils in the city of Harar.

First she was enraptured by the magnificence of the official residence of the Prime Minister of Ethiopia. But now she curses the day they moved in there.

She started by Watching her father, Prime Minister Hailemariam Desalegn failing to evict former first lady Azeb Mesfin from the palace for more than a month after the death of her murderous husband Meles Zenawi, and at this moment deeply worrying about deputy Prime Minister Debretsion Gebremicael’s antics towards him, the 23 year old Johanna Hailemariam (pictured) told a close friend that Debretsion who occasionally hot desks in her father’s office and attends the recently down sized Sunday mass at the palace has become the family’s worst nightmare.

Not just Debretsion’s bloody past, but it is his cruel gaze that terrifies the family including Hailemariam himself who is yearning for some privacy.

“Hailemariam doesn’t want both Debretsion and Pastor Daniel Gebresilasse near his family but he has no choice or the right to refuse what the minority junta offers him.” An insider told the Horn Times by phone from Addis Ababa.

The former Dandi Boru prestigious high school pupil who is currently studying at Addis Ababa University, Johanna Hailemariam was bitterly complaining about the harsh treatment her family has been subjected to, especially since voice recording devices and secret cameras discovered in her father’s bed room, allegedly placed there by super spy Debretsion himself,  few months ago.

According to her close associates at the campus the girl wonders why her father, a water engineer by profession accepted such a humiliating job at his family’s expense.

“Our freedom of speech, freedom of worship, freedom of association and freedom of movement are all sacrificed. Even freedom to privacy is gone since we moved in to that prison (the palace).

“On hot summer nights we are not allowed to hang around the swimming pool after 8 o’clock. An ordinary Tigre palace guard has more power than my father- the prime minister of Ethiopia.” The distressed girl told her female friend whose name is known to the Horn Times.

Every day the family painfully watches Hailemariam behaving so obsequiously to his Tigre masters and they know that despite denials he is not allowed to leave the compound of the palace without notifying Debretsion, however pressing the reason.

Prime Minister Hailemariam Desalegn who in 2009 received a hot clap across the face in the parliament’s lounge from the fiery Azeb Mesfin for breaching minor protocol was appointed to the post after impressing the ruling Tigre hierarchy by condoling with them when they lost the rogue bandit Meles Zenawi to cancer in 2012.

But what catapults him to the highest office in the land was the performance of his Hench men in the town of Sodo where the entire ethnic Wollaytas were forced to perform a melodramatic traditional all-day mourning ritual reserved for kings. The fake tears and gnashing of teeth for the dead warlord Meles Zenawi somewhat convinced TPLF king makers Sibehat Nega and Bereket Simeon to offer him the job.

However, few months into his new career, they reduced him to be a mere drudge in the office of his nemesis Deputy Prime Minister Debretsion Gebremicael, the man who hails from Tigrye republic.