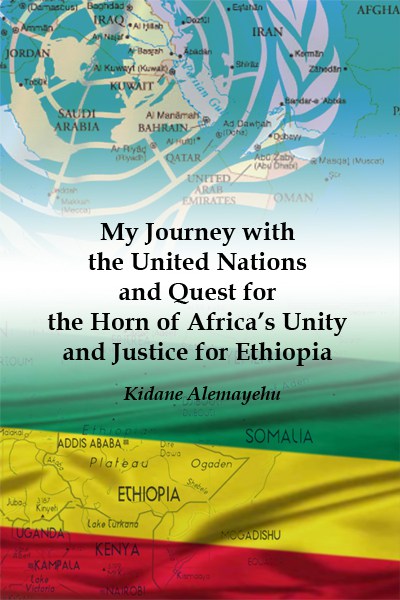 The journey which author Ato Kidane Alemayehu chronicles in his new book takes him through Lesotho, Tanzania, Uganda, United Arab Emirates and the Horn of Africa as a representative of the United Nations, and ultimately to establish an organization dedicated to confronting “Fascist Italy and the Vatican.” His book contributes valuable information to the history of East Africa, the United Arab Emirates, and to the rationale behind Ethiopia’s struggle to win recompense from Italy for crimes committed during the Fascist era.  Ato Kidane describes his varied experiences in beautiful, lucid English, and indeed it is a credit to Ethiopia and its educational system that the United Nations looked to her for qualified people to serve in other African countries.

A Successful Journey for Development

The first country Ato Kidane served was the Kingdom of Lesotho, where he went in 1972 at the request of the UN to serve as Director of Posts, Telecommunications and Civil Aviation.  Once there, Kidane’s central problem was human and financial resources.  Many of the offices, including Posts, Telecommunications and Civil Aviation, were staffed by expatriates.  Since Kidane wanted the national Basotho (pl. of Mosotho) to run their own country, he immediately designed a training program for nationals, including Mothibi as supervisor. The Assistant Director, a South African, was amazed at this plan and asked, “Do you want to train Mothibi? He is no better than a monkey!”  For his part, Ato Kidane was greatly satisfied with the training and performance of the nationals, one of whom, Percy Mangoaela, eventually took over as Director.

“Upon completion of my assignment,” writes Kidane, “I was ready to depart Lesotho for Ethiopia when, however, the Lesotho Government and the UN came up with another idea!” Kidane’s next assignment was Permanent Secretary for the Ministry of Works.  The list of Kidane’s achievements in modernizing Lesotho, as testified by the country’s authorities, is impressive. Thanks in great part to his tireless efforts, airports were built, pilots were trained, rural cities and neighboring countries and cities (Maseru, Johannesburg, Swaziland, and Mozambique) were connected by air, and all weather roads were built to connect many cities. Other highlights include Ato Kidane’s leading a Lesotho delegation to Cape Town, South Africa, to resume water negotiations that led to the building of the huge Katsie Dam and water self-sufficiency for the country, and the fact that under his watch a Lesotho national was assigned to the chair of the Director of Posts, Telecommunications and Civil Aviation.

In 1979 Ato Kidane moved to Tanzania where he served in the Ministry of Capital Development, representing the United Nations as an expert. “The Ministry’s main purpose was to set the policy and strategy as well as oversee the development of a new capital city at Dodoma, located at the center of the country. The implementation of the capital city’s development was the responsibility of the Capital Development.”  The responsibility included policy and planning, coordination and transfer programs, land use, and administration and finance branches, low-income housing.   In 1981, Kidane was transferred from Tanzania to Kenya, to the headquarters of the United Nations Center for Human Settlements, located in Nairobi, where he served for a year as Inter-Regional Consultant at the UN Center for Human settlements (UN Habitat).  Since Nairobi was the center serving many African countries, during this posting Kidane traveled to Uganda, Malawi, Botswana, Swaziland, Nigeria, and The Gambia.   Kampala in particular was a difficult place at that time, as Idi Amin Dada had just been ousted and the city was neither stable nor safe.  Yet, with courage and good luck, Kidane’s mission there was successful.  “The overall strategy was to bring about a speedy recovery of the shattered economy,” he writes.   Kidane’s book reminds us that a lack of human resources, migration from rural to urban areas, population growth, lack of energy sources and easy access to water are problems shared by most African countries.

No sooner than he migrated to the United States, Ato Kidane was offered an assignment he could not resist: he was invited to give assistance to the Ministry of Public Works and Housing in the United Arab Emirates.  He went to Dubai in 1982 to commence a one-month consultancy service that eventually became a two-year term of service.  During the first month review of the Ministry’s overall policies, plans, and performance, he discovered that the Ministry was facing serious challenges in virtually all aspects.  On the basis of his findings, Kidane presented to the authorities his fitting recommendations to solve the daunting problems the Emirates faced.  After his ideas were thoroughly scrutinized, and were found adequate, he was asked to lead a team to implement his recommendations.  The success that followed is recorded on pages 76-88.

Ato Kidane writes that “Dubai Municipality is a success story by international standards. More than anything else, what Dubai Municipality has clearly demonstrated is the fact that a leadership with the courage and unbound vision, firm principles of accountability and transparency and the wisdom to apply modern systems of management, technology and methodologies would achieve positive results. The Municipality’s ability to formulate sound policies, strategies, systems and action plans have enabled it to transform Dubai from being a mere fishing village less than half a century ago to its present international cosmopolitan center of commerce, tourism and industry competing with urban centers such as Hong Kong, Singapore and other such renown cities.”   It is no surprise that the story of Dubai has the lion’s share of My Journey with the United Nations. The book is also a reminder that the United Nations, including the agencies that facilitated Kidane’s services in the various countries, namely, the UNDP, ITU (International Telecommunications Union), and UN-Habitat deserve appreciation for their contribution to the quest of institutional development in Africa and the Middle East.

If only they have ears to hear

Soon after he retired from the United Nations, Ato Kidane shifted his focus to the countries of the Horn of Africa. He devotes three chapters of his book to them: “Horn of Africa’s History and Challenge” (chapter 6), “Vision for Horn of Africa’s Peace and Development” (chapter 7), and “Red Sea Cooperative Council” (chapter 8).   Despite the well-known and difficult problems of the region —abject poverty, famine, epidemics, and civil wars— Ato Kidane writes that it is his “considered view that there are good prospects for hope in this beleaguered part of Africa.  Such a hope, however, presupposes a more vigorous effort by all internal and external stakeholders, including governments, non-governmental and international organizations as well as academic institutions in the formulation, promotion and achievement of appropriate socio-economic and political development strategies for the benefit of the region and the international community.” (p. 180).

One wonders if the Horn of Africa countries will ever follow through on Ato Kidane’s recommendations.  Unfortunately, these countries have not been endowed with leaders dedicated to its development, and one is reminded of the Amharic proverb, ከሞኝ ገበሬ ደጃፍ ሞፈር ይቈረጣል “One cuts a highly-priced plow-log from the backyard of a fool farmer.”

Eluding Death for a Cause

In March 1981 Ato Kidane and other members from the UN flew from Dar es Salaam to Dodoma, in central Tanzania, apparently in a chartered plane, to participate in a meeting to resolve a controversy between the Tanzanian government and the UN Department of Technical Cooperation and Development. Several officials some of whom came from New York attended the meeting. Ato Kidane recollects: “During the meeting, it was decided that I remain in Dodoma for a few more days to follow-up on issues concerning my work with the Ministry of Planning. . . I learned later in the morning that the UN team that had flown from Dodoma had perished because of the plane’s crash due to adverse climatic conditions. . . My time was obviously not up” (p. 53).

No, Ato Kidane’s time was not up. As reported in chapters 9 and 10, he had yet to “Cry for Justice” for the Ethiopian people for the crimes the Fascists committed against them, and to demand an apology from the Vatican, reminding it that this is no more than Christian penance, for its “Complicity with the Fascists.” “If there is any country that can be clearly identified as a nation that has been the victim of huge war crimes and destruction, despite its membership of the League of Nations, but continues to this day to be denied the justice it deserves for over (80) years, it is Ethiopia,” writes Ato Kidane, referring to the crimes the Fascists committed against Ethiopians during their invasion in 1935-41 with the connivance of Vatican leadership. “My concern with the Fascist war crimes in Ethiopia and the Vatican’s complicity”, writes Kidane, “dates back to my younger days when I was told stories by my father about the war he participated in Eastern Ethiopia, the Ogaden” (p. 296) 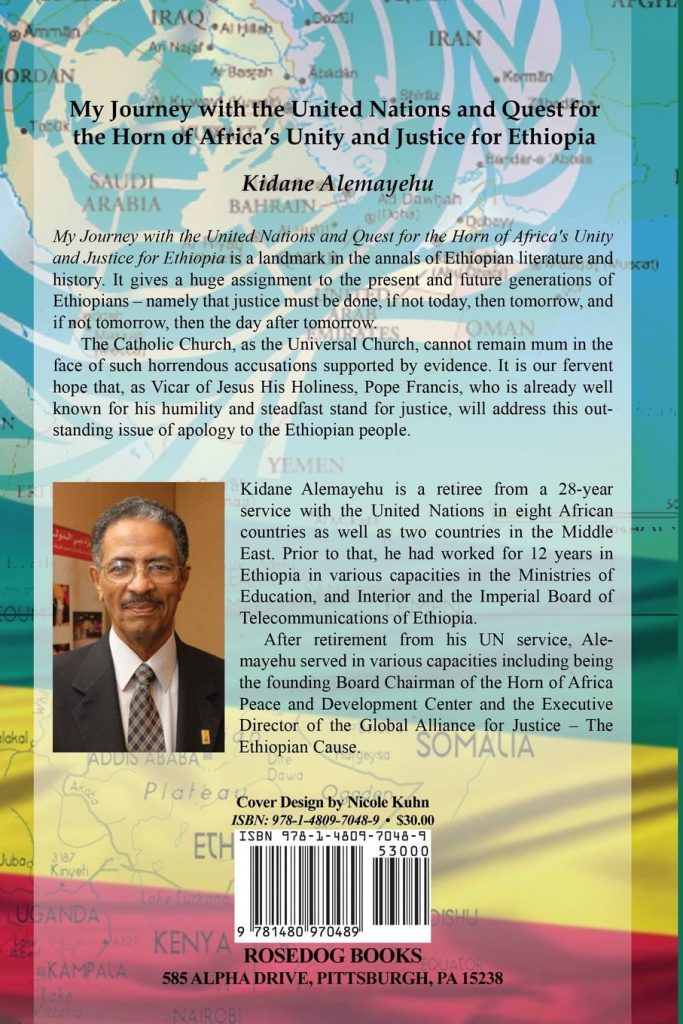 Kidane started his challenge of the Italian government and the Vatican by writing a letter in 2005 to Pope Benedict XVI. The occasion was the Pope’s visit of a synagogue in Nuremburg, in Germany, and his statement that the Nazi holocaust against the Jews was an unimaginable crime. In his letter Kidane reminded the Pope “about one other issue that has been awaiting justice for a long time and that the Ethiopian people deserved a Vatican apology” (p.269).  Since then he has continued his campaign, establishing an organization, Global Alliance for Justice: The Ethiopian Cause.  The historical facts justifying The Ethiopian Cause are convincingly narrated in this book and in many articles Ato Kidane has authored since he established the organization.  Historians who have seen the documents of the time agree with his positions and are cooperating with his demands for justice, reparations, return of looted properties, and an apology from the Vatican. The Global Alliance is not demanding more for Ethiopia Italy repaid to Libya, a country against whom Italy’s crimes were considerably less severe.

As for the Vatican and Pope Pius XI’s complicity, it has been argued that Benito Mussolini would have put the Catholic Church in great danger if the Pope had opposed him. Even if one accepts this untenable argument, there is no reason why the leadership of the Church cannot now apologize for its role during the war.  Kidane has made it his mission to see that Ethiopia be given the respect it deserves, and it seems he will not rest until he has succeeded. He is not pleading but demanding.

To sum it up, Ato Kidane Alemayehu has written a book that has contributed to the history of East Africa, the United Arab Emirates, and to an understanding of Italy’s crimes against the Ethiopian people by presenting facts and information not known in other sources.  The valuable services Ato Kidane rendered to the countries he consulted are testified to by the grateful authorities of those nations.  As a primary source, then, the book’s only shortcoming is that it has no indices.

PS. Your support in the quest of justice for Ethiopia is herewith requested by signing the petition you can find at (globalallianceforethiopia.org) calling on the Vatican to apologize to the Ethiopian people for its complicity with Fascist Italy’s war crimes in Ethiopia during 1935-41.

The book is available here for sale.