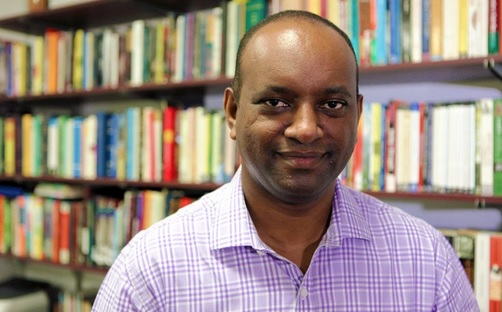 Whenever and wherever he pauses to communicate, be it in interviews, friendly chats, academic discussions, or in speeches he delivers, Elias Wondimu returns to a common phrase: building bridges. It is like a mantra for him. For all his focus on bridges, he is not a civil engineer in the traditional sense of the word, but he an engineer of a different kind—one who builds bridges with words between generations, ideologies, continents: Elias Wondimu the bridge builder.

On February 25, at the Army and Navy Club in Washington, DC, at an event organized by the Crown Council of Ethiopia, Elias served as keynote speaker and, as usual, he was very enthusiastic about bridges. His invitation to the event was not only as keynote speaker, but also as the recipient of the Grand Officer of the Order of Emperor Menelik II (GOEM) for his two decades of dedicated bridge building as the founder of Tsehai Publishers. The day was a thank you, a deserved recognition for a person who has spent the good part of the past two decades laboring behind an ideal of honoring the stories and history of a people, writing and editing stories about his native Ethiopia, and most of all laying the foundation for what have become his dreams of bridging the gaps between the present and the past through stories.

For the select audience of dignitaries and families at the gala dinner, Elias stated: “at TSEHAI, we see our goal as bridging the gulf of misinformation and lack of facts with strong cable fibers of publishing and easy access to these information; through availing inclusive and fair platform where contentious discourses could take place–more often through encouraging national leaders, opponent politicians, academicians, travelers and diplomats to document their history and experiences for posterity.”

For Elias, Ethiopian history, despite its glorious longevity and wealth of diversity, has not been blessed with its deserved representation in the marketplace of stories. Elias first came to that sad realization when he was a university student and faced a scarcity of documents and books on Ethiopia, and the harsh reality that those few that were available were not accessible to him. Books on Ethiopia in general, and Ethiopian history in particular, simply could not be found at a place where they could be accessed, ordered and bought.

Elias, however, was never one to leave an unfortunate situation aside. He was determined to change this sad reality into a lifelong dream of searching for, and publishing books on, Ethiopia, whose history is as glorious as that of any nation on earth. Determined to end this lack of representation on the history shelves of universities around the world, he chose to act.

“If the history of a country is like a bridge,” Elias stresses, “the Ethiopian bridge bears many gaps in the form of the millions of stories yet to be told; and if those gaps are left unfilled, there is the danger of uninformed or misinformed generations ahead of us.” And for Elias, the problem was twofold. First, most of the books on Ethiopia that had been published were either not in print or out of print, and the few available copies were found in limited circulation and located at a smattering of universities. The second and most important problem was that there was a visible lack of a system enabling Ethiopian books to be published with world-class quality. He found a calling in that absence. That was when Elias launched Tsehai Publishers as a means of building bridges through telling stories.

As Elias stated in his speech at the gala dinner, there are moment in everyone’s life for decision and action; because “if we have to have a kind of world of greatness, human dignity and equality where our story is represented through the prism of truth, where our songs are sang and our dreams are dreamt by our children, should we find the fair world we want, it is incumbent on us all to create it through every small gesture of safeguarding, collecting and spreading the truth.”

Just after a few weeks of the recognition by the Crown Council of Ethiopia, Elias was yet again awarded for his great contributions by a California-based civil society organization called Pagume Ethiopians Entertainment Center. And like every time he is in communication regarding his career as a publisher, he was talking about building bridges and the importance of building them between generations. At the event, held on March 4, 2017, at Loyola Marymount University in Los Angeles, Elias received his award along with Ambassador Ahadu Sabure, a renowned Emperor Haile Selassie-era journalist and public servant, and Professor Adugnaw Worku, a scholar, poet and cultural icon.

In his speech, Elias stressed the importance of building bridges between generations by calling for all Ethiopians to make an effort to educate their children as well as capture, record and store the stories from their elders because that is the only way we can learn from the past and form our own informed decisions about each other.

His words go with his actions, as Tsehai Publishers, along with the publishing of more than one hundred books, has launched nationwide open discussion platforms for informed conversations as well as launching the International Journal for Ethiopian Studies and the Ethiopian Journal of Religious Studies. For the past many years, the Tsehai conference has served as one of the most engaging academic forums for scholars from all over the world to gather and share ideas and perspectives on Ethiopian studies as a discipline and Ethiopian history.

Although Elias has sacrificed a lot in terms of losing personal time, pleasures as well as money for his dreams, he doesn’t seem to mind as he remains energized to do more. One of the dignitaries on the occasion of his recognition by Pagume, the renowned artist Debebe Eshetu said that, “Although exile is not a thing one wishes for anyone, looking at what Elias has achieved the past two decades, and the incredible contributions he has made, I would say [his] exile to America for good reasons.”

After receiving the award, Elias said: “There are those who ask, how did you manage to do all this? And I say to them, how could I not? I am the son of Lalibela who built a monument while living in tents. I am the son of the builders of Axum and of Fasilides, who built great monuments and left legacies for posterity, that doing what I should, everything I should, to honor the country and history that I call mine, is warranted.

Still energized and ready to serve the country and the community at large, Tsehai furnishes one of the great gifts to the Ethiopian community to use the various platforms already created to cultivate storytelling, to publish books, to contribute articles for journals, and to participate in the Tsehai Salon discussion forums.

Tariku Abas is a writer based in Silver Spring, MD and teaches English as a Second Language at Montgomery College.