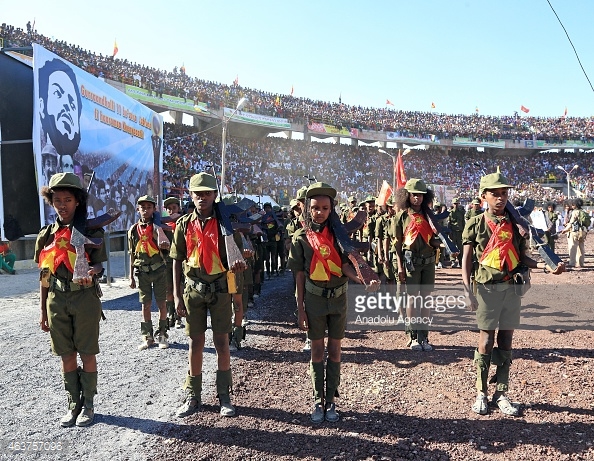 This article has bearing on the ethno-genesis of the TPLF as an ethno-nationalist movement. Although the alleged “Amara oppression in Tigrai” is projected as the main cause for the emergence of, what has now become, a very virulent Tigrean ethnic nationalism, the underlying problem of ecological degradation in Tigrai which significantly contributed to the ethno-genesis of this movement has been hardly touched upon. It is this salient aspect which I have tried to elucidate in this article. One can only understand the aggressively expansionist nature of the incumbent Tigrean fascist state and the violent inroads it made into fertile districts of Gondar as early as December 1979, when one grasps the underlying ecological degradation which created Tigrean social Darwinists who think that the strongest (Tigreans) should survive by killing the weakest (non-Tigreans). This expansionist drive of Tigreans has not stopped at Gondar but has spread its cancerous tentacles into all nooks and crannies of Ethiopia, including the capital city Addis Ababa & its outlying rural areas. Whereas the expansion of Addis Ababa into the outlying rural areas of Addis Ababa has provoked massive Oromo protest, the systematic displacement of long-time residents of Addis Ababa and their replacement by new rich Tigreans has hardly received attention nor led to a massive urban protest commensurate with the scale of the displacement. I believe that  the number of long-time Addis Ababa city residents deliberately displaced from their houses and neighborhoods (in which generation of their families lived) by far exceeds the number of those displaced from the outlying rural areas of Addis Ababa. This systematic displacement of residents of long-time inhabitants of Addis Ababa city is a product of a social engineering process that has rendered these erstwhile residents of Addis Ababa helpless and dehumanized. This article which I wrote in 1994, was then published in the now defunct Ethiopian Register monthly magazine based in USA which many Ethiopians were not able to access. This article would help readers grasp the ecological dimension of Tigrean ethnic nationalism which impelled the Tigrean fascists state to create Lebensraum (a German word meaning extra space needed for for the survival of a superior people) which German Nazis created for Germans by occupying lands that lay beyond the German borders (in Poland, Czechoslovakia, etc). I believe and I shall show, with sound arguments, that TPLF has evolved into a movement whose features bear the hallmarks of a fascist state.

A paper which builds on the theme of Tigrean fascism as an expression of ultra-nationalist Tigrean movement that hyperbolizes the identity of the Tigrean ethnic group by establishing a supremacist apartheid state in Ethiopia will follow soon. Fascism is the apogee or apex of an ultra-nationalist revolutionary mass movement that glorifies the unique virtues of a particular ethnic group and it is suffused with issues such as the purity of the blood of a superior ethnic group (i.e.Tigreans in this case) and the inferiority of the other ethnic groups i.e. non-Tigreans. Fascism mobilizes people who are in the throes of deep socio-economic problems with message of hope that heralds the rebirth of a new country and new people out of the ashes of a dark past. It glorifies violence, it cultivates and exudes hubris among its followers. These are things which we have been witnessing in Weyane’s Ethiopia. The recent video images beamed on you tube (a few days after hundreds of Ethiopians were killed in Gondar, Bahr Dar, Aweday, Ambo, Nazareth, Robe, etc) in which hundreds of learned Tigreans, many of them long-time residents in USA, were enthralled by the hypnotizing and blinding effect of Tigrean fascist hubris that has struck deep roots in contemporary Tigrean society. That spectacle eloquently speaks of the pervasive hold of Tigrean ethnic nationalism on Tigreans & the lack of empathy and sensitivity (to the pain of the ethnic others) it generates among its followers. Today Tigrean fascism, like all fascist movements before it, has imbued and fired ts fanatic followers with a sense of superiority, extraordinary sense of patriotism that glorifies the identity of the Tigrean ethnic group and exudes contempt for non-Tigreans. My forthcoming paper, which is divided into several parts, is written in Amharic language as I hope to reach as many Ethiopian readers as I possibly can. (Please click here to read the article)