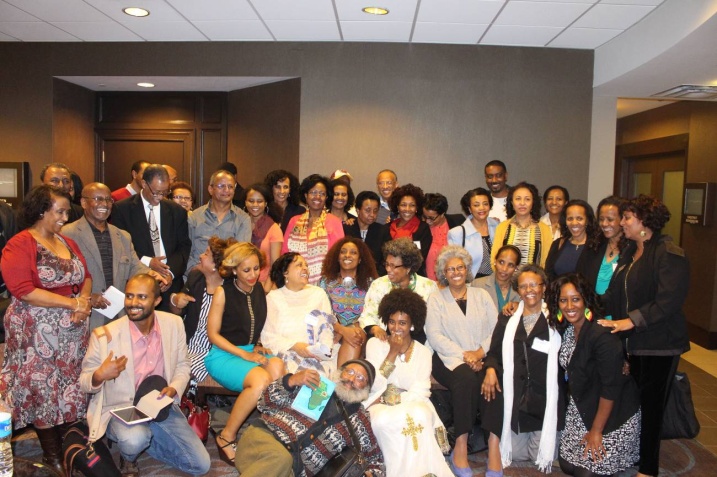 The program started with CREW member, Hiwote Mekonnen, introducing the objectives of the conference and introducing Dr. Maigenet Shiferraw, President of CREW. Dr. Maigent gave a brief preview of the short history of CREW  and outlined the theme of the conference.  Dr. Maigenet thanked the sponsors of the Conference: Tadias Magazne, Tsehay Publishers, ESAT Television & Radio, Sankofa Café and Gebeta Restaurant.

The opening speaker, Chereace Richards. is a successful business woman and a motivational speaker. She is the author of Faith, Focus, Action: The Journey to Becoming Who you are.  Chereace captured the mission and vision of CREW and spoke on how members of CREW should focus and take actions to fulfill their dreams.

The first session was moderated by CREW member, Tizita Belachew. Drs. Minga Negash and Seid Hassan spoke via Skype from Colorado and Kentucky, respectively. Dr. Minga Negash and Dr. Seid Hassan’s presentation was very educational.  Their presentation set the framework for the conference by explaining the push and pull factors of migration in general and Ethiopian outmigration in particular. The third speaker on the same session was Tadella Fanta, gender specialist and member of CREW. Tadella has done research in Yemen and Sudan about migrant workers. She spoke on the gendered nature of migration.

The second session was on the current situation of Ethiopian women migrant workers in the Middle East and the returnees from Saudi Arabia.  The moderator was Dr. Menna Demissie, senior policy analyst for Congressional Black Caucus Foundation.  The speakers were Dagmawi Yimer, a film maker; Jomo Tariku, a designer and who works at the World Bank; researcher, Helen Afework, and CREW member Genet Derbe, a social worker.

A clip of Dagmawi’s, film titled “Like a Man on Earth,” a moving story of Ethiopian migrant workers in Libya was shown.  After the showing of the clip, Dagmawi spoke about his personal journey and experience in Libya. Jomo’s presentation was on using the digital/social media to do effective advocacy work. Jomo created a website in 2012 after learning what had happened to Alem Dechasa in Beirut . The website is designed to document the number of Ethiopian migrant workers and their conditions in the Gulf countries. 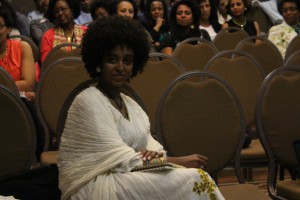 Helen Afework, a young researcher and a graduate student at the European Masters in Migration Studies in Germany was the next speaker.  Helen is currently in New York on a fellowship program at the National Domestic Workers Association to study domestic workers in the United States.  Her extensive work on domestic workers in the Middle East gave a clear depiction of the condition of migrant workers in the Middle East. Helen Afework is a recipient of the 2014 CREW scholarship. Amsale Aberra a young scholar from the University of Washington was the 2013 CREW scholarship recipient.

The last presenter for the second session was CREW’s treasurer and project manager of CREW’s pilot program, Genet Derebe.  CREW has started a pilot program with a non-governmental organization, Integrated Family services Organization (IFSO), to settle four returnees from Saudi Arabia.  A video of the project was shown. The pilot project was sponsored by the donation CREW received from ESFNA at their 30th annual soccer game in Washington, DC. As more Ethiopians are and will be repatriated from different parts of the world, both IFSO and CREW are willing and hopeful to continue this project to serve more returnees with the support of Ethiopians in the Diaspora.

The third session was moderated by CREW’s member, Aleme Feyisa, a social worker. The session was on conflict transformation.   Solomon Tilahun, a specialist in conflict resolution, was the presenter.  This was Solomon’s second time to present at CREW’s meetings.  Solomon’s presentation was excellent. The presentation focused on the culture of tolerance, dialogue, and conflict transformation.

The last session was moderated by CREW member Mahdere Paulos, a Lawyer and former Executive Director of the Ethiopian Women’s Lawyers’ Association in Ethiopia.

The last session was very powerful with all the young researchers and presenters together on the same panel.

The first presenter at the last session was Pastor Mekibeb Tilahun who is living and helping Ethiopians in Saudi Arabia.  He discussed the current situation of Ethiopians in Saudi prisons. The second presenter was Rima Kalush a senior researcher at Migrant-workers.org, a Bahrain-based organization.  She participated via Skype from California. Dr. Menna Demissie was the third presenter and spoke on networking with other community organizations and advocacy.

After the last presentation the floor was opened for Q&A and it allowed excellent participation by the audience. Recommendations were given by the participants.

Recommendation by conference presenters and participants:

Specific Recommendations from the audience

Special thank you to Kumera Genet, an activist and a columinist for the Huffington Post. Kebadu Belachew,Matt Andrea, Konjit Taye of VOA, Alem Fekade of Netsanet LeEthiopia radio, Abebe Belew of Addis Dimit radio and ECADFForum website. Thank you to all the speakers for the excellent and educational presentations. Thank you to the moderators for an excellent job in facilitating the panels. A very special thank you to all the participants who made the 3rd Annual Conference of Ethiopian Women in the Diaspora a success. We hope to see you all at CREW’s next event.