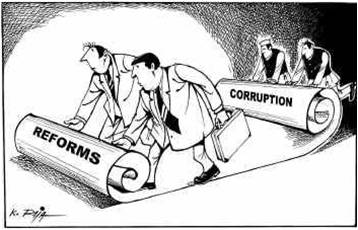 The legal measures undertaken by the Ethiopian regime last week has once again brought about the issue of corruption to the spot light. According to the statement released by the Ethics and Anti-Corruption Commission of Ethiopia, high ranking government officials and prominent business personalities have been arrested for their alleged involvement in corrupted practices. A measure against such high profile personalities prompts us to look at the various perspectives of addressing corruption in the country.  The measure gives an impression that the regime is determined to fight the rampant corruption in the country. But there are numerous issues surrounding the problem of corruption in the country and its implications.

Some commentators associate the measure taken by the regime in relation to the internal strife emerging within the party after the passing way of the godfather of the regime some eight months before. After the deaths of the only unifying force within otherwise a fragmented EPRDF leadership, the emergence internal struggle for dominance is a natural sequence. After all, applying the parameters of corruption to root out dissent within EPRDF is not a new phenomenon. Leaders of EPRDF, particularly Meles Zenawi, have been applying the rhetoric of fighting corruption to attack political opponents. The imprisonment of the former prime minister of the country Tamerat Layne as well the veteran TPLF leaders such as Seye Abreha in 2003 were largely associated with the use of corruption rhetoric to purge out power rivalries with in TPLF and the larger EPRDF circles. If the current campaign against corruption is taken in light of the rivalry among the various factions within the vanguard party, the implications are more serious to the survival of the regime and stability for the country in the short term since the power struggle is now conducted without any apparent ‘big man’ that may manipulate the power play to emerge victories. Due to this new scenario, the consequences of this power struggle may not be a limited one as it was before.

To emerge as victors in this power rivalry, each group will use every opportunity to attack the strong hold of the other groups. The problem will make the issue complicated as security officials and army generals are also involved in the power struggle and they are implicated in the rent-seeking trends rampant in the country. The involvement of the security and the military in the power struggle will create division that leads to conflict within the army. This will in turn creates political instability having serious implications to the country given the ethnicized political environment and the precarious economic situation that has been galvanized by hyper inflation. Since there are no strong institutions such as the media, civil society groups or other governmental institutions that may facilitate the smooth transition, the division may take the country into an unpredictable situation we have never dreamt of.

The other perplexing question with regard to the contemporary campaign against corruption is whether the regime is willing and capable of fighting corruption to the very end. In order to have some response to the issue, it is imperative to study the nature and behavior of the Ethiopian regime. In light of the power relations and the decision making process that have been developed within the regime, there appear to be no efficient system that could fight corruption effectively. As a typical African state, the Ethiopian regime is a neopatrimonial one where patrons use state resources in order to secure the loyalty of clients in the general population. Such a system is characterized by an informal patron-client relationship that can reach from very high up in state structures down to small villages.This has been the case with in the EPRDF controlled regime in Ethiopia. The regime claims to have more than 6 million members and increasingly forcing others co-opt with it for it has become increasingly difficult to get a job or freely conduct business without directly or indirectly supporting the regime.

EPRDF has monopolized productive resources such as land, capital, telecommunications, the banks as well as public utilities that expand rent-seeking behaviour. In addition to controlling government resources, the ruling party owns and manages businesses engaged in manufacturing and service industries that receive preferential access to land leases and credit. This has forced citizens to co-opt into the status quo for survival and obtain access to economic benefits. Since access to employment or benefits directly or indirectly requires loyalty to party policies, people are increasingly attempting to obtain favour in the eyes of the power holders rather than developing their competence, personal integrity and commitment to the rule of law.

The rent-seeking trend is exacerbated by the fact that the whole state machinery is largely controlled by less competent individuals who have much to gain by joining the ranks of the party. These less competent individuals are particularly attracted to the rank and file of the party structure due to their rent-seeking motives rather than because they are convinced by the system’s policies. From the beginning, their motive of joining the party is not ideological affiliation or commitment to public service. When such people are assigned to some positions, they immediately engage in corruption and due to lack of competence, they render poor public service. Such kind of personalities have infested the ranks and file of the institutions such as the parliament, the administrative agencies, regional legislative and executive organs up to the smallest kebele administrative units.

The whole power relation is entirely functioning on patron-client loyalty motivated by undue economic benefits rather than merit or ideological commitments. Such power relations have made corruption systemic in the country rather than an isolated incident you fight it through establishing anti-corruption commission or arresting few individuals. Since corruption is systemic in the country, fighting corruption to the very end will threaten the survival of the regime itself. Due to the threat to its very survival, the regime will stop the campaign against corruption at certain stage or only target junior government officials. If the regime determined to address corruption altogether, it is likely that the regime will disappears in the coming few years as its members and supporters will no more be interested to work with the system once they knew that the regime could not render them the benefits they were receiving for their support to the regime. The regime will be unlikely to engage in such kind of suicidal alternative that will wipe it out from its grip to power.

The regime’s action rather reminds me of a very interesting story we find in the bible under the Gospel of John chapter 8. In this text, Jesus went to the Mount of Olives and the scribes and Pharisees brought to him a woman taken in adultery. They said to him ‘Master, this woman was taken in adultery, in the very act. Now Moses in the law commanded us, that such should be stoned: but what sayest thou?’  But Jesus stooped down, and with his finger wrote on the ground, as though he heard them not.  When they continued asking him, he lifted up himself, and said unto them, He that is without sin among you, let him first cast a stone at her.  And again he stooped down, and wrote on the ground.   After that, being convicted by their own conscience went out one by one, beginning at the eldest, even unto the last: and Jesus was left alone, and the woman standing in the midst. In the same way, who in the regime is clean enough to accuse the others and cast the stone? One way or the other the ranks and file in the regime from top to bottom are engaged in corruptive practices. The very lifeline for the support of the regime is related to the army of supporters and members who have joined for job opportunities, financial incentives and getting priorities in public funds. Fighting corruption primarily requires clean hands and pure conscience!

The most effective way of fighting corruption is establishing accountable, transparent system where rule of law reigns. As things stands now, the percepts of revolutionary democracy do not permit the existence of independent institutions such as the media, civil society groups, effective parliament, the judiciary, Ombudsman and other democratic institutions that are instrumental in addressing corruption in the country. Without such institutions, it is almost impossible to address the trends of corruption consuming the country’s limited resources. The regime is unlikely to allow the existence of such institutions in the country as their existence amounts to the end of the police state it runs. What is the alternative way out? I presume we are yet to live with the rampant corruption in the country until the appointed time for freedom comes and we are able to install the institutions that address the root causes of corruption!