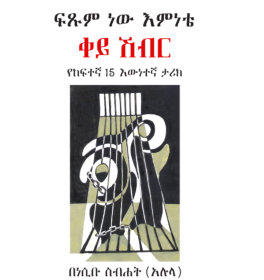 Critic’s note: this critical analysis contains “competing nouns”. Thus for clarity and specificity, I used a person or a thing name repeatedly instead of a pronoun. The images in this analysis were adapted from Google Images. Reading Ato Nesibu Sebhat’s book titled “ፍጹም ነው እምነቴ” bugged me so much because its stories are incoherent with his situation that he was a detainee, and some of his dishonestly presented stories are personal to me. Hence, I objectively and critically analyzed his assertions concerning the Higher-15’s detention camp’s reign of terror in Addis Ababa, Ethiopia.

I aim to prove whether his description of the Red Terror he claimed to be his experiences are retold, imagined, speculated or fabricated stories. Thus, I will evaluate and compare only one aspect of his stories which is the setting’s location. I will demonstrate beyond a reasonable doubt that Sebhat wrote something he never experienced and try to pass of as the truth and so by extension it means that he is dishonest. In other words, I will lay bare beyond doubt that Sebhat retold, he speculated, he imagined, or he fabricated the stories and dishonestly marked them as an honest account of his experiences. (Click here to read more)