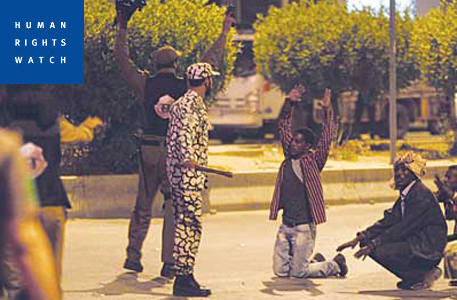 (Beirut) –  Ethiopian migrant workers have been the victims of physical assaults, some of them fatal, in Saudi Arabia following a government crackdown on foreign workers. Many workers seeking to return home are being held in makeshift detention centers without adequate food or shelter.

Human Rights Watch spoke to five Ethiopian migrant workers in Saudi Arabia. Four Ethiopians in Riyadh told Human Rights Watch that the attacks began after November 4, 2013, when authorities resumed a campaign to arrest foreign workers who they claim are violating labor laws. Security forces have arrested or deported tens of thousands of workers. Saudi officials and state-controlled media have said that migrant workers have also been responsible for violence, including attacks on Saudi citizens, in the wake of the crackdown.

Saudi authorities should immediately investigate assaults on Ethiopian and other migrant workers by security forces and Saudi citizens, and hold those responsible for violent crimes to account, Human Rights Watch said. Saudi and Ethiopian authorities should work to speedily repatriate undocumented foreign workers waiting in makeshift holding centers, if they have no fear of returning home, and ensure that they get adequate food, shelter, and medical care.

The most violent attacks occurred on the evening of November 9 in areas around the Manfouha neighborhood of southern Riyadh, where Ethiopian residents make up a majority of residents, according to local activists. Two Ethiopian migrant workers told Human Rights Watch that they saw groups of people they assumed to be Saudi citizens armed with sticks, swords, machetes, and firearms, attack foreign workers.

One of the Ethiopians, a 30-year-old supervisor at a private company, said he heard shouts and screams from the street, and left his home near Manfouha to see what was happening. When he arrived near Bank Rajahi on the road to the Yamama neighborhood, west of Manfouha, he saw a large group of Ethiopians crying and shouting around the dead bodies of three Ethiopians, one of whom he said had been shot, and two others who had been beaten to death. He said six others appeared to be badly injured.

He said he saw Saudis whom he called shabab (“young men” in Arabic), and uniformed security forces attack the Ethiopians who had gathered. The shabab were using swords and machetes, while some of the uniformed officers were beating the migrants with metal police truncheons, and other officers were firing bullets into the air to disperse the crowd. He said that he narrowly escaped serious injury when a Saudi man swung a sword at his head. It missed, but hit his arm, requiring stitches to close the wound.

The other Ethiopian witness, a 26-year-old undocumented day laborer who lives in Manfouha, told Human Rights Watch that he was sitting among a group of 23 Ethiopians in a private home on Street 20 on the evening of November 9 when a group of 20 shabab with machetes and pistols broke down the door and attacked the people inside. He and five other Ethiopians escaped by climbing to the roof, but he does not know what happened to the other 17 men.

Another Ethiopian worker who lives nearby, but who did not witness the violence, told Human Rights Watch that on the afternoon of November 9, he was sitting inside the Ethiopian community center and school compound five kilometers from Manfouha when 35 Ethiopian men came to the center.

The Ethiopian men said that groups of armed men were forcing their way into homes in Manfouha, removing the men, and holding the women inside. The person who spoke with Human Rights Watch said that the men showed him as proof a mobile phone video they said they surreptitiously filmed from a distance that appeared to show a Saudi man raping one of the Ethiopian men’s wives. He said the group told him that 10 other women were missing.

Since the evening of November 9, Ethiopian activists have circulated dozens of YouTube videos and other photos purporting to show Saudi men in civilian clothes and security forces attacking Ethiopian workers in Manfouha. Human Rights Watch cannot confirm the authenticity of these videos, though the incidents they purport to show largely match the witness accounts.

Saudi authorities should ensure that all incidents of apparent use of violence and abuse in Manfouha are swiftly and transparently investigated, and that anyone who committed a crime is brought to justice, including members of the security forces, Human Rights Watch said. The authorities should both address any unnecessary and unlawful use of force by security forces and take steps to prevent ordinary citizens from harassing or molesting migrants based on suspicions that they are violating labor laws.

Some Saudi sources blame the migrants for instigating the violence. Arab News, a local English-language newspaper, said that Saudi security forces entered Manfouha on the evening of November 9 to restore the peace after a group of Ethiopian men “went on a rampage in anger at the Kingdom’s ongoing campaign against illegal foreign workers.” It stated that one Saudi man died after “rioters” hit him with rocks, and that the 65 injured were “mostly Saudis and legal residents.” The Sabq news website reported on November 14 that Ethiopian migrants had stabbed to death a 14-year-old Saudi boy in Manfouha, reportedly asking him, “Are you Saudi?” before attacking him.

The five Ethiopian migrant workers who spoke to Human Rights Watch said that many undocumented Ethiopian workers in Manfouha have turned themselves in to the authorities since November 9, fearing violence from police and groups of Saudi citizens. One worker described the atmosphere in Manfouha as a “battleground.” The Ethiopian ambassador to Saudi Arabia, Muhammed Hassan Kabiera, toldArab News on November 13 that at least 23,000 Ethiopians, many from the Manfouha area, had surrendered to Saudi authorities for repatriation.

The Ethiopian workers said that authorities transported the Ethiopians to makeshift holding facilities across the area, including a large wedding hall and the campus of Princess Nora Bint Abdul Rahman University. One man told Human Rights Watch that he visited the wedding hall and saw thousands of foreign workers detained there, men in one area, and women and children in another, both inside and outside the building.

He said that Saudi guards give the detainees only one small meal of rice per day, and provide no access to medical attention. He said that other Ethiopians in the neighborhood are trying to help the detainees by bringing food, and that many at the hall had been left without shelter during recent heavy rainfall in Riyadh. One Ethiopian in Riyadh said he escaped from the wedding hall after officials held him in an area outside the building for 10 days, failing to supply the detainees with sufficient food, which forced them to buy food from Saudi guards.

Two Ethiopians in Riyadh told Human Rights Watch that people they knew who turned themselves in had not known that authorities would hold them in makeshift detention centers. They said that Saudi officials told them they would take them directly to Ethiopia. Saudi police officials say that the kingdom is spending one million Saudi Riyals (US$267,000) per day to house and feed thousands of detained Ethiopians.

On November 19, the Ethiopian foreign minister, Dr. Tedros Adhanom, announced that the government is doing “everything possible to repatriate citizens from Saudi Arabia within 14 to 25 days.”

“Saudi authorities say they are carrying out a crackdown on migrant workers humanely, but keeping thousands of people in makeshift centers without adequate food, shelter, or medical attention could lead to humanitarian disaster,” Stork said. “Saudi officials should release the detainees or send them home immediately.”

Saudi officials say that the ongoing labor crackdown against foreign workers, which includes road checkpoints and raids on businesses, is part of Saudi Arabia’s effort to combat high levels of unemployment among Saudi citizens by opening jobs previously filled by undocumented workers. Those targeted include workers who do not have the proper residency or work permits, and workers who are caught working for an employer who is not their legal sponsor. According to local media outlets, authorities have arrested and deported thousands of workers since November 4.

The violence between Saudis and Ethiopians follows months of local press reports blaming Ethiopian female domestic workers for brutal attacks against Saudi employers. In July, Saudi officials claimed that over 200 Ethiopian women had been detained in two months for “psychological problems,” leading the labor ministry to temporarily ban the recruitment of Ethiopian workers to the country.

Human Rights Watch has repeatedly called on the Saudi government to abolish aspects of the kafala or “sponsorship” system that create conditions for abuse, including rules requiring a worker to obtain permission from his or her employer to change jobs or leave the country. These rules leave foreign workers with little option for redress in cases of abuse or labor violations and force them into under-the-table work.

Please see below for more information.