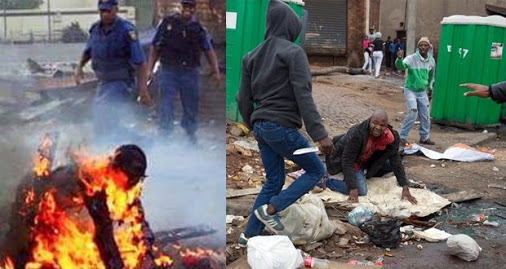 Former South African President Thabo Mbeki, speaking on Friday 24 June 2016 in Johannesburg.
“South Africans will kick down a statue of a dead white man but won’t even attempt to slap a live one. Yet they can stone to death a black man because he is a foreigner.” Zimbabwean President Robert Mugabe-Harare.

“The main reason for the spate of violence against refugees in xenophobic South Africa is that we are easy targets. Killing a foreigner in broad daylight and stoning the shattered corpse is a barbaric crime elsewhere but sacrosanct in hateful South Africa. Our plight here is very similar to the plight of the Jews people in Nazi Germany. Hated, robbed and killed. We are sub- humans to South Africans. We need urgent help. The UN must help us.” Daniel Tefera, an Ethiopian asylum seeker speaking after he barely escaped a mob attack in Mabopane, Pretoria.

******************************************************
Once the economic power house of Africa, now the third largest economy behind Nigeria and Egypt, how did South Africa completely lost her incandescent charm as land rainbow nation and becomes land of chilling racial disharmony and deceit; a death trap for defenseless refugees and black African migrants. Where is the so-called nobility of the human spirit in a country that burns, maims and kills refugees with increasing belligerence and consuming hatred?

In South Africa, almost every black person knows how to malign the already vilified and misrepresented refugees. Somali and Ethiopian refugees are referred to as “Makulas”. It literally means unschooled Asian labourers. The dark skinned African immigrants are called “makwerekweres”, which means blacks of lower caste living and working in a country of blacks of the upper caste, the South Africans.

Hostile to any foreigner, investor or immigrant, black or brown, as seen last week around Pretoria, South Africans can launch a highly coordinated attack anytime they go hungry, because in previous cases nothing was done to bring the culprits to book. According to those robbed and displaced refugees, the South African government’s inaction is tantamount to promoting the culture of impunity.

“Look, in a country where President Jacob Zuma himself was once embroiled in xenophobic tantrums after his well publicized Malawi gaffe, we no longer feel safe here. While South Africa invests millions across the continent and while South African companies operate peacefully across Africa, citizens of this nation bitterly complain about our tiny shops and rob us in broad day light. Then, instead of arresting the gangs, the government pronounces us refugees guilty and launches operation Fiela-Reclaim. That is how it is in South Africa and that is why we are calling for UN intervention to facilitate settlement in a third country. I lived under the shadow of death for ten dark years in South Africa.” Ethiopian asylum seeker Daniel Tefera told the Horn Times, drawing admiring gasps from other refugees who were standing around us during the interview.

“In South Africa, It is a massive blessing to wake up in one piece to live another.” Daniel concluded, fighting back tears.

Moreover, the refugees we spoke to inside the troubled Atteridgeville Township west of Pretoria on 27 May, are critical of eNCA tv news anchor-cum-reporter, a woman called Bongiwe Kumalo. The Horn Times watched the grim report where Kumalo made herself both the judge and jury and accused foreign nationals of killing an eighteen year old South African during last week’s mass heist around Pretoria.

“The teen was just walking down the road when two foreign nationals in a white van stopped him and shot him in cold blood.” Kumalo alleged in her biased report designed to fuel further riot and bloodshed.

“We are robbed, humiliated and battered. As if that was not enough, we are accused of killing an innocent young man.

For every social and economic ill, blame foreign nationals. The xenophobic reporter knew that she won’t be held accountable for her hateful and insensitive remarks. That is the attitude of South Africans.” Another refugee who gave his name as Sheik Karim added.

However, all refugees echoed the call made by an elderly Somali refugee who told ANN7 tv channel that the United Nations must urgently intervene to solve the crisis once and for all. None of the displaced were willing to give their real names and they appeared very nervous when asked to be photographed.

Tears flowing without measure, ceaseless as the interminable voices of the bell-cricket, tears of pity by human suffering in ungrateful nation called South Africa. Tears dribbling down from one cheek-a tear-streaked cheek. Enraged tears of the oppressed and the neglected foreigner in South Africa.

Some of the refugees lived in South Africa for more than twenty years. Toiling to make ends meet in a nation where they are less tolerated, robbed and killed. No country to go back to or no money to restart life. No strength to pick up the pieces.

Where to from here for robbed Ethiopian and Somali refugees?