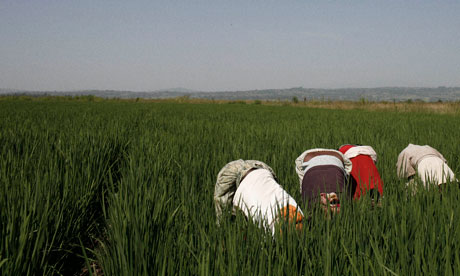 Ethiopia‘s leasing of 600,000 hectares (1.5 acres) of prime farmland to Indian companies has led to intimidation, repression, detentions, rapes, beatings, environmental destruction, and the imprisonment of journalists and political objectors, according to a new report.

Research by the US-based Oakland Institute suggests many thousands of Ethiopians are in the process of being relocated or have fled to neighbouring countries after their traditional land has been handed to foreign investors without their consent. The situation is likely to deteriorate further as companies start to gear up their operations and the government persues plans to lease as much as 15% of the land in some regions, says Oakland.

In a flurry of new reports about global “landgrabbing” this week, Oxfam said on Thursday that investors were deliberately targeting the weakest-governed countries to buy cheap land. The 23 least-developed countries of the world account for more than half the thousands of recorded deals completed between 2000 and 2011, it said. Deals involving approximately 200m ha of land are believed to have been negotiated, mostly to the advantage of speculators and often to the detriment of communities, in the last few years.

In what is thought to be one of the first “south-south” demonstrations of concern over land deals, this week Ethiopian activists came to Delhi to urge Indian investors and corporations to stop buying land and to actively prevent human rights abuses being committed by the Ethiopian authorities.

“The Indian government and corporations cannot hide behind the Ethiopian government, which is clearly in violation of human rights laws,” said Anuradha Mittal, director of the Oakland Institute. “Foreign investors must conduct impact assessments to avoid the adverse impacts of their activities.”

Ethiopian activists based in UK and Canada warned Indian investors that their money was at risk. “Foreign investors cannot close their eyes. When people are pushed to the edge they will fight back. No group knows this better than the Indians”, said Obang Metho, head of grassroots social justice movement Solidarity Movement for a New Ethiopia (SMNE), which claims 130,000 supporters in Ethiopia and elsewhere.

Speaking in Delhi, Metho said: “Working with African dictators who are stealing from the people is risky, unsustainable and wrong. We welcome Indian investment but not [this] daylight robbery. These companies should be accountable under Indian law.”

Nyikaw Ochalla, director of the London-based Anywaa Survival Organisation, said: “People are being turned into day labourers doing backbreaking work while living in extreme poverty. The government’s plans … depend on tactics of displacement, increased food insecurity, destitution and destruction of the environment.”

Ochall, who said he was in daily direct contact with communities affected by “landgrabbing” across Ethiopia, said that the relocations would only add to hunger and conflict.

“Communities that have survived by fishing and moving to higher ground to grow maize are being relocated and say they are now becoming dependent on government for food aid. They are saying they will never leave and that the government will have to kill them. I call on the Indian authorities and the public to stop this pillage.”

Karuturi Global, the Indian farm conglomerate and one of the world’s largest rose growers, which has leased 350,000 ha in Gambella province to grow palm oil, cereals maize and biofuel crops for under $1.10 per hectare a year, declined to comment. A spokesman said: “This has nothing to do with us.”

Ethiopia has leased an area the size of France to foreign investors since 2008. Of this, 600,000 ha has been handed on 99-year leases to 10 large Indian companies. Many smaller companies are believed to have also taken long leases. Indian companies are said to be investing about $5bn in Ethiopian farmland, but little is expected to benefit Ethiopia directly. According to Oakland, the companies have been handed generous tax breaks and incentives as well as some of the cheapest land in the world.

The Ethiopian government defended its policies. “Ethiopia needs to develop to fight poverty, increase food supplies and improve livelihoods and is doing so in a sustainable way,” said a spokeswoman for the government in London. She pointed out that 45% of Ethiopia’s 1.14m sq miles of land is arable and only 15% is in use.

The phenomenon of Indian companies “grabbing” land in Africa is an extension of what has happened in the last 30 years in India itself, said Ashish Kothari, author of a new book on the growing reach of Indian businesses.

“In recent years the country has seen a massive transfer of land and natural resources from the rural poor to the wealthy. Around 60m people have been displaced in India by large scale industrial developments. Around 40% of the people affected have been indigenous peoples“, he said.

According to Oakland, the Ethiopian “land rush” is part of a global phenomenon that has seen around 200m ha of land leased or sold to foreign investors in the last three years.

The sales in Africa, Latin America and Asia have been led by farm conglomerates, but are backed by western hedge and pension funds, speculators and universities. Many Middle Eastern governments have backed them with loans and guarantees.

Barbara Stocking, the chief executive of Oxfam, which is holding a day of action against landgrabs on Thursday, called on the World Bank to temporarily freeze all land investments in large scale agriculture to ensure its policies did not encourage landgrabs.

“Poor governance allows investors to secure land quickly and cheaply for profit. Investors seem to be cherry-picking countries with weak rules and regulations because they are easy targets. This can spell disaster for communities if these deals result in their homes and livelihoods being grabbed.”

Oxfam will be placing huge “Sold” signs on the Sydney harbour bridge, the Lincoln memorial in Washington and the Colosseum in Rome to mark its action day.