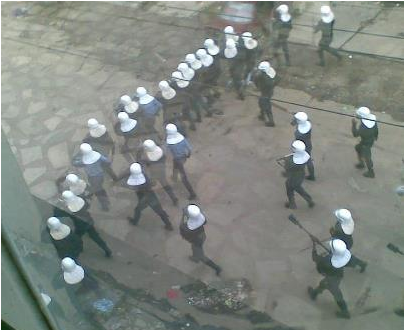 On October 08, 20016, a week after the horrific killings at the Irrecha holiday in Ethiopia’s Oromia region, the Ethiopian Council of Ministers has decreed a six month state of emergency that gives ultimate power to the authority to suspend basic and fundamental political and democratic rights granted under the constitution of the country,the African Charter on Human and People Rights and international standards of human rights.For many years in the past, the Ethiopian government has used laws, judicial processes, national institutions and its security forces to suppress its own people, to stifle political dissent, to harass and incriminate journalists, human rights defenders, opposition party leaders and their members, as well as peaceful protestors in a way that fails to meet those regional and international human rights standards.

AHRE is extremely worried that the decreed state of emergency could be also used by the authority as a pretext for escalating grave human rights violations and a political crackdown in the country. In the last 25 years the ruling party, the Ethiopian People Democratic Front (EPRDF), has been accused by rights groups of a poor record on the protection and respect of human rights. Since the taking power by the party, thousands have been killed by security officials. It is documented and reported by local and international human rights organization that hundreds were abducted, tens of thousands were arbitrarily detained and arrested without charge, many have been subjected to torture and ill-treatment, many others forced into internal displacement and eviction from their land.

Despite all these gross human rights violations in the country that have been also reported and documented by human rights groups there is no as such a strong condemnation and pressure from the international community against the Ethiopian government to improve the situation and encourage the state to respect its obligation to uphold the highest standards of human rights.

“The international community should stop pretending and staying blindfolded on the critical human rights situation of Ethiopia” said Yared Hailemariam, Director of the Association for Human Rights in Ethiopia (AHRE).  “In the last ten months, the response of the international community has not been adequate especially as the number of causalities is rising daily. There has not been any strong pressure on the Ethiopian government to stop the excessive use of force against protesters.The international community should do much more to stop the continuing violation of human rights in Ethiopia before the situation gets out of control and leads to political instability in the country, and as well in region of horn of Africa”.

In its recent press release, AHRE expressed its deep concern about the escalating human right abuses and mass killings in various parts of the country. It mentioned that also in the last eleven months since the beginning of the protest in the Oromia region more than 700 protestors advocating rights based issues have been killed by security forces routinely using excessive and unnecessary lethal force to disperse peaceful protestors. Also more than ten thousand people including community leaders, journalists, opposition leaders and human rights defenders have been arbitrarily arrested, many of them being held in various military centers without medical treatment and without access to family members and legal representation. This reputation and track record of the Ethiopian authority of mishandling protests and public grievance by using unnecessary and excessive force possibly will continue in a violent and reckless way during the state emergency in order to disperse protestors and to suppress any political dissent.

AHRE is also deeply concerned about the repercussion of the decreed state of emergency possibly leading the country into civil war and further bloodshed. According to our sources, in some parts of the Oromia and Amhara regions protests have turned into armed clashes. It is reported that many causalities have been observed on both sides, by the security forces and by the protesters as a result of the ongoing violent clashes which irrupted in both regions. Especially after the mass killing at the Irreecha festival more protests broke out in many areas of the Oromia region, and again dozens were killed, while many others sustained serious injuries. Properties were destroyed and fire was set to government owned factories and vehicles, as has been reported during the week.

AHRE has no doubt that the decreed state of emergency will lead to an escalation of the existing problem and a crackdown of peaceful protests. AHRE urges the Ethiopian authority to lift its decree as soon as possible, and to give proper response to the demands of the Ethiopian people raised during the protest.It also urges the Ethiopian government to: