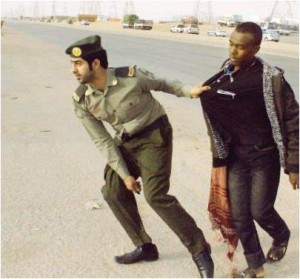 After vicious media campaign for more than 2 months in the intolerant Islamic kingdom of Saudi Arabia against Ethiopian immigrants, massive crackdown is currently underway targeting Ethiopians only with Saudi citizens asked to call 992 hotline to help police raid hideouts, flats or homes used or frequented by Ethiopians.

A group of MBC journalists who raised the outcry in the capital Riyadh kick started the onslaught yesterday 12 March 2012 by publicly parading two Ethiopians they captured in their neighborhood before handing them over to the notorious Saudi religious police.

Some Ethiopians the Horn Times spoke to blame the growing anti-Ethiopia sentiment in the repressive oil sheikdom on recent inflammatory statement made by Saudi Arabia’s deputy defense Minister Khalid Bin Sultan, accusing Ethiopia for the unending violence in Egypt and for the bone crashing economic hard ship in the Sudan.

Abdinur Shifa, 37, an Ethiopian health practitioner in Al – Qasim region of Buraydah suburb near the capital told the Horn Times by phone that a senior Saudi state security chief was picketing with police around Buraydah on Wednesday morning warning residents to handover Ethiopians or face prosecution.

“This morning (Wednesday 13 March) I saw Ethiopian mothers wailing and terrified infants crying as the police drive them out of Buraydah. It was very, very sad. Some of them were living in this area for more than ten years and their permits are valid. We don’t know yet what the Saudis are up to or if they strike a deal with the minority regime in Addis Ababa.” Abdinur who is a naturalized Saudi explained.

Moreover, according to Abdinur, the reported involvement of the army in the anti-Ethiopians crackdown around regions close to the border with Al Qaeda hotbed Yemen poses more dangers on Ethiopians living and working there unless human rights organizations closely monitor the situation.