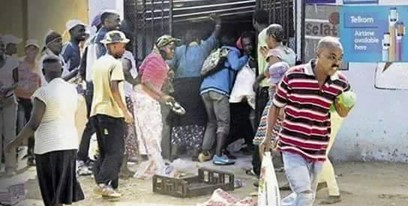 “In Russia, bread riots led to a revolution, here (in South Africa) they lead to xenophobia.”  Nomalanga Mikize, on Twitter

A nation in cantankerous mood and truculent society baying for blood. The air is thick with terror and despair of foreign nationals living and working in one of the world’s racially intolerant nations, South Africa.

Collectively known as Makwerekwere-a derogatory term for black African immigrants and Onomatopoeia-for other non-nationals who speak unintelligibly, life in the rainbow nation has become increasingly horrifying.

To black African refugees, the ongoing large scale plundering and brazen looting of shops owned by non-South Africans in and around Soweto  is a stark reminder of the 2008 vicious attacks that killed more than 60 defenseless aliens including the posthumously  iconic Mozambican laborer Ernesto Namuvane, who was set alight by a rapacious South African Rabble in Alexandra township.

Moreover, by a quirk of fate, Somali refugees are also still mourning one of their own sons, Abdi Nasir Mohamoud, 25. A video clip posted to You Tube on 1st of June 2013 shows the gruesome killing of Abdi Nasir, with young South African boys and girls kicking and hurling bricks and stones on the already shattered body near the city of Port Elizabeth. Hence resilient Somalis dread an imminent repeat of such violence.

For Onomatopoeias (Ethiopians), the name of 19 year old Michael is on everybody’s lips. The young man fled his country after tribal purge and ethnic persecution by the ruling minority Tigre junta left him destitute and bitter. However, sadly, the bright teen never attained the success and comfort he craved for here in South Africa.

Michael suffered an agonizing death when locals petrol bombed his tiny grocery shop in the volatile Natal province near the port city of Durban.

According to his friends, the boy was among the unlucky once that setup businesses in areas plagued by crime, poverty and rampant unemployment, creating combustible conditions for hate crimes and devastating xenophobic attacks. Such areas rarely serviced by the police in comparison to working middle class neighborhoods.

The current massive daylight heist and bloodshed started last week after death of a 14 year old teen, Sipiwe Mahori, drawn the ire of locals in Snake Park Township near Soweto. A Somali shop owner allegedly shot and killed the would- be robber in an apparent self-defense at his Roso Supermarket.

Then, within hours, lawlessness prevailed and greed spirals into disgrace. Raging Sowetans declared “free grocery for all” and as the news of the violent looting spread, residents of Kagiso, Langlaagte and Alexandra near Johannesburg went on the rampage, leaving behind trail of distraction that shocked the world.

The South African police service members, themselves accused of duplicity and even theft by shop owners, swiftly assisted some foreign traders with packing their goods and escorted them out of  troubled hotspots such as Emdeni, Zola, Protea Glen and Dobsonville.

“How does the problem South Africa faces in terms of poverty and crime be blamed on us refugees on the bases of our skin color and country of origin? We are being used as scapegoats by these serial xenophobes ” Abebe Demise,29, an Ethiopian spaza shop owner told the Horn Times while few meters away 21 year old looter Ntokozo Dlamini shouts “I hate them. I hate them. I want them to go through the pain.”

However, with local municipal elections approaching, some government officials including Gauteng’s community safety MEC are against branding the violence xenophobic, saying it is an act of pure criminality by some residents. Others blame inequality as the underlying cause of xenophobia in a country that hosted the largest number of asylum seekers in the world, furnishing refugees with freedom of movement, work permit and access to basic services such as health care.

“Look, despite all these we don’t want to sound ungrateful to the ANC government and the people of South Africa. But denying the existence of extreme xenophobia or trying to sweep it under the carpet as an inherent culture of criminality and lawlessness is a big mistake. Listen to the speeches of “David the intercessor”, the most honest politician I come across during my 10 years stay here in South Africa.”

Although tense calm has returned to Soweto, the premier’s office and the police warned the displaced shop owners not to return to their businesses on their own.

Furthermore, in langlaagte, an informal settlement outside Johannesburg where two South Africans died during looting, residents are openly vowing to take the law into their own hands.