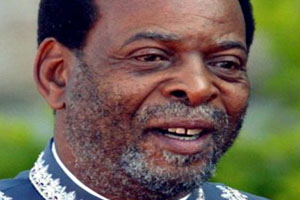 We must remove ticks and place them outside in the sun. We ask foreign nationals to pack their belongings and be sent back.”

These were top Zulu chief Goodwill Zwelithini’s (pictured) words in which he referred to foreign nationals and defenseless refugees as “head lice.” The speech then sparked the melodramatic April 2015 mass looting and brutal killings of foreign nationals in South Africa. The unrepentant local chief Zwelithini never took that one bold step to apologize but when the rest of Africa led by Nigeria began to rebel, a panicking Zwelithini asked for a face to face meeting with African leaders; openly and embarrassingly challenging the authority of president Jacob Zuma.

However, his demand was simply laughed off and a charge of Rights violation including incitement and sedition, was laid against the ragtag local chief Goodwill Zwelithini by Mr Tim Flack, a former South African MP turned social activist.

At the time, Flake alleged that among the rights the outdated chief Goodwill Zwelithini blatantly violated were the rights to dignity, security, life, movement and residence, contained in the Bill of Rights. The terrifying and extremely venomous speech delivered to his subjects in March 2015 was also a violation of the International Criminal Court’s Rome statutes.

Furthermore, shortly after then AU chairman, President Robert Mugabe strongly condemned the April 2015 brazen attacks on African refugees, a Nigerian human rights organization asked the International Criminal Court/ICC to investigate the cruel and cold-hearted Zulu chief Goodwill Zwelithini for hate speech that brought South Africa to edge and made this nation the killing field of indigent and defenseless refugees.

In a letter to ICC chief prosecutor Fatou Bensouda, the Nigerian rights group further asked her to investigate the alleged complicity or negligence of South African police in preventing the xenophobic attacks of April 2015, which claimed seven lives and displaced thousands.- A shameful black on black violence and self hate par excellence.

Why do black South Africans need to kill other Africans in such bloodcurdling manner? A black taxi driver replies “Because under Apartheid, fire was the only weapon we blacks had. We didn’t have ammunitions, guns and the likes. With fire we could make petrol bombs and throw them at the enemy from a safe distance. Today there is no need for distance any longer. To kill these foreigners, we need to be as close as possible to their body which we then set in flames or dissect, each blow opening a huge wound that can never be healed. Or if it is healed at all, it must leave on these foreigners the kind of scars that can never be erased.” The boastful driver told well-known African writer Achille Mbembe.

Even the eldest son 0f president Jacob Zuma, Edward Zuma, few months ago told News24.com that “We need to be aware that as a country we are sitting on a ticking time bomb of the foreigners taking over our country.”

Without any pretense, relation between South Africans and other Africans has always been that of contempt. Killing or maiming or burning a foreigner is not a punishable crime in South Africa. Just like his predecessor Thabo Mbeki, Pres Zuma is either unable or unwilling to protect refugees. According to victims, the rare intervention of police has been deliberately mistimed to allow looters ransack foreign owned businesses.

“Impunity breads impunity and bone chilling atrocities. It is the shortest way to a Rwanda like genocide. If these perpetrators cannot be brought to book by the South African government, it is time to get a higher jurisdiction such as the International criminal court to harshly deal with them.” A Nigerian born lecturer told this writer in Johannesburg after hearing the mass slaughter of six Ethiopian refugees in the restive and lawless Kwazulu Natal.

The killings took place just seven months after the South African government assured Africa and the world that xenophobic murders and lootings will never occur again.

Melese Arsedo, 27, was a very humble young man from Southern Ethiopia. His tearful friends told this reporter that locals shot him execution style after emptying his shop in broad daylight at a location called Pholoni, near the port city of Durban. Tafese Abebe, 23, suffered the same fate at the same area on 28-09-2015 when a crowed of Zulus went on the rampage. Speaking from shenshicho village in southern Ethiopia, A weeping Ato Berhanu, Tafese’s cousin said villagers were shocked and dismayed to see the shattered corpse of Tafese Abebe.

“It was clear that our boy was shot more than ten times…..please pass this question on his mother’s behalf to all South Africans. Why did you slaughter an innocent young man with such ISIS type brutality?” Ato Berhanu added. Tafese’s mother was too distraught to talk to us.

Bachore Bokore, 25, and Tarekegn Weyamo, 28, were also murdered in the month of November 2015 in Kwazulu Natal. That was followed by the execution of yet another Ethiopian refugee named Gizachew Abacho, 26, on 2nd November 2015. Survivors told this writer that Gizachew repeatedly called out for his mother before departing to meet his maker.

Comforting those who escaped the machete wilding Zulu gangs was an impossible task. Some looked like they were waiting for their turn to be executed inside a very tense location known as Enanda Ma-Thoboni, where young Ethiopian refugee Nuredin Adam suffered the most agonizing death at the hands of savage Zulu robbers on October 30, 2015.

The South Africans first loaded all the merchandise from Nuredin’s small shop onto a van before pouring petrol all over his body and set him on fire. He died on 5th November 2015 in hospital, surrounded by his terror smitten friends.

All corpuses are repatriated to Ethiopia for burial but no hope for those who survived the pogroms and remain stranded in foreign land. Dreams shattered and no country to go back to for as long as the minority junta continues to rule the impoverished Ethiopia with iron fist.

Bruised, battered and tortured souls forlorn of hope, trembling in fear of what tomorrow might bring to the land of Nelson Mandela and Oliver Tambo.