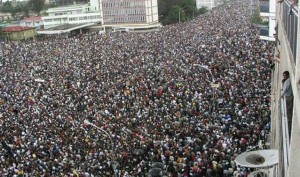 They say all kinds of bad stuff about us. It is said so many times and so often sometimes some of us start to believe the lie. That is always the problem with being lied to. I am sure by now Woyanes are drunk with their own silly propaganda. The situation with us is that they used to own the means of communication and we were their potted plants waiting to be told, lectured and abused to no end.

I have so many instances of this situation I just don’t know where to start. I believe 2005 is day one in recent Ethiopian history. From 1992 to 2005 were the golden years of Woyane where they could do nothing wrong. They could have declared black is white and no one would have challenged them. They held three elections before 2005 and trounced the so called opposition like a beach ball. The loyal opposition led by such luminaries as Dr. Beyene Petros were amenable in a fantastic manner and submitted without much fanfare.

It was the height of believing your own lie to hear the late dictator lament about the lack of a worthy opposition to challenge his TPLF mafia outfit. What is more our benefactor’s embassies were reporting that ‘there is no viable alternative to EPDRF.’ So our people lied low. You know how we operate. We flash that winning smile while in the back ground the brain is on overdrive to find a way out. That is what our people did in 2005.

In a closed door session with the foreigners Ato Meles was so sure of victory this is what he told them regarding his reason for allowing free discussion on his TV “That is why we were so generous in allocating airtime to the opposition. We wanted to give them a long enough rope for them to hang politically, by expressing their views in the ugliest form so that the people can see what they stand for…So as far as our rhetoric is concerned, we have said that they are the Interhamwe. Not because they will send the Tutsis back home, but the Tigrayans back home, normally on all fours.”

This is how much the TPLF was detached from reality. What did our people do? They annihilated the TPLF machine in every corner of our beautiful land. No worthy TPLF was left standing. Bereket Semon was knocked out, Aba Dulla was left for dead, Arkebe was humiliated and Meles Ashebari Zenawi was rendered mute. My best recollection is the letter to the editor to the Ethiopian Herald written by no other than the tyrant himself. Until today I believe that is the best insight into that murky criminal mind of the dear departed leader. I have a printed copy of that infamous letter hanging on my wall. In 2005 the Ethiopian people spoke loud and clear when given a chance. We proved them wrong in no uncertain ways.

Recently I read an editorial by the Ethiopian newspaper ‘The reporter’. Let me say first the Amharic version has a motto above the name and it says ‘Free press, Free thought and Free spirit.’  That motto is absent in the English version. I would think it would be easier to lie in a foreign language but I guess the Reporter thinks otherwise. They have no shame. Here is the title of the editorial ‘የኢትዮጵያ ሕዝብ ተቃዋሚዎችን እየታዘበ ነው’  According the ‘Fearless Reporter’ here in a nutshell is what the editor is preaching. The opposition claims the government is putting hurdles to keep them weak and the editorial 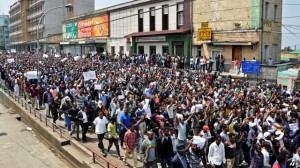 In the Reporters opinion ‘the opposition lacks resolve strength and good will and is not ready to sacrifice otherwise they would have been stronger.’  We believe the opposition is responsible for their weakness. The Reporter goes on to say plenty of nasty stuff about the opposition none of it worth repeating. The Reporter that practices what is called ‘yellow journalism’ and is the unofficial mouthpiece of the TPLF is one of those weapons that insistently peddles hate, fear, hopelessness and attempts to kill the spirit of Ethiopianism. I also believe the English version is written by someone with a second grade education.

Who else in his right mind would blame the victims that cannot even rent a meeting hall, that do not have a newspaper, that are denied airtime and cannot even raise funds to operate for being weak? The Ethiopian opposition has paid and is paying a heavy price for freedom. They have been hounded from their homes, fired from their jobs, their children denied schooling some murdered and the jails are full of our brave and resolute comrades in arms. You can see the shameless Reporter that does not even have an iota of honor and that lacks the moral capacity to pass any form of judgment on those that operate under a ruthless and criminal regime using precious paper to spread ignorance.

Despite what is being done to them, despite the power of the state that belittles their efforts 24/7 on national TV, Radio and rags like the Reporter the Ethiopian opposition is alive and well. There are ups and downs in this long journey. Today the torch of freedom is burning bright. We got a few choices that are steeled in the struggle and are raising the banner of hope. Semayawi Party is the new kid on the block. They are redefining the agenda. Despite the Reporters lamentations, the TPLF’s unending threats of dire consequences and the fear mongering by the old guard 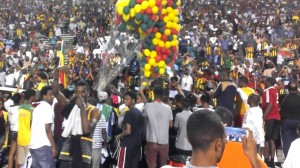 on June 2nd the Ethiopians came out in droves to support their party. The young and old, men and women, Christian and Moslem regardless of ethnic affiliation all showed under the banner of freedom and democracy. They said it was impossible, cannot be done but we proved them all wrong.

The recent ESFNA’s 30th. Celebration in Maryland is another occasion where we rose up to the challenge. They say we are one combative people. The rumor is we love to fight with each other, we don’t care to unite and we are always badmouthing our own people. They claim there is nothing on earth that will bring us together and we are one selfish people. It is supposed to be common knowledge that Abeshas are envious, uncooperative and hopeless. They say it and we repeat after them. After a certain time we reach a point where we start believing it ourselves. So we thought.

It is lucky for us that those that try to put us down and demoralize us start to be swayed by their own propaganda. Our clueless bandas believed their lies and organized a tournament to compete with ESFNA. They rented the best stadium there is, they bribed youngster from all over America with free ticket and free lodgings, they brought plane load of the nouveau rich from home and waited for the party to begin.  They really thought we would sell our soul for a fist full of dollars. They inadvertently gave us a stark choice. Money or country was on the table. The people spoke. You can always buy a few bandas like the Italians did but Ethiopia or death became the cry of the many. How many you asked? Over forty thousand and that was the capacity of the stadium. We might quarrel, we might have disagreements but when it comes to Ethiopia we are tight. How tight you ask? We don’t even allow a skinny Woyane to pass between us. We proved them wrong! Thank you ESFNA, thank you my brothers and sisters, I knew you will not let mother down. Prove them wrong is the battle cry. We shall overcome.