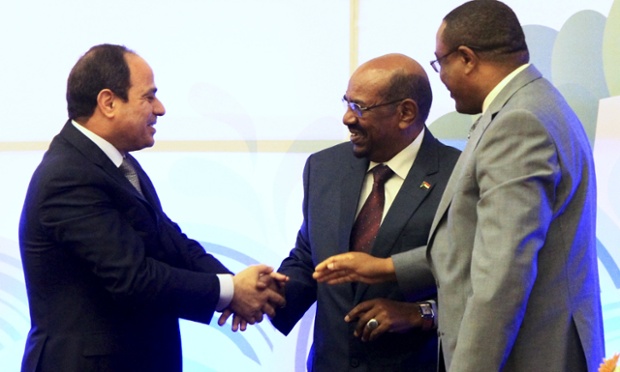 On March 23, 2015, Egypt, Ethiopia and the Sudan signed a declaration of principles on the Grand Ethiopian Renaissance Dam[2] (GERD). Since then, an intense debate has been going on regarding the modalities and core principles which were spelled out in the Declaration. Unfortunately, the principles contained in the Declaration have invited unhealthy rhetoric, particularly within Egypt, Ethiopia and among the Ethiopian diaspora. There are two fundamental reasons for the negative discourses. The first one involves the non-cooperative, zero-sum game strategic behavior that is inherent within the actions of the parties. Game theorists, political scientists and economists very well know that shared watercourses invite unilateral and self-interest maximizing actions- the well-known zero-sum positions being the dominant solution. Added to this is the emotive nature of the Nile River that was instigated and imposed upon the peoples of the region by colonialism. The second has to do with Egypt’s long-held historical ambitions to control the sources of Nile and colonial era position that is still reflected in the Declaration. On closer examination, we find that several of the current stipulations of the Declaration include many of the key elements of the 1929 and 1959 “Nile Water Agreements” that Ethiopia was not a part to. Consequently, the Declaration is framed not in a positive-sum game- “win-win” manner.

Cognizant of the fact that the construction of the Grand Renaissance Dam has become a game changer, with its strong potential to lead for cooperation, we attempted to show that Egypt’s policy towards Ethiopia has been unsustainable. We did so in our April 30, 2014 commentary. Even though we did not have the full and official Declaration in hand at the time of writing, we also attempted to raise awareness as well as our concerns using a short commentary that we disseminated on March 23, 2015. In particular, we called for (i) the translation of the actual Agreement into various Ethiopian languages; (ii) the revision of certain clauses; and (iii) as Egypt’s President was heading to address the Ethiopian Parliament and request for ratification, we called upon the Government of Ethiopia to defer this process to allow time and space for reflection. After the release of that commentary, Aiigaforum.com[3], a website that is close to the Government of Ethiopia, posted a document which purports to be the final and authentic version of the Agreement. Except for the location of the signing, and singular-plural uses of certain terms, see for example “resources” versus “resource” in the preamble and the sequence of the numbering of Principles III and IV of the Agreement, when compared to other versions available in the internet, the document appears to be authentic.[4] Though speculations are rife that the final agreement is still a secret, because of the importance of the matter, for this commentary we have used the version that was made available by Aigaforum.com.

Many have opined and welcomed the recent Egyptian diplomatic overture towards Africa, and its acceptance of the construction of the GERD, in particular. Even though the current tripartite Agreement seemed to have temporarily eased the recent tension among the parties, and despite some of the positive aspects of the Egyptian diplomatic overtures and its intent to cooperate as spelled out in the Declaration, we observe that the Agreement is unsustainable in its current form. In fact, our examination of the Declaration of principles leads to the conclusion that the clauses are designed to re-assert the 1929 and 1959 water sharing agreements and the much criticized Framework for General Co-operation Between the Arab Republic of Egypt and Ethiopia, July 1993, Cairo, Egypt[5] that was signed by the then Presidents of Egypt and Ethiopia. In this follow up commentary on GERD, we independently examine, in a non-technical manner, the elements of the tripartite Agreement which was signed in Khartoum on March 23, 2015. We do so by identifying omissions, sticky points and mistakes that need attention. Consistent with our April 30, 2014 commentary on this topic, we attempt to decouple political posturing within Ethiopia from the trans-boundary water issues that are facing the country. In doing so, we focus on the substantive issues so that the country avoids the repeat of the mistakes in the Algiers Agreement of 2000 between Eritrea and Ethiopia and the series of diplomatic maneuvering that created a landlocked country in 1993.[6] We decided to incorporate the clauses that are contained in the Declaration for the reader’s convenience.

II. Analysis of the Agreement

There are ten principles stated in the current Agreement. Below we provide comments for each element in the Agreement. For convenience, we juxtapose the Agreement (as published in www.aigaforum.com) in italics and our comments follow the article. Concluding remarks are provided in section III.

I. Principle of cooperation

The text states that the purpose of the project is to generate “sustainable and reliable clean energy supply”. There are no auxiliary purposes and can be interpreted to exclude, for example, the use of the waters for fishing, recreation, education and small scale industrial and irrigation projects around the dam. We do think that there are costs (risks) agreeing to this clause by the upstream country. There are no provisions for planting trees (timber, coffee, etc.), for example, to mitigate the erosion and evaporation, capture the carbon and/or put the soil into better use. This clause is, therefore, devoid of shared benefits and responsibilities.

IV. Principle of Not to Cause Significant Harm

As indicated above, this clause is taken from Article 7 of the 1997 UN Convention on the Law of the Non-navigational Uses of International Watercourses 1997- (effective as of April, 2014). The “obligation not to cause significant harm” is related to the age-old economic theory of externality which features in European trans-boundary waters and environmental agreements, in the form of the “polluter pays principle”. The UN Convention states that:-

(b) Where significant harm nevertheless is caused to another watercourse State, the States whose use causes such harm shall, in the absence of agreement to such use, take all appropriate measures, having due regard for the provisions of articles 5 and 6, in consultation with the affected State, to eliminate or mitigate such harm and, where appropriate, to discuss the question of compensation.”

Article #2 of the 1997 Convention defines the term “watercourse” as follows:-

It is interesting to note that the tripartite Agreement avoids the use of the term “watercourse” and hence excludes the ground water resources in Egypt and Sudan that recent geoscience studies are indicating.[10] Furthermore, it is important to note that the “international law” is selectively used here to strengthen the position of the initiator-originator of the current text.

V. Principle to Cooperate on the First Filling and Operation of the Dam

a) Agree on guidelines and rules on the first filling of GERD which shall cover all different scenarios, in parallel with the construction of GERD.

b) Agree on guidelines and rules for the annual operation of GERD, which the owner of the dam may adjust from time to time.

c) Inform the downstream countries of any unforeseen or urgent circumstances requiring adjustments in the operation of GERD.

d) To sustain cooperation and coordination on the annual operation of GERD with downstream reservoirs, the three countries, through the line ministries responsible for water, shall set up an appropriate coordination mechanism among them.

e) The time line for conducting the above mentioned process shall be 15 months from the inception of the two studies recommended by the IPoE.

VII. Principle of Exchange of Information and Data Egypt, Ethiopia, and Sudan shall provide data and information needed for the conduct of the TNC joint studies in good faith and in a timely manner.

This article is also fairly standard. It evolves from the UN 1990 Convention and that of the UN Charter. When this article is read together with Principle 1 of this tripartite Agreement, it brings back the 1997 Convention and the mediation, arbitration and determination role of the International Court of Justice. Ethiopia’s experience with arbitration has not been good and the Algiers Agreement and the ruling made by the Eritrea-Ethiopia Boundary Commission[14] are too fresh to be forgotten. Despite this fact, with lopsided clauses stacked against Ethiopia and in the absence of sound rules and principles governing the Nile water allocation and management, a “third party”, particularly in the context of the Nile Basin Cooperation Framework Agreement may lead to a better outcome.

In summary, when the recent tripartite Agreement on the GERD is compared with the 1993 bilateral agreement, though in many respects the spirits of the two agreements appear similar, there are also important differences. The current Agreement reaffirms Article 5 of the 1993 agreement which favored Egypt, includes terms about compensation for damages, restricts the scope of the dam project, recognizes “rights” to take action on the Blue/Main Nile, is sloppy on water utilization in downstream countries, and the non-exclusion of the tributaries from the Agreement cumulatively put Ethiopia at a disadvantage.

The obvious and fundamental question that arises in the minds of many observers is whether a reasonable government representative of an independent upstream country, irrespective of his/her political credo, would sign without duress, the tripartite Agreement in its present form. In light of the above analysis and consistent with our initial reaction of March 24, 2015, we reiterate our statement that no free nation should be subjected to be a party to such a lopsided and risky Agreement.

We also think the shared Nile waters represent opportunities for all riparian counties. However, the good fortunes emanating from the Nile could only be leveraged if all riparian countries are able to overcome the seemingly self-interest maximizing but counter-productive zero-sum game actions. The Nile Basin can facilitate the much needed African regional integration if all parties know how to share both the cost and benefit from this rich resource. Hence, the central point of departure for making bilateral, tripartite, quadripartite (as the case may be) agreements should be the Nile Basin Cooperative Framework Agreement, which includes all the riparian states and centers around the equitable sharing of the trans-boundary watercourses. Egypt must not be allowed to divide and maintain its supremacy by undermining the regional cooperation framework that is already in motion.

Hence, in the interest of equitable, fair, sustainable, comprehensive solution that guarantees shared benefits and responsibilities, we, therefore, call upon: