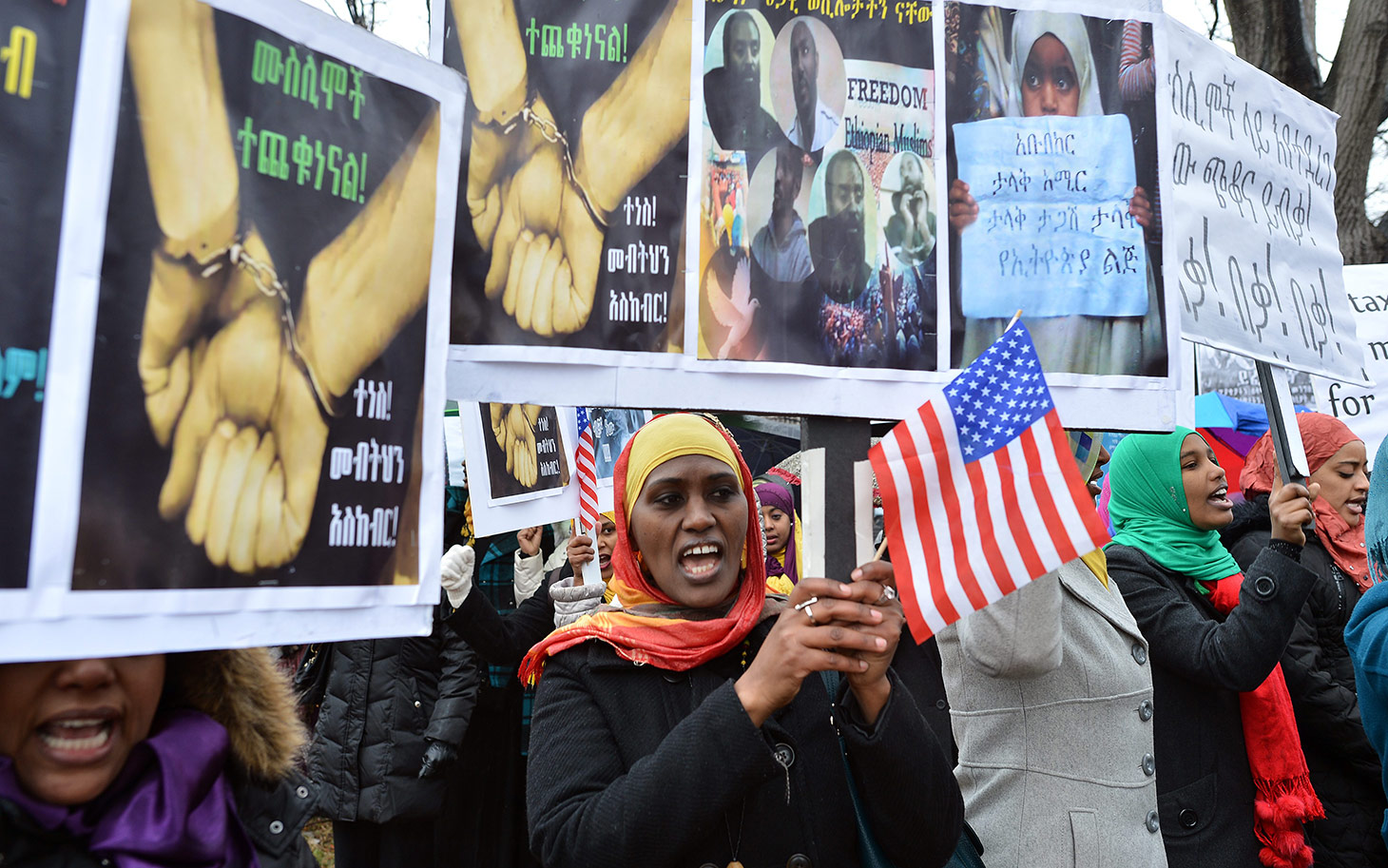 The Solidarity Movement for a New Ethiopia (SMNE) strongly condemns the recent verdict of the Ethiopian Federal High Court Fourth Criminal Bench concerning eighteen Ethiopians of Muslim faith who were found guilty on counts of attempted terrorism, conspiracy and incitement on July 6, 2015.

Those convicted include six members of the Ethiopian Muslims Arbitration Committee, eight scholars, two journalists, one artist and one student. They had been arrested in July 2012 related to their leadership roles in objecting to government interference in their internal religious affairs, in violation of Ethiopian law and the Constitution. This interference included at least three major complaints [see SMNE link]:

The Muslim arbitration committee was formed to attempt to peacefully resolve these grievances through negotiations with the current one-party regime of Ethiopia, the Ethiopian Peoples’ Revolutionary Democratic Front, (EPRDF), a coalition regime. However, the EPRDF is controlled by one of the four parties, the Tigrayan Peoples’ Liberation Front (TPLF) that is said to represent 6% of the population. In reality, the leaders in the TPLF Central Committee control nearly everything within country to their own political or financial advantage, from high level court cases such as this one, to the mundane.

This particular case is not new to us. The SMNE wrote several articles in the past three years concerning the intrusive and constitutionally illegal interference in the religious affairs of Ethiopian Muslims by the TPLF/EPRDF.

In July 2012, the SMNE posted an article condemning the TPLF/EPRDF attack on peaceful Muslims who were demonstrating against these intrusions in their affairs. Many were beaten, arrested and tortured. Civilians were killed, including a six-year-old girl. Arrests were even made of women bringing food to the prisons and force put on them to admit to criminal charges never committed. At the time, we also alerted the public to reports regarding TPLF/EPRDF plans to arrest Muslims, including these same leaders who are now charged. In a secret document, [Amharic] leaked to the SMNE in April of 2012, TPLF/EPRDF plans to incite extremism are revealed.

Religious leaders, political leaders, international donors, the African Union and others, including the Ethiopian public—whether Muslim or not—should condemn the recent [July 2012] TPLF/EPRDF attack on Muslims, who have been peacefully rallying for freedom from government interference in their internal religious affairs for over eight months. Now, word has leaked out from sources within the country, that the TPLF/ERPDF is planning massive arrests of Muslim activists and leaders, including members of the Independent Islamic Arbitration Committee, an elected group which has been leading the cry for religious independence. Allegedly, none of this will take place until African Union meetings end, later this week.

As one might notice, the timing of the hearing in 2012 was delayed until after the African Union met. It appears to again be calculated for a political reason. In the current case, the sentencing will not take place until August 4, after US President Barack Obama addresses the African Union in Addis Ababa and meets with TPLF/EPRDF leaders. Just like the regime’s efforts to “clean up the streets of beggars and street people”, moving them to a camp outside the city where the influx of foreigners attending the UN Finance and Development Summit this week or the African Union meeting at the end of the month will not see them; neither does the TPLF/EPRDF want any outsiders to witness the possible public outrage that may result from the sentencing.

On the other hand, last week’s convictions of these Muslim leaders for attempted terrorism, conspiracy and incitement, may serve as a well-timed political move on part of the TPLF/EPRDF meant to better market themselves as indispensable partners in the War on Terror. Sadly, the case is bogus; instead, the TPLF/EPRDF appears to exercise few moral constraints as they use any means to stay in power. This includes terrorizing many of the most noble and courageous citizens of Ethiopia, including members and leaders of other religious groups like the Ethiopian Orthodox Church, who have faced similar political interference in their religious affairs.

None of this is new, but is entrenched in the nature of the TPLF from the beginning. According to regime whistleblowers and a strategic plan distributed to EPRDF members in 1993, TPLF/EPRDF Strategies for Establishing its Hegemony & Perpetuating its Rule, political control of religious institutions has always been an important objective of this regime since coming into power in 1991. In other words, religious independence was seen as a threat to regime control from the onset. The struggle on the part of Muslims to maintain this constitutionally-given right for all Ethiopians, as well as other rights, put them in the crosshairs of the TPLF/ERPDF, along with other religious leaders, political activists, journalists, human rights defenders, editors and opposition leaders. Unfortunately, the people of Ethiopia are vulnerable to the whims of a regime willing to use the law as a flexible tool to their own advantage. This has made the legal process irrelevant to the guilt or innocence of those arrested, charged and convicted. Instead, the outcomes are always to the political advantage of the ruling party and routinely determined by those on the top of the TPLF.

For example, it is interesting that some political prisoners, journalists, bloggers and others, were released over the last two weeks without explanation; while others, like these Muslim leaders, were convicted. Those released, like Reeyot Alemu, had been in prison serving a fifteen-year sentence. Guards simply told her, without notice, explanation or any judicial process, to pack her things, call her family and leave. This is after serving four years in prison already. Others, like the five bloggers, were released in the same way after being in prison for over a year. They had been charged with inciting terrorism—a TPLF/EPRDF description within the anti-terrorism law equivalent to criticizing the regime.

When the judicial process is followed, it is often merely a drama, like in the recent court case of four young members of the Blue Party. After a court released them three times for the same case; police rearrested them each time, finally blaming “someone on top” for wanting the four jailed. It is further evidence of a thoroughly politicized legal process that carries no meaning and is as grounded as the wind.

On the other hand, despite the TPLF’s favoritism towards their own ethnic group, disloyalty to the TPLF is severely punished. A month ago, one of the leading Tigrayan opposition leaders was murdered, allegedly by party cadres. Others who opposed the TPLF/EPRDF have also been killed, arrested, charged, beaten and/or left to languish in prisons, jails and detention centers in Addis Ababa and throughout the county. Ethiopia’s anti-terrorism legislation has been repeatedly used in these cases to charge some of the strongest advocates for justice, rights and religious freedom with terrorism and incitement in an attempt to silence any opposition. It is no surprise that Ethiopia is the second largest jailer of political prisoners in Africa after Eritrea. 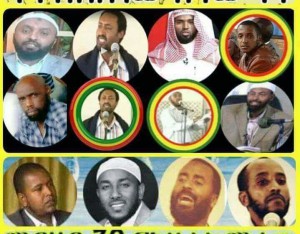 We anticipate that the TPLF/ERPDF will use the convictions of these Muslim religious leaders to lobby for more military aid for “fighting terrorism” based on this contrived case, perceiving it to be sellable to outsiders who do not know what is going on. Ethiopians of every religious background should be appalled at this verdict. This is an attack on religious freedom in Ethiopia, but it is also an attack on all who seek justice, democratic rights and equality. Donor countries like the US should demand the release of these unfairly targeted people as well as the release of countless other political prisoners being held unjustly. Targeting one group at a time is the way the TPLF/EPRDF has suppressed and divided sections of Ethiopian society since its inception—other religious leaders, the Amhara, the Oromo, the Afar, Ogadenis, the Anuak, the Mazenger and countless others.

This conviction of guilt is not a verdict on these religious leaders, but instead is a verdict against the hopes and dreams of all the justice-loving people of Ethiopia. They were put in jail for seeking only what was guaranteed by law—religious freedom. The TPLF/ERPDF cannot tolerate any criticism, accountability or any challenge to their interests. This can be clearly seen by the results of the May 2015 Ethiopian National Election where they claimed 100% of the parliament positions and nearly 100% of all local and regional government-elected offices. The British Ambassador to Ethiopia Mr. Greg Dorey summed it up by saying: “I think that is not good for democracy; that is what you get in places like North Korea”

Facing the international reaction to this embarrassing and obviously fraudulent result may be the reason for the release of the bloggers and Reeyot Alemu, in an effort to counter criticism and to change the focus to something positive in advance of President Obama’s visit. This is a country Wendy Sherman, the former US State Department diplomat called a democratic country and the Obama administration called an example of democracy. The TPLF/ERPDF’s own autocratic actions are making the analogy to being an example of democracy all the more outrageous.

In conclusion, the SMNE and others are not really surprised at the outcome of this case against these religious leaders. What else could result from a regime that: 1) claims such absurd electoral results, 2) which uses an anti-terrorism law to suppress political dissent, 3) which has created another law, the Charities and Societies Proclamation, that criminalizes the defense of the rights and protection of children, women, the disabled and those suffering from human rights abuses, and 4) which controls—by force, intimidation and corruption—every sector of Ethiopian society.

The SMNE will continue to struggle until justice prevails for all Ethiopians, for no one is free until all are free. This verdict is a verdict against all of us. We will continue to struggle until there is a system in Ethiopia where humanity comes before ethnicity, where the rights, dignity and well being of each human being is valued, and where the rule of law applies equally to all Ethiopians—not only to one ethnic group, one region or one political party.

We call on the rest of Ethiopians to stand up together because justice cannot be cherry-picked for one group at the whims of an unjust regime, but must be the right of all people. Until a more just and fair system is established throughout the country, this is a noble struggle for all our people.

May God help bring about the release of these Muslim leaders as well as political prisoners all over the country, lifting them up and encouraging them despite their circumstances. May our hearts and the hearts of the TPLF/EPRDF be softened so we all might see the humanity of others. May we be encouraged to stand up for what is just, right and true; remembering we are not here in this world only for ourselves, but to honor our Creator and to contribute to the lives of others.