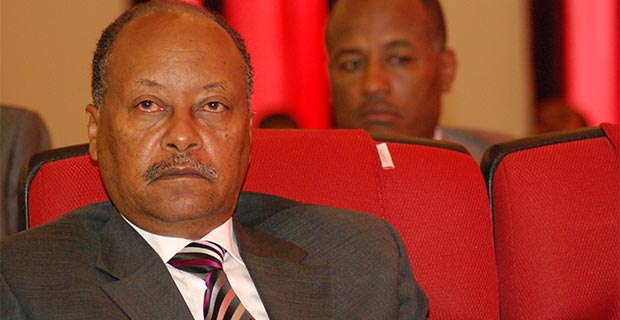 In todays’ Ethiopia the word Abay has become a source of worry for a few and brings despair and anger to the many. We have two Abays that are in the news and they are both causing us internal and external problems. Abay the river አባይ ወንዝ is as victim as the rest of Ethiopia. Poor Abay of Egypt and the great pyramids, the longest river in the world and a name that evokes greatness and pride among Ethiopians is reduced to becoming a prop for Woyane ponzi scheme.

I am referring to his Excellency Ato Abay Tsehaye currently Policy Study and Research Advisor Minister of the Federal Democratic Republic of Ethiopia Office of the Prime Minister in other words the real power behind the throne. This is the Abay that has been creating havoc in our country for the last forty years. He fought the Derg but for all the wrong reasons and he has been proving that since TPLF took power.

Abay Tsehaye is the founding member of TPLF and is a long time Head of the Political Committee of the infamous organization. It did not take long for Meles to usurp power make a puppet out of Seyoum Mesfin and Abay Tsehaye. They acted as loyal solders to make Meles’ dream come true no matter how vile. It must have been the many years of built up resentment that made Abay take side with the losing Seye group during the internal upheaval of the mafia organization. It did not take long for Abay to switch. True to form Abay was one of the first to knell down and ask for forgiveness and swear allegiance to Il Duce. Meles must have been delighted to have his toy back on a shorter leash. Abay has been a model servant ever since.

He was assigned the Federal Affairs Job including the police, Addis Abeba plus baby-sitting all Kilil leaders. Abay was also what was known as the Sugar Minister. It is empowered with such authority that Abay fired all three hundred workers of Wonji Sugar without notice. He is that crazy and void of empathy. Abay is also the mastermind behind the insane idea of farming on Holy Waldeba Monastery Land. Waldeba is one of the holiest places in our country and instead of preserving and protecting our national treasure this TPLF Cadre decided to hire an Italian outfit to bulldoze Waldeba and grow sugar.

His Federal Affairs Ministerial rank is what gave Abay the real power today. During Meles time he was doing what the boss wished and his really dark side was under control. Today Abay is freelancing. He considers himself as the last guard to carry the torch of destroying Ethiopia from within. I believe one can say he was among equals in the TPLF Politburo until about a month ago. I am not sure about that today.

Meles and Abay raised all Kilil heads some from infancy. Kuma, Aba Dulla, Teferra and Addisu occupy a special place in their heart. They are family. Kuma and Aba Dulla both were peasant solders in the Derg Army and were taken prisoner by the Eritreans who handed them over to TPLF. At that time TPLF was becoming a force and has already mastered running prisons by condemning its own members. The TPLF designed a way to use the prisoners as messengers of TPLF ideology of ethnicity and obedience to a greater force. They were programmed to obey. Abay was assigned their boss and he made sure they stayed on message. Abay is elusive like a shadow doing everything from the background and is considered not merciful and is equipped with a sharp tongue like Il Duce.

Since the death of Meles Abay has been flaunting his new power. Of course he has the backing of Sebhat Nega another dinosaur brimming with hate and fear. The Oromo uprising is costing Abay dearly. He is being shown to be an emperor with no clothes. Losing OPDO that is the biggest and juiciest prize in TPLF basket is causing him lose legitimacy. Are the rumblings from the Amharas Kilil harbinger of things to come is what his friends are thinking? Does the Taxi drivers’ victory in Hosaena another crack in the system? How much should the rest of the Politburo stick with him and what becomes of stripped down Abay? Can he be used as an escape goat? They must have said to him ‘well Abay, the ball is on your court.’

Abay did not wait to find out further cracks in his fake armor. He went on the offensive. The media he chose to redeem himself is itself a riddle inside a mystery. He gave his interview to Horn Affairs a Party (TPLF) sanctioned outfit with a presence on Facebook and nothing of redeeming value other than making random childlike noise. He could have gone to ETV or EBC but he wanted to give this new upstart a leg up and strip it of any legitimacy to the ethics of journalism and conducting interviews.

Daniel Berhane the TPLF Blogger was given the honor of channeling Abay. He was being interviewed to set the record straight and restore his name and honor. What was he denying is a good question? Right around Christmas the Oromo Media Network (OMN) received a secretly recorded media of a meeting Abay Tsehaye attended with the group he is shepherding. The audio recording is clear and Abay Tsehaye’s voice, manner of speech and choice of words is hard to miss. He said some harsh words to the assembled ‘officials’ at that meeting. He threatened them and drew a line in the sand. It is not a pretty picture.

OMN shared this wonderful expose with the Ethiopian public. The issue he was stressing on was the famous ‘Master Plan’ to take land from the tillers. The Oromo people had already expressed their misgivings about the plan. The local people were becoming hip to TPLF’s plan of displacing them and making them part of the urban poor. The hidden ‘voice recording’ showed the people their government is a sham and OPDO was nothing but a foot solder to TPLF thugs. It is nothing new but hearing it like that makes one cringe with shame and boil with anger. To listen to the six million ordering and humiliating the thirty four million is always a little discomforting. The heroic stand by our young Oromo activists is what is why we are speaking of #OromoProtest and Abay’s role in this criminal act.

The interview with Abay by Blogger Daniel serves two purposes. He is deflecting attention from the TPLF while warning all collaborators the kind of defense his group will use if necessary. The video interview is a gem. We see this old and senile cadre squirming to make himself look reasonable and honest. He whispers and does not dare look straight into the camera or the interviewer because he knows his face betrays his heart. He sits side ways to hide his discomfort and the soft lighting makes him look weak shallow.

Needless to say he denied everything that was heard on the recording but he used the same words and sentence structure to deny it. That is how stupid Abay is. He asked where is the video? Really Abay, what do you think the idea of recording you in secret is about? I doubt you would rant like that on TV. Instead of saying that is not my voice, I did not say that Abay decided to argue about the location where it was recorded. Lord have mercy upon us for we are being tested.

The second message was to HMD and the remaining puppets regarding their role in this criminal enterprise. Here in America it would be appropriate to say ‘Abay threw OPDO under the bus.’ It is said when one sacrifices others to escape punishment or blame. Abay threw Kuma, Keder, Aba Dula and others under a moving bus regarding the Oromo land grab fiasco. It also means the puppets are responsible for the hundreds of people killed and thousands in prison. It is their Kilil and their business and the Constitution supports him of that assertion. Never mind the idea originated from TPLF and OPDO just implemented the directive but you see TPLF did not leave any fingerprint behind.

Abay is the true incarnation of Meles. In this situation of great significance where citizens have been killed, young ones are being imprisoned and families are being put in a very stressful situation Abay is just thinking of himself and no one else. Not his comrades, not his people and certainly not his country. A statesman would have come out to calm the situation get everybody to settle down and start a period of healing and finding the cause. That is not the TPLF style. He was willing to set the Oromo people against OPDO his own creation until he could find another solution. It is the usual band-aid approach. The veil is coming down.

It is another wake up call to the other Kilil officials that survive by the good will of Woyane. The Amhara, Southern Nations, Afar, Ogaden, Gambela are being given a warning if they are paying attention. Abay, Sebhat, Debretsion, Getachew and others are not there to protect you or share the crime. You are grown up boys read the writing on the wall and save yourself is what Abay is telling you.

The rest of us we stay the course. Woyane is being bankrupted everyday and they would run out of money to sustain their criminal enterprise. They cannot print money since the inflation that exists now has already made life unbearable for our people. The Diaspora has to cooperate in denying foreign currency and sharpen the boycott to help our people have a fighting chance. Let us act as concerned as the European Union that is forcing the mafia regime to stop and think. Do not let them laugh at our lack of spine and empathy.