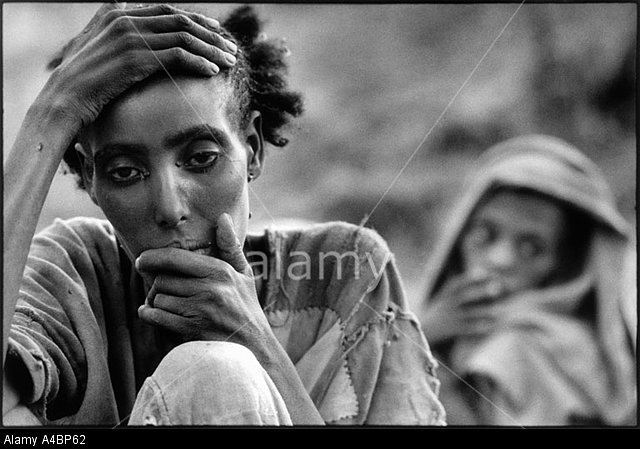 Famine is back in Ethiopia. Famine and Ethiopia have become so interchangeable western comedians don’t feel shame making famine jokes using us as a punch line. How is our first 21st Century famine being welcomed in our precious homeland? I am afraid our response has not changed. Denial, surprise, blame and righteous indignation have been brought out of the closet. The response by the Emperor, the Junta and the ethnically challenged mafia group are typical Ethiopian. ‘Shit happens but this time around it is not as bad as before so give us credit please!’

Ethiopians as whole are not talking about the famine yet. A few thousands dying is not something that worries an Ethiopian. Death due to hunger, death from curable disease, death due to internal displacement (Get out of my kilil philosophy), death on the way to South Africa, death from being set on fire in South Africa, death in Yemen, death in the Sinai, death in Libya, death by hanging in Beirut, Abu Dhabi, death for ‘security reason’ at home – death has lost its meaning in Ethiopia. That is exactly why we have developed this habit of assigning a very low value on the life of a human being. That is the reason the government is debating the number of people starving as if thousands is understandable whereas if one mentions millions it is considered a ‘terrorist act’.

It is left to foreign reporters and the UN to come up with the numbers. ‘8.2 million people in need of emergency support, with the crisis set to worsen through September next year, according to the UN’. Is what Mr. William Davidson of Bloomberg Business told us in one of his dispatches from Nairobi. Of course for outsiders it is all about numbers and economic and political interest as it should be. The popular excuse being echoed is about ‘lack of rain’ not about the lack of accountable government that has the foresight to store food for bad times while growing the agriculture output to feed the exploding population. I am afraid that requires a government of the people that would put the citizens welfare first and foremost. TPLF spends half its time plotting against enemies real and imaginary.

There is something that makes the current famine a little different than the previous ones we encountered. This famine is taking place in one area where we assumed it would never happen again. We assumed that because the last twenty years we were told the Tigrai Kilil or region is where favoritism was played at the expense of all others. This is supposed to be the Kilil where the ruling TPLF Woyane would shine without interference from some like you know who that has been stifling the aspirations of the Tigrai people for so long is how it was presented to the rest of us haters and terrorists.

We are aware that since the fall of the Derg all key and important positions are held by those from Kilil Number one as represented by Woyane Party (ሕዝባዊ ወያነ ሓርነት ትግራይ) We Ethiopians know the so called EPDRF is a front to hide the real power behind the throne. Woyane as a party was purported to be representing the dreams and aspirations of the Tigrai people.

Woyane said Kilil Number One should get the lion’s share of the budget because it suffered under the Emperor and the Derg and made it so. We are aware of EFFORT the biggest conglomerate in East Africa involved in manufacturing, distribution, Insurance, import export, construction and agriculture. There is no one in Ethiopia that can compete with EFFORT. We are told EFFORT belongs to the people of Tigrai. The question then is why is famine rearing its head in Tigrai and where did all the money that pored into the Kilil from the National Budget and the Tigrai Diaspora go to?

There is only one answer that comes to mind. The self claimed Woyane Clique in power has never ever represented the dreams and aspirations of the people of Tigrai. Woyane is not capable of such responsibility. They never cared for the poor Tigrean and no one can accuse them of loving the rest of us.

The dreams and aspirations of the Tigrai people are no different than that of their other Ethiopian cousins. It is very simple. If the people of Tigrai loved and coddled Woyane it is a sure bet the rest of us Ethiopians would warmly welcome them. The truth of the matter is the Woyane clique is not welcome in Tigrai. Mekele is an armed camp whenever they hold their Maoist flavored Congresses.

It is time people question the validity of TPLF’s claim to represent the interest of the people of Tigrai. For the rest of us Ethiopians it is further proof that those in places of authority do not have the capacity to administer a single region let alone a Country. The TPLF machine has not only failed the people of Tigrai, it has failed all Ethiopians.

This irresponsible policy of using ones people to hide behind is ugly and beneath the proud people of Tigrai that have always felt the brunt of the many problems our nation have faced. Tigrai is the gateway to the rest of Ethiopia. The Italians have invaded us twice and Tigrai was the battleground. Ethiopian opposition groups like EDU, EPRP and TPLF have used Tigrai to assemble and organize. It is here where TPLF goaded the Military Junta to bomb a market place for its own political end. It is in Tigrai Woyane fought Eritrea and sacrificed over eighty thousand Ethiopians. The people of Tigrai have always stood with the rest of Ethiopia. The rest of Ethiopia has always been there to protect the land and freedom of the people of Tigrai.

It is only a year ago Woyane TPLF celebrated the 40th anniversary of the birth of this cancerous organization. They squandered over 2Billion Ethiopian Birr to transport so called artists, pave the streets, paint the houses and dress their cadres to show us their miracle in Tigrai. At this ‘historical’ moment we were told the Tigrai Kilil was able to harvest 75 million quintals from irrigated land and 38 million quintals even in winter weather from the vast area under cultivation. None of it is true. It was all lies. As usual it was a made up Woyane statistics. It is just like the double-digit growth that when one digs deeper it is nothing but a meaningless blabber meticulously drawn by some shady accountant.

The clique has every reason to lie and cheat. That is how they came to power. Constantly demonizing others they don’t agree with and eliminating opposition forces by any means necessary is their Trade Mark. They are naturally born killers. Their own friends that survived have given us a window into their dark savage past. They still practice that by having their own Woyane TPLF prison cells all over the country. They have a very sick mind.

The Aiga Forums, Tigrai on Line, The Reporter and Awramba Times among others are cheerleading not because they are not aware of the gangster organizations crimes but it is out of ‘ethnic loyalty’ and complicity. Their ethnic group on the outside feels no shame in using the Embassies all over the world for fund raising and ethnic celebrations. They practice ethnic apartheid even in exile.

The children that are supposed to know better, that have the training to look at the larger picture failed to use their education to protect the interest of their own family. Instead of building on the Ethiopia their ancestors fought for, they participated in a not well thought out experiment to use hate as a philosophy to divide and rule.

This famine is another opportunity for all Ethiopians to come together and question the wisdom of allowing a clique purporting to represent an ethnic group inflict such suffering on all of us. Many thousands died in the seventies and that was blamed on the Emperor. Thousands more died during the Derg period but both the Military Junta and TPLF made money or used the people as commodity to trade power politics with.

Today Tigrai the ‘Crown Jewel’ of the ruling Party that we are told is a showcase of Development and Good Governance is the epicenter of famine just like in the old days. Our Afar Region and our Somali citizens are already victims of the famine. Woyane TPLF is the common thread among all the Kilils. TPLF Policy is causing harm to Ethiopians.

There was a time when higher education opened the eyes of Ethiopians and galvanized high school and college students to stand on the side of poor Ethiopians and raise such important issues as ‘land to the tiller.’ Ethiopians stood as one not representative of an ethnic group. TPLF redefined the question. Well over twenty years later we now know that kind solution is not the way to go. It has only brought more misery and there does not seem to be light at the end of this tunnel.

What is a little baffling to the rest of us is how some among us are forging ahead the same ‘ethnic’ route somehow hoping to arrive at a different conclusion. Changing the name from Tigrai to Oromo is not going to really change the outcome of this bankrupt way of thinking. There are plenty of our Tigrai citizens that were duped by the distorted history as told by TPLF and they are paying the price with their life. They believed the lie as told by their ‘educated’ children. We see now it is wrong, sick and criminal. We are hoping our Oromo brothers observe and adjust their political program and reflect the true wishes of their people. It is time the ‘ethnic card’ is retired from our political discourse.