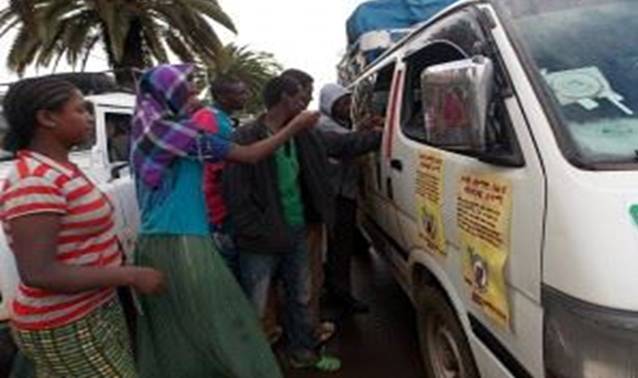 Drunk with ethnocentric tyranny, the Ethiopian ruling minority junta under the leadership of Prime Minister Hailemariam Desalegn is continuing its crack down on opposition groups with devastating cruelty and mercilessness.

Currently, the inept and abusive regime and its cadres are focusing on the opposition party UDJP’s nationwide campaign for change under the banner of “millions of voices for change.”

According to Finotenetsanet weekly Amharic tabloid, as part of the naked assault on freedom of association, UDJP Addis Ababa zone executive committee member Nebiyou Bazezew Wubalem, 42, and colleague Messay Teke were severely assaulted and robbed by more than sixteen TPLF cadres in the town of Fiche; about 45 km north of the capital while on campaign to mobilize the local youth for Saturday 25 August 2013 peaceful march.

The injured duo have arrived in Addis Ababa this morning, 22 August for further medical attention and UDJP acted swiftly and decisively by sending another strong team to the town of Fiche.

“Nebioyu Bazezew Woubalem became a target before even going to the town of Fiche after his recent interview with you guys (the free media in exile). I spoke to him today at 12 o’clock and despite the ordeal he is in good spirit and raring to go. His injuries are not life threatening but he was in critical condition earlier. We all hope and pray that he will be back to work soon.” A close friend of the brutally mauled UDJP stalwart Ato Nebiyou Bazezew who requested anonymity told the Horn Times from Addis Ababa. (Photo: UDJP tour bus mobbed by its diehard supporters in Fiche by minilik Salsawi)