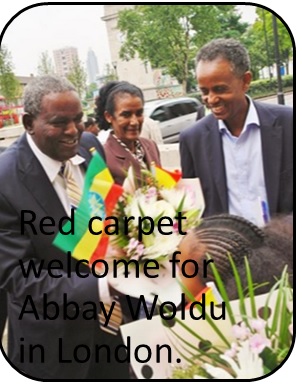 Created by the dead enclave hero Meles Zenawi and officially known as the regional state of Tigray, state within a state and the birthplace of the current ruling party in Ethiopia, Tigre People Liberation Front/TPLF; Tigray republic is holding its glittering annual Tigray Development Association/TDA functions around the world with tyrannized and indigent Ethiopian taxpayers footing the huge bill.

After a week long music and dance spectacle in various US cities, where scrumptious meals and champagne were made available with gay abandon, TDA delegation led by the belligerent and the most feared TPLF warlord, Tigray republic president Abbay Woldu(pictured), arrived here in London for Saturday’s (24 August 2013 similar extravaganza) on Friday night.

After lavish welcoming ceremony and stopover at TPLF flag- adorned Ethiopian Embassy in London, the warlord headed to one of London’s expensive five star hotels in Mayfair’s Stratton Street with his massive Tigre entourage.

In addition, the Horn Times learned that as it was in the US last week, meetings and musical and cultural celebrations were only for the republic’s citizenry. Agendas and resolutions were top guarded secrets. No journalists from the exiled free press were allowed near the TDA festivals and paying Tigre members had to produce special barcoded TDA IDs to secure entrance.

Hence, it appeared difficult to verify the widespread rumor that if warlord Abbay Woldu indeed threatened Ethiopian Muslims and the opposition UDJ party with all-out military assault similar to the 2005 onslaught.

“Am sorry. I cannot go to a segregated ethnocentric celebration of a minority group. This is a sign of sheer madness and backwardness by TPLF warlords. We paid a huge price to overthrow the communist regime of Mengistu to see a better Ethiopia. Am an academic from Tigray. I supported Woyyane anticipating a united, democratic, and prosperous Ethiopia. Instead, look at what we are getting. A crazy warlord coming to London in the 21st century to chair a meeting of his clan. What a shame.” A college professor based in the UK told the Horn Times asking us not to publish his name for security reasons.

“It is time for the people of Tigray to rise up and say to the warlords ‘NOT IN MY NAME’. When Meles Zenawi was still alive, we repeatedly raised the issue of putting Tigray first in every aspect should not be allowed to develop in to some sort of naked ethnic apartheid. That is what we see today. While Other Ethiopian resource- rich provinces struggle to hold their annual meetings at home how do resource- poor Tigray afford to stage multi-million dollar events in New York, Paris, and London? Moreover, if they have nothing to hide why exclude non-Tigre Ethiopians from attending the gathering? This does not auger well for the coming generations of Tigray. TPLF is ostracizing the people of Tigray.” The heavily bearded academic with pure British accent added.

Describing the TDA extravaganza held in Washington Dc and London repulsive, irresponsible, and shameful, another Tigray born medical practitioner who distanced himself from the profane clannish celebration said thieving TPLF warlords do not have both the wisdom and sensitivity to rule Ethiopia.

“As distance from the sea continues to hamper development, Ethiopia remains the second poorest nation in Africa after Niger. Millions go to bed hungry and a third world epidemic known as polio is spreading like wild fire. Shortage of hard currency is also making life unbearable in the land locked nation of 80-million. So tell me, what is there to celebrate? Ethiopians are in desperate need of a regime change. It is time for the outdated junta to leave.

“We have to strongly condemn wild clannish celebrations such as this and the Tigray martyrs day fiesta for the sake of our children. Moreover, I believe the equal distribution of wealth is the hallmark of 21st century democracy. Beating drums to celebrate the emphatic economic successes of one region at the expense of the other regions is very dangerous. It is a clear sign of terrible misrule. I don’t know where we are heading to…,” the London based medical practitioner told the Horn Times. We withhold his name  for security reasons.

To balance the report, the Horn Times then contacted the office of the president of the regional state of Tigray based in Mekele, Ethiopia as to find out  who funded warlord Abbay Woldu’s trip to the US and Europe. However, a certain Giday Solomon arrogantly refused to comment warning the Horn Times that referring to his boss as warlord is an insult to the dignity of the entire TPLF leadership.

“We don’t know what you are talking about. Man up and ask the honorable Tegadelti (Abbay Woldu) himself. Am sure he will give you a sweet answer.” A woman who refused to give her name sarcastically replied and declined to take further questions from “the diaspora media.”