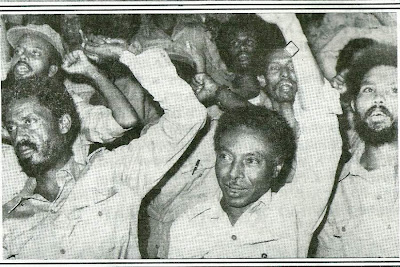 Amnesty International, Human Rights Watch,concerned US politicians like Rep. Chris Smith, Rep. Mike Coffman, Ethiopian activists and others who care about human rights in Ethiopia have been exposing tortures, killings and massacres committed by the TPLF (Tigrayan People’s Liberation Front) regime for more than twenty-five years. Most of these crimes are still being committed against many Ethiopians for their political views and ethnicities. Former prisoners, like Habtamu Ayalew, who were lucky enough to survive, have told us of unimaginable human suffering in TPLF prisons. A brave girl named Nigist Yirga and other have told us they are being tortured because of what ethnic group they are a part of.

TPLF cadres have defecated and urinated on Ethiopians in captivity, making the TPLF regime one of the worst human rights violators in history.Unfortunately, there were so many Ethiopians who never survived the inhumane torture practices of the TPLF at Maekelawi, Kilinto and other places including secret prisons in Tigray. If Maekelawi is to be converted to a museum, it should certainly include the stories and pictures of thousands of Ethiopians who were tortured and killed by the TPLF regime. The museum should certainly have to play a recorded interview of Habtamu Ayalew and others who are survivors of TPLF savagery.

The puppet prime minister has put all the blame regarding Maekelawi on the Derg Regime. While the Derg has done a lot of despicable crimes on Ethiopians it is also a fact that Hailemariam Desalegn and Meles Zenawi took torture to the highest level of inhumanity. Listening to the prime minister’s denial of his regime’s crimes,it seems fair to ask if the religious, caring and family loving Hailemariam Desalegn could have survived the following done to him by TPLF cadres every day for months.

If any of these horrible crimes were committed against the prime minister, he would probably have admitted the inhumane practices of his government.

Right now, the regime should not only release all political prisoners without preconditions, but it should also face the following: complete and independent investigations on torture in all its prisons, including torture by ethnicity, killings and rape in its prisons, the identity and number of prisoners tortured as well as the number of prisoners killed during torture and the TPLF leadership members who approved such inhumane torture techniques. Furthermore, all torturer, killer cadres, police men and their superiors including top TPLF leadership should be persecuted by an independent court.

Note: All investigations should be part of the suggested Maekelawi museum.

In addition, the regime should face independent investigations for the killings of peaceful demonstrators in Addis Ababa, Ambo, Kobel (Abay Mado), Dembi Dolo and other cities, including the killings of more than eight hundred Irreecha celebrators. They should also face such investigations for massacring and inciting violence and intentional displacement of Anuak, Somali, Oromo and Amhara brother and sisters in various regions of the country.

The TPLF is shamelessly trying to persuade Ethiopians that it could convert itself to a democratic government. However, the TPLF is a cruel, extremely corrupt, inhumane and ethnocentric mafia organization that must be removed for Ethiopians to establish a meaningful and sustainable democracy. Thus far, the regime in Addis Ababa has been imprisoning Ethiopians using a terrorism law that is completely designed to suppress descent and Ethiopians know very well the fact that the healing process will never start until terrorist TPLF along with its puppet prime minster who has no shame in telling Ethiopians there is a multi-party system are removed from power. Ethiopians should have aright to elect a government who works for them instead of spying, defecating and urinating on them.

We call upon the United Nations, Amnesty International, Human rights Watch, the US congress, the US senate, European Union and other Champions of Human Rights to demand for an immediate and independent investigation of the Ethiopian Regime for crimes against Humanity.

Human rights are rights inherent to all human beings