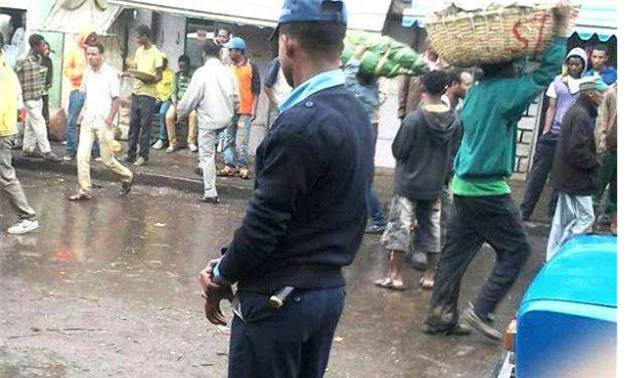 According to eye witnesses whom the Horn Times spoke to, this pictured police officer first picked the two harmless bombs but a colleague shouted at him to place them back under an Isuzu van reg. number, code 3-73189.

And there began the live show of shame after ETV cameras and TPLF journalists rushed to the scene along with anti-terror squad members and federal police bomb disposal unit members.

Amid laughter and mockery by hundreds of onlookers at one of Addis Ababa’s busiest terminals known as American Gibi, near Ras Seyoum hotel, on Wednesday morning 22 August 2013, two police bomb disposal unit members crawled to the “dangerous explosives” and removed them while a camera man film their every move from very close range. However, the drama did not end there.

As the ETV camera zoomed, four police officers dragged a well-dressed and bearded young man who looks like a traditional Ethiopian Muslim from a nearby grain store and pulled out two detonators out of his hip pocket before horridly driving off the way they came. It was mission accomplished-planting evidence to persecute the innocent; in this case the Ethiopian Muslims.

Some already labeled the drama a strategic deception by the ruling minority junta to secure conviction by planting evidence that will lead to wrongful incarceration, torture, or even extrajudicial execution.

“It is ridiculous. How could police remove bombs with hundreds of people standing less than two meters away and ETV cinematographers filming the whole episode from less than a meter away? In addition, what kind of stupid terrorist is placing hand grenades without detonators under a car only to be caught with them moments later? I think everything is stage managed.” A shop owner who watched the whole drama from his balcony told the Horn Times reporters.

A well-known legal expert who chooses to remain anonymous said planting evidence has become part of the junta’s plan to stifle the opposition after the 2005 mass uprising against the minority rule.

“Police and intelligence officers who are employed by the Tigre People Liberation Front/TPLF cannot comply with the requirements of oaths and perform their jobs in an honorable and honest manner due to their ties to the regime.

“Under pressure from their superiors; officers plant evidence instead of gathering and analyzing evidence. Since they are hired to serve the ruling party, they think every opposition politician deserves to be incarcerated whether or not the suspects committed the particular crime in question.

“In my more than fifteen years of practice, I have seen dozens of wrongful convictions of respected opposition figures and journalists due to police planted evidence. Few days ago the Ethiopian government seized bombs at the airport and today another two bombs tomorrow a weapons cache…all these will be used in the ongoing propaganda war against Ethiopian Muslims.” He explained warning that opposition politicians, journalists, and religious leaders will never get fair trial in a police state like Ethiopia. (Photo: It was business as usual for the people while police removes “dangerous explosives” in Addis Ababa on 22 August 2013 – minilik Salsawi)