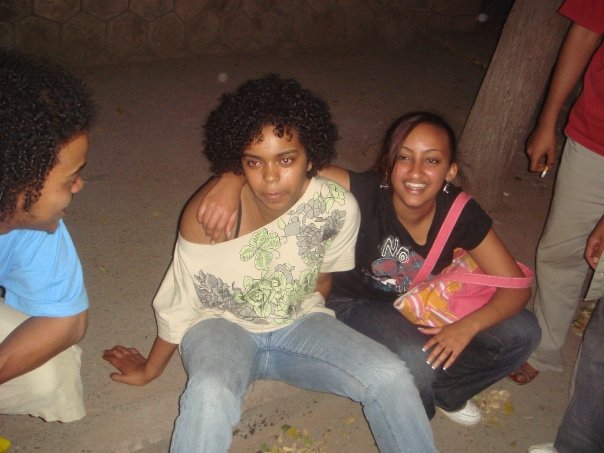 This was how the dead tyrant L.Zenawi raised ‘his’ daughter.

Semehal Meles Zenawi not only grew up attentively listening to her ‘ father’s’ anti-Amharic and anti-Ethiopia marathon speeches, but also watched him killing thousands of Amharas  and internally displacing millions of Ethiopians with unexplained hate and  barbaric cruelty.

Rumored to have been fathered by current foreign affairs minister Tedros Adhanom, the deposed princess is now taking her frustration out on her own pale and snappish mother and their 23 year old battered maid named Debrework.

Since smocked out of the grand palace and took shelter in a less glamorous mansion owned by Tigre warlord Seyoum Mesfin, her daughter’s witless drunkenness and passionate intolerance to any non- Tigre Ethiopian has been driving Azeb Mesfin crazy,   the main bone of contention being Semehal’s extravagant  spending spree with her Cocaine sniffing Nigerian boy friend. Her wastefulness worries her filthy-rich mum otherwise known as the mother of corruption.

Although the sorrow smitten Semehal has been given enough time to grief for her ‘father’, according to reports, she has sunken deeper into despair and failed to snap out of it.

Times of sending expensive gifts to Chelsea Clinton and dancing with Susan Rice are gone. The luxury black Jeep-Cherokee once she used as her own is now transporting PM Hailemariam Deselegn’s children. Currently, instead of seven smart body guards only one “stinking gnome” is following her around. All these changes are difficult to come to terms with.

The tomboy girl, who once looked vibrant and purposeful, according to TPLF insiders with links to The Horn Times, is now a wreck, the instigator of disobedience and a wild party animal.

Those in the know said the late Fuehrer Meles Zenawi is to blame for not teaching the spoiled princess how to earn honest wages instead of making cash stolen from the people of Ethiopia available to her, a bad practice inimical to work ethic. He never thought one day his genocidal kingdom would come to an end.

“We made a mistake by mixing with the Amharas, you killed my father.” Semehal often says to her Amhara mother Azeb Mesfin every time she gets home drunk and high on drugs.

“How she wish all non Tigres had one neck just to sever it with one lethal swing of the sword to avenge her father’s death. Semehal Meles Zenawi is verging on madness. If the name of Abebe Gelaw comes up in conversation she completely loses her temper and groans like a possessed person.” A family friend who cannot be named for security reasons told the Horn Times. Our source further said if the girl continue to misuse her money at this rate, the cash stashed away in offshore accounts will soon dry up.

Then the verbal fight between the haughty former first lady Azeb and the hedonist Semehal spills over to include their Amhara maid identified by Minilik Salsawi BlogSpot as 23 year old Debreworke.

The young girl who suffered both physical and psychological abuse by the extremely rigid Semehal has since moved from Demarite to neighboring country after making a daring escape from the mansion where she was held like a slave girl for more than a year.

The Horn Times tried for weeks to get her on the phone, but to no avail.

However, once she feels safe and protected Debreworke will reveal it all, according to our sources.

(Photo: provided by the writer)