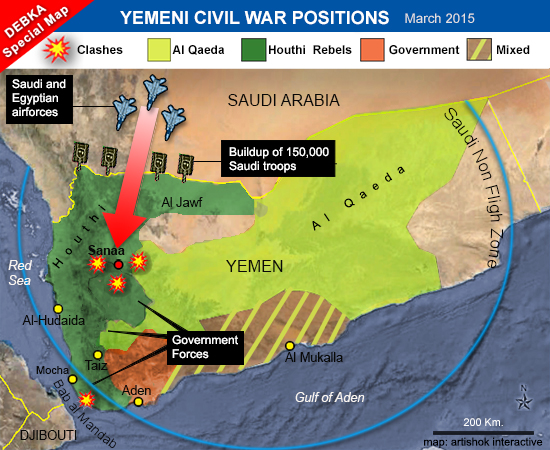 Poor Yemen is fast becoming the new playground of every wanabe strong Arab regime in the Middle East. Yemen is a safe location where they could test their acquired toys and pretend to act like a real army fighting real battles.

Yemen never have it good. It was not blessed with oil, the only commodity that sustains the Arab monarchs’. Yemen came out from the womb staggering and never seem to have acquired this thing called stability, freedom and democracy.

It is said long time ago the Axumite Kingdom stretched across the Red Sea into Yemen. Today both our countries are unstable, poverty stricken and just keep jumping from one crisis to another. In our case ethnic conflict is what fuels the fire while in Yemen religion is the preferred accelerant.

Yemen’s recent downward path to implosion started during the Arab Spring two years back. Before that Ali Saleh the warlord pretending to be President was comfortable playing one group against the other, cozying up to the US and Saudi Arabia and even befriending Iran on the sly. Then Arab Spring came and the boat was rocked and the gravy train was derailed.

The Gulf Arab negotiated the settlement and if you remember Saleh was exiled to Ethiopia. Woyane was willing to accommodate another warlord with plenty of looted money. If the price is right Woyane would throw the door open even to the Devil himself. Saleh was a non-issue.

Saleh did not like the humiliating way he was dispatched from office. He did not like it one bit. He sat and waited. The Houthi were the perfect vehicle to hitch a ride back to power. The fact that they are allied to Iran the arch enemy of Saudi Arabia did not bother Saleh one bit.

His Vice President that replaced him when he was booted out never saw one day of peace. Last week the old VP the new Pres. was unceremoniously driven out of the Palace in the capital city to Aden the port by the sea. He was pursued by both by the Houthi and his own army under the command of Saleh. Today it is reported he has landed in Riyadh, Saudi Arabia with his tail between his legs. We Ethiopians are familiar with that.

Well for Yemen it looks like the trouble just started. It is going to be a long violent summer in Yemen. My brain overheats by just looking at the lethal weapon aimed at poor little Yemen where the peasants like ours live day to day and spend most of their time trying to conquer nature not each other.

I will start with the ring leader Saudi Arabia. They already have a name for the campaign ‘Operation Decisive Storm.’ That is so American. Sorry ‘Desert Storm’ was taken by Bush so ‘Decisive’ it is! The Saudis are not an easy enemy. It is not because they are brave in battle, that they have fought a war and won, have a long history of organized military culture-no sir the reasons is none of the above. I am afraid of them because they have these lethal weapons that they have bought from all weapon vendors on earth except the communists.

Of course they do not have real life experience using those sophisticated weapon system nor have they met any organized force making the exercise a little dangerous. But any weapon system you name it they have it. The desert is full of sophisticated planes, tanks, radar systems money can buy. The key issue is does having it translate into knowing how to use it effectively.

‘Saudi Arabia deployed 100 fighter jets and 150,000 troops for the operation, according to the Saudi-owned news channel al-Arabiya. The UAE also contributed 30 fighter jets, Kuwait and Bahrain 15 each, Qatar 10 and Jordan six’ the Guardian reported.

Egypt would supply the foot soldiers and enter from the Red Sea and by land from Saudi Arabia. They will face three main enemies. 1) Yemeni people. 2) Houthi militia. 3) Al-Qaida. The Yemenis are fighting on their own land. They are familiar with the desert. They are not the kind that would submit easy. In the short run they will suffer heavy loses. But they are patient people. Time is on their side. Which side Saleh would ally with is a good question. The old fox must be working both sides. The US is very familiar with Saleh’s Army.

The big war is fought between Saudi Arabia and Iran. The Saudis seem to be on the defensive lately. They are not sad Saddam and Gadhafi are gone. But none of their investments have paid off. Bashir Al Assad is still standing a little stronger today than yesterday and the best have been thrown at him. The Iranians have solders in Iraq and have encircled Tikrit as we speak. The US is negotiating with the Ayatollah’s what else can go wrong?

All those planes assembled are going to fly and drop their bombs over Yemeni targets. There is no such thing as smart bomb or targeted strike. That only happens on books. The poor people of Yemen are going to be hit by a force they did not even imagine in their dreams. No one will count how many died. They will give estimates. The world will see numbers to give the story realism and it is old news.

It is possible the Saudis bit more than they could chew. The Iranians would be more than happy to bloody their nose. Can the Saudi withstand such blow cannot be answered today. The family have not been tested like this. All this uncertainty in the region is not good for our struggle for democracy. Dictators love chaos. They use the turmoil to do their dirty job under the radar.

I worry about Yemen because there are many thousands of Ethiopians stranded there. They left their home to make something of their life and now they are in a situation that no one even pays attention to their plight. They must be terrified. Most governments will send or lease a ship to save their citizens. Most people will stress about the fate of their people. The Ethiopians in Yemen are invisible. What would become of my children is what our country should ask.

Do you have a picture of Sana’a Yemen? Savor it. It would soon resemble Aleppo Syria, Mosul Iraq, Tripoli Libya or Mogadishu Somalia. All of them were beautiful places once upon a time where people went to work, raised a family and sat in a sidewalk café on the wide boulevards to drink cappuccino.

All the places mentioned above have one common thread running through their story. Dictatorship by one or a few is what precipitated all this melt down. A government without accountability to the people does not end well and when it goes it leaves a mess behind.

People in those places do not remember how the fighting started. If they know why now they do not care anymore. Their life has been turned upside down and lost meaning.

Our country Ethiopia is a candidate for such melt down. The ethnic animosity fanned by the ruling party, the coming economic contraction that is inevitable is going to polarize society more than ever. Today they say one can cut the tension with a knife. It is that thick. Saddam did not see it coming, Gadhafi was super relaxed. They are both dead and their people are still paying the price. Dictatorship does not end well. God help the Yemenis.