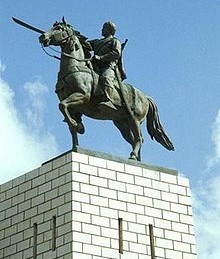 Recently the Somali Regional government installed a statue in the middle of Jijiga town (the regional capital). This statue is for the 19th century “Somali patriot” who fought with all forces within the Horn of Africa. Historical books and literatures are full of the ideal he had waged battles and wars. In this short article I would like to consider whether he was an Ethiopian and deserve a multi-million dollar statue in the centre of the regional capital. And examine the legacy this man will send to our next generation. Ethiopia is championing a democratic state in which nation/nationalities live in equality, fraternity and brotherhood. The symbolic representation of this man hardly reflects these ideal.

Before we engage with these question let us see the historical background to the emergency and rise of Sayyid Mohamed Abdillahi Hassan. Sayyid Muhammad Abdullah Hassan (born 1856, Somalia, died 1920, Ogaden) was Somalia’s religious and nationalist leader (called the ‘Mad Mullah’ by the British). For 20 years he led armed resistance against British, Italian, and Ethiopian colonialist forces in Somalia.

He was born and brought up in the current Somaliland from his ogaden father and Dhulbahante Mother around the Talex area. As all local children he went to the local quranic school and studied Islamic religion. He was the eldest son of Sheikh Abdille, a religious Ogaden Somali. Hassan’s hero was his maternal grandfather, Sade Mogan, who was a great warrior chief. In addition to being a good horseman, by 11, Hassan had learned the entire Qur’an by heart. In 1875, he worked as a Qur’anic teacher. He then devoted 10 years to visiting centres of Islamic learning in Somalia and Sudan. He then travelled to Saudi Arabia and to perform his Hajj Pilgrimage. It was during his visit to Mecca and Medina he met with a religious fanatic known as Muhamud Saleh, the founder of Salihiyya order.

He was a religious zealot indoctrinated in religious fanaticism, just like the current al- shababa leader, Ahmed Godane, Mukhtar al zubed. Initially he mobilised Somali clans’ men for his doctrine of war against infidels and non-believer and waged war against both British and Ethiopian forces in the Horn of Africa. When the Somali clans were disillusioned with the motive of his fighting, they started to abandon him in bulk. To enforce obedience, he used some cruel form of punishment against anyone who opposed him. It was at this time that he relied a lot on his clans men. At the end of his life, he was much more a clan leader who simply waged war against anyone. As a result, he attacked many Somali clans both in Somaliland and Puntland and Somali regional state and after he simply resorted to looting and pillaging ordinary people and killed.

A turning point in his history was when he killed the Suldan of Dhulbahante Somali clan who lend him a lot of support during his campaign of hatred among Somali. His Islamic teaching in Berbera, current Somaliland port, had not gone well with the local population who already used to follow a moderate Islamic sect. As the result, the fanatic leader became isolated and irrelevant for the cause of Somali people in the Horn of Africa. A tribal raid under Somalis armed by the British killed the remaining Dervish but failed to catch Hassan. Along with some followers, he escaped to Arsi Oromo in Ethiopia where he tried to stabilize his position. In 1920, Hassan died of influenza at the age of 64. 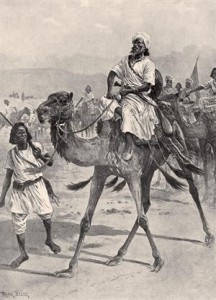 Mohamed Abdillahi Hassan known as the ‘mad Mullah’ by the British was a fanatic religious leader who simply resorted to common criminality to advance his objectives. There is a striking similarity between him and the current Somali regional state, Abdi Mohamed Omar. The latter formed the Liyu police forces just as the fanatic religious leader did more than hundred years ago. He enlisted his own tribes’ men. Initially he attacked his own ogadeni clan to get the green light from his EPRDF/TPLF masters in Harar and Addis Ababa. Then he waged war in to the Somali clans in the regional state. It is an open secret that the liyu police forces also carried out operation beyond current Ethiopian border just like what the Mad Mullah used to do.

There are many Ethiopian Somali who fought for Ethiopia in the long past immediate recent. We are baffled by the decision of the Somali regional government to put a statue in the middle of the Jijiga town of this fanatic. The most surprising thing is Ethiopian’s so called federal government tacit acceptance of somebody who plundered and bloody the people’s nose as a hero. While the people of Somali regional state are suffering in much form of man-made calamities, it is a beggar belief to build substantial statue at the cost of tax payers.

Taking into account all these, then the question everyone asking is what the purpose of erecting a statue in Jijiga town for a person who preached hatred, religious, cultural and clan intolerance among Somali people and wider Ethiopia. It is also putting a torn in wound to inaugurate this statue on the day of nation/nationalities by Ethiopian Prime Minister, Haile Mariam Desalagn . What message this is sending to next generation.

Personally I don’t have any grudge against this man and his ideal. I might be judging a person sitting in period and time that completely different from his time. However, it is completely a mockery of Somali culture and an insult to the nation/ nationality and clan and tribe democracy the current Ethiopian government want to advance. The next generation of the country will get the opportunity of reading the historical fact written about this man in many books and literatures. They will get opportunity to read his poems in which contain his venomous hate toward other religious sect, Christianity, clan and nation/nationalities. Moreover, this man’s policy at the beginning was based on “greater Somalia” idea. When he failed, he turned to his close affinity with his clansmen by persuasion, sometime by force. He led expeditions against many Somali clans who opposed his indoctrination.