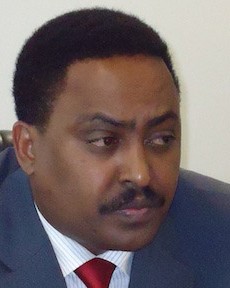 Since he ordered kids following their parents to anti-government rallies to be shot and killed, millions in Ethiopia regard him as a very insane man endowed with evil powers to maim and murder the innocent and the defenseless.

Just looking in to his merciless gaze with blank cruelty of a cannibalized warlord sends shivers down the spine of his enemies. Since his master Meles Zenawi died Federal police boss Workneh Gebeyhu has been in sullen and vituperous mood; raging against any opposition to the TPLF.  The most feared and hated man in Ethiopia, never seen smiling or talking without angrily raising his fist and punching the air, TPLF warlords see him as an ideal replacement for the self-exiled gun and sex crimes maestro, Bisrat Amare of Columbus Ohio in the US.

The iron lady of murky Tigre politics, former first lady Azeb Mesfin still adores Workneh for his ability to defend the TPLF hierarchy and for the role he played in protecting her late husband Meles Zenawi for more than two decades.

He is dangerous, extremely unpredictable and erratic with tremendous charisma to terrorize the people.

Besides the federal police, Workneh commanders various mobile death squads including the all-Tigre elite Trojan horses known as the Agazit; and it were the Agazit from their head quarters at Bella military referral hospital who invaded the streets of Addis Ababa and murdered hundreds of protesters in 2005.

According to an eye witness account obtained by the Horn Times, Dr Brihanu Metaferia, a well known gynecologist and head of the military hospital in 2005 who defected to the US in 2008, provided temporary accommodation for TPLF inner circles in the hospital’s compound from where they launched a genocidal offensive against unarmed civilians.

Even Kids and teens were not spared during the massacre and more than 30 of them were identified days later at various government mortuaries in Addis Ababa.

Commander Workneh Gebeyhu, the man who allegedly gave the order for the senseless carnage to be carried out, is yet to admit or deny the charges labeled against him by the opposition and grieving parents.