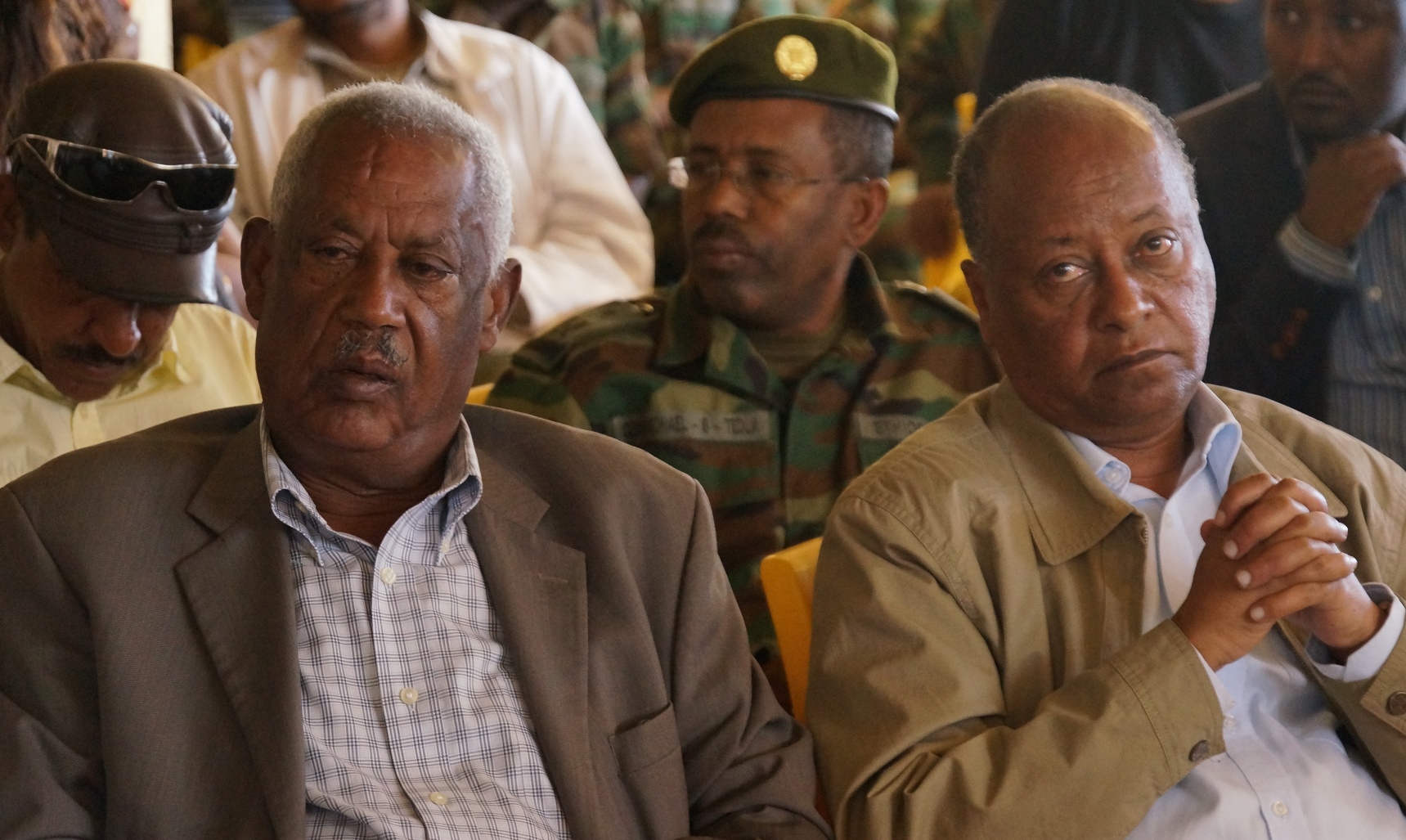 This time it looks like we have found the formula to start building a harmonious Ethiopia. The Tigrai Woyane Liberation Front that refused to grow up is on retreat mode. The Forces arrayed against the gangster organization are now speaking in one voice. Will TPLF elite wave the white flag without further bloodshed is in everyone’s mind.

The question is not easy to answer. From experience, the most corrupt and ethnic based regimes come out bloodied if lucky; but mostly end up in prison or dead. It took the ethnic organization fourteen years (1991-2005) to find out the system they were building is not acceptable to most Ethiopians. They were surprised to see how much despised they were. That left them eleven years to loot and burn. It is another milestone in their shameless history to see them face another fork in the road – compromise or Full speed ahead to a head on crash.

They have missed two opportunities, would the third be the one that is their wake up call or would it end up being the cause of their demise? In 1992 they were presented a golden opportunity to usher a period of peace and prosperity. Our people were tired of wars, the few surviving children were ready to start building a new Ethiopia. Woyane squandered that when they introduced the Kilil system and tried to make being ethnic cool – how retrograde can you get?

2005 was the second missed opportunity to compromise and move on to better things. In actuality 2005 changed the whole picture. It became us against them in Woyane mind. That is what they are ripping today. Their dream come true but it is turning into a nightmare.

Our people are both patient but ingenious at the same time. So today all over Ethiopia they are engaged in a decisive battle against their common enemy. They have used stones and sticks against guns. They have piled boulders to deny access to Woyane troops. There are reports of Woyane Buses and Woyane owned warehouse on fire. So the battle continues.

Then the people of Gondar added another chapter to our book. It was a brilliant idea, surgical in its nature and professional in its execution. The Gold Medal goes to Gondar, Ethiopia. For three days they stopped all physical, spiritual and earthly dealings with the cancer called Woyane. I envy the people of Gondar that risked  doses of Chemotherapy from the rays programed to zap and destroy Woyane infected cells.

The people of Gondar are trying to send a message to our Woyane warlords but those in power are playing deaf. Thirty years on the saddle changes people. They are so coksure of themselves. Why not, they got a large army, they got their own Agazi Force, (Army inside an Army) and Security in every village, what can go wrong?

They mastered the stick but are unable to deliver the carrot.

There are times when military might does not determine positive outcome. Our friend Assad had the most disciplined and well trained Army, robust Security built over thirty years of rule. He is the closest despot we have that can be compared to Woyane. Like our guys he is from a minority tribe. The Assad’s belong to the Alawite tribe. The Alawi are Arabic speaking ethno-religious community. According to Daniel Pipes writing in The Middle Eastern Studies  ‘Alawis were the weakest, poorest, most rural, most despised, and most backward people of Syria. In recent years, however, they have transformed themselves into the ruling elite of Damascus. Today, Alawis dominate the government, hold key military positions, enjoy a disproportionate share of the educational resources, and are becoming wealthy.”

So the Sidama were supposedly crushed, the Anuaks were driven away, the Somalis were declared Islamists, the Amharas were hounded inside their own country while the Oromos were subjected to losing dignity and their land. With Gondar in turmoil the circle is complete. The victims are holding hands. Woyane propaganda has been notched up to reflect both to show empathy to what has been done to us and also to warn us to what is to follow without Woyane in the center. Who said Woyane don’t have balls. Balls they got, brains is what Woyane lacks.

In Ethiopia Media is reserved to the golden tribe. No one bothers with their trash talk. It is a different story outside. We have hundreds of flowers blooming. The marketplace of ideas decide who wins and who needs to work harder. You know what is sad is to see them submit articles, analysis on our independent media. I don’t mind it at all but the shameful act is noted. What lack of accountability does is allow individuals like Mimi Sebhatu spread their vile philosophy on innocent people. Some Woyane are coming forward to help repair what they broke. Of course it is always EPRDF never TPLF Woyane.

Woyane has also got a very fertile imagination. Their head heavy with the crimes they have committed the last forty years and all they think about is of the Old Testament that allows ‘an eye for an eye.’ We have moved on. We are inclined to favor the verse ‘Do unto others as you would have them do to unto you’.  I hope that will ease their worry. Anyway what I notice in our discussion today is their adherence to ‘peaceful transition’ of course under Woyane tutelage and good will. They are always compelled to stress the importance of the current Constitution which of course we are free to change later but right now we follow the Woyane authorized Constitution and let them go free with the loot!

The fact the current discussion is ‘when does the house of cards begin to crumble’ means things are not the same in good old Ethiopia. Change is coming. The system is under tremendous stress. It was never constructed to last for long. It has served its purpose to the Tigrai minority and their underlings. Now it is in disarray. If this epic battle was happening in the West it would be considered the height of ‘peaceful resistance.’ The different smart tactics our people are employing would be a sure headline on the New York Times.

You know what – it is the most talked about subject among all Ethiopians. We have been admiring the tenacity of the people of Oromia for quite a while now. The people of Gondar have taken the question of unity, equality and freedom to a higher level. They have managed to shut Woyanes filthy mouth once and for all. The people at home are devising different ways to sap the will of the Mafia regime.Their Diaspora kinfolk are working hard to expose the ruthless ethnic based regime to the whole world. Here in the US people are calling and writing their Congress Reps. to remind them of the struggle of our people for equality. Have you called yet?

There is no denying we have our share of ‘Uncle Tom’s’ amongst us. They betray their people for thirty pieces of silver. Those that stand with the illegal regime do their dirty work behind the curtain. They are always slithering like the snake they are and walk with their head down to avoid looking at our eyes. How they explain their betrayal to their family and friends is always a puzzle to me.

How to go about helping the struggle of our people is in every ones mind. One does not have to be an Ethiopian to stand for freedom. It is a Human issue. It is only fair that we raise the subject with our new friends and ask them to help our people. So it is only natural that country and people loving Ethiopians voluntarily disassociate themselves from Woyane spiritually, physically and financially. It worked wonders for the people of Gondar. They showed the Dictators they are united and willing to pay the price for Freedom. They also acted as a beacon of freedom to all Ethiopians. That the Diaspora can do, can Ethiopia count on you?  It is not a great sacrifice and it is within everyone’s grasp to do the right thing and help avoid bloodshed in our homeland.

So what exactly is within our grasp. Do not Fly Ethiopian Airlines. Do not consume imported beer, spices, teff, and other products from Ethiopia. Do not get involved in the ponzi scheme called “Hedasse Dam” any buy Bonds. Do not go to Ethiopia and if you do avoid Woyane affiliated establishments. Stand with our people with their demands for the rule of law and Democracy now! Those that ignore the call to avoid Woyane are of course on the wrong side of history. No amount of justification will absolve one of standing with the killers of our people for temporary gain. The Banda badge will be the legacy of associating with Tigrai Woyane.

As for the feeble tale Woyane is trying to tell us today about the rest of Ethiopians ganging up against Tigrai people, well there could not be anything far from the truth. In fact given the chance the people of Tigrai will be the first to rise up against the mafia group. There is no one in Ethiopia more familiar with the gangsters like the Tigrai that have been suffering Woyane rage for forty years. Ethiopians are noble people and have shown ethnicity is not their cup of coffee. Meles tried that trick in 2005 no use trying to revive a bankrupt policy. Happy Sunday Woyane dog, stay home!