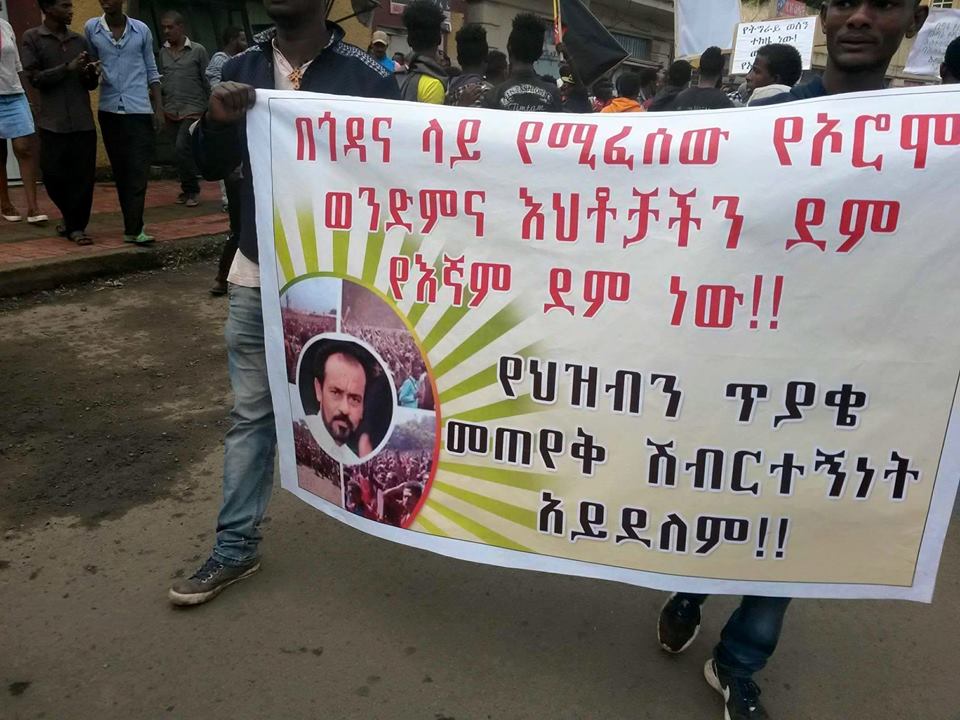 This is the summer the Ethiopian people declared ‘I’ve had it up to here’ and rebelled against Woyane rule. A few things ignited the rage that has now engulfed the whole country. The Addis Ababa Master plan designed to confiscate land though being in the planning stage for a while did not go do well with the poor farmers. It was Abbay Tsehaye’s turn to prove his worth and he failed miserably. TPLF embarked on its killing orgy to quiet the noise. Over a thousand lives, tens of thousands youth in camps and untold property damage the repression did not achieved the intended result.

The issue of Wolkait-Tsegede reared its head at this unfortunate time. Unfortunate for the Tigrai based cabal. Of course Wolkait-Tsegede question became an Amhara issue. It is also true folks began to connect the dots. Before you know it Gondar defied the regime came out waving the real Ethiopian flag and picture of Bekele Gerba the unassuming Oromo leader. Slogans shouted ‘Oromo blood is Amhara blood’. Needless to say TPLF was in disarray.

The customary Erecha festival was the time when things took an ominous turn to the mafia group. Busloads of Amhara elders from Gondar, Bahir Dar and Northern Shoa came to Bishoftu to celebrate with their Oromo cousins. The elders sat down under one tent and affirmed their kinship. That was the straw that broke Woyane back. Their information and propaganda Minister had a meltdown on national TV. The Amhara and the Oromo cannot come together he declared with confidence. The TPLF playbook does not contain instructions on how to deal with the rest of Ethiopians getting together without the Tigrai group lurking in the middle.

Thus they even raised the deadbeat from happy retirement to come and defend ‘Revolutionary Democracy’. Seyoum Mesfin preached in his usual flat monotone manner with theories from centuries back and void of the truth. He managed to put us all to sleep. Abbay Tsehaye in his own bland way tried to paint a good picture, Berket the ill fitting child neither Eritrean or Ethiopian tried to show presence but nothing worked. First round saw Kassu Ilala and Aba Dulla in the mix with Ledetu brought out last in this circus show. None of the above act got traction. The defiance in both Amhara and Oromo regions intensified.

Ethiopians both at home and those dispersed all over the world felt empowered when they saw our Oromo and Amhara cousins standing together. The minority ethnic based regime was feeling the heat. No amount of propaganda was changing the perceptions of a regime cornered. True to nature the Politburo declared State of Emergency and created a parallel government. ‘Command Post’ is in charge of the country and no one knows who under what authority choose three people from the same party to make a life and death decision about our family. Command Post is another name of TPLF Politburo.

The Decree was typical TPLF senseless bravado. Drawn by school children its full reach came trickling by. Even when it was read on National TV the Decree was backdated a day early. The kangaroo Parliament was not even consulted. Well after the fact they collected MP’s from their Teg Bet and made them vote. What was interesting is the fact some from Oromia and Amhara regions stood up and refused to vote on the illegal proclamation. We commend their efforts, all is not lost. As you read this our country is ruled by the TPLF Politburo with not even a hint of shame. Whether you like it or not TPLF have taken over the country. Holding on to that power is an existential question for a few people. As I said the balance was tipping against the mafia and they had to do that to rule another day.

What gives a person a pause is the news about the meeting in London by International Oromo Lawyers Association.  I am glad our Oromo people got together to exchange experiences and get to know each other. The Oromo region of the country has become a killing field and it is natural those that escape the atrocity will get together to help their family and speak out loud to remind the world. Ethiopians inside the country are facing Agazi murderers on a daily basis and their children in the outside are gathering, marching, collecting signatures and keeping hope alive.

I am afraid the London Conference was not designed to find a solution, expose the dire conditions at home and publicly shame the dictatorial regime. No that was not the purpose of this assembly. For some strange reason the organizers including Ato Teshale Aberra a former Chief Justice of Oromia region under the tutelage of TPLF and Ato Jowar Mohamed a social activist and Oromo Network official among other notables decided to use such an empowering conference to throw dirt on their own old Nation. I know it is mind-boggling but that is the route they decided to take at this important time in our history.

Their claim was to give a forum to all that are concerned about Oromia and the future. Normally in such conferences the organizers invite individuals or organized groups to tell the assembled their vision on how things are going to be like when they are made in charge. They usually bring out folks that after careful study and long practice give guidance to their people and help put matters in perspective for the average person to digest. It is considered futile and a waste of valuable time to dwell in the past when the people are clamoring for smart way of doing stuff to get out of a dangerous and deadly situation. One cannot normally go to the length of allocating time and money to waste it on trivia and ‘Mamo Kilo’ story.

They actually gave the microphone to an individual that threatened to dismantle our country so he can build a free Oromo Nation. I agree it is a bizarre notion but he actually said that and those in attendance clapped cheerfully. An individual that has the title PhD in front of his name was happy to say ‘our job is not to act as pillar (ምሰሶ) to hold Ethiopia together. I believe and recognize the right of both gentlemen to express their feelings or wishes whichever way they like. That is not what I am concerned about. What I find strange is why the organizers thought inviting people with such vile and unattainable position would attract others to the cause of freedom and justice.

Both gentlemen and their friends seem to have forgotten they currently reside inside Ethiopia. How they will continue on their Nation building process while everything around them is in disarray is not clear at the moment. Other than espousing some tired ideas about ‘independence’ our honorable friends have not worked out the nuts and bolts of National dissolution or Nation building. Believe me it is not an easy matter. Ask our ancestors.

Some use history as a club to knock down others instead of using history to learn from and build a better future. They go hundreds of years back and argue with passion as if it happened right here in front of our eye. It is when they want to settle score today that they bring out what happened a long time ago. The fact they are becoming what they hated in others does not seem to strike them as a little strange. In Ethiopia this sort of mentality has become a national culture. The Derg swore to get rid of inequality but turned out to be a killing machine. TPLF Woyane came with much fanfare as the savior of the Nation but is now fighting for its life while threatening to hightail it back to Tigrai and leave us fighting each other. So much for ‘I love Ethiopia.’

Looks like our Oromo organizer of the London conference have not heard of what happens when you catch the tiger by the tail. They are trying to duplicate a broken system that is on the verge of collapse. Why Oromo supremacy would work when the Tigrai version failed is a mystery. Today our people are in the process of forming a United Front. Why some fail to see this as a positive sign of maturity and a sure formula to guarantee a lasting peace is a very perplexing matter. One is forced to look deeper and try to determine if TPLF has infiltrated some of the groups. It is worrisome to see all the ugliness of the conference being used by TPLF outlets and Woyane Social Media activists to disparage and put down our movement for freedom.

There is another conference scheduled in Atlanta in a few days time. Would it turn out to be another hate fest and ‘pie in the sky’ storytelling gathering or approach the problem our people are facing in an adult manner and use the opportunity to give hope to our people. It is our collective wish that the organizers rise up above the sloganeering and cheap theatrics that attract the unhinged among us and embark on the road of building one Ethiopian Nation that holds its children in a loving, equal and compassionate manner. We urge you not turn our summer of upheaval into the winter of our discontent. No doubt you will lose but that does not mean there will be winners.

We wish our Oromo people gathering a huge success. Our people are paying a heavy price and this is no time to rain on their parade. This is not time to add to the sadness but a time to give hope. This is not the time to selfishly try to shine the light on oneself but a time to unite together and confront the mafia regime as one. We have them staggering and all we got to do is push them gingerly so their fall does not affect us much. The question is are you going to push or give a shoulder to lean on, you decide my friends, we already have. We are pushing.