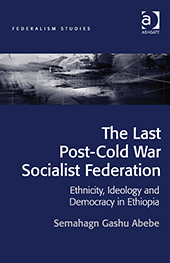 This book assesses the Ethiopian ethnic federal system from the perspective of the principles of socialist federations and other Marxist oriented policies pursued by the ruling Ethiopian Peoples’ Revolutionary Democratic Front (EPRDF). Exploring how the application of these ideological principles has impacted on the structure and function of the Ethiopian federal system, the research examines the ways in which these ideological policies of the ruling party affect national consensus, protection of human rights, the rights of minority groups, separation of power principles and the relationship between the federal and regional governments. It also explores the extent to which ideological principles have had an impact on the democratization process, rule of law and in building up institutions such as parliamentary democracy, the judiciary, the media and civil society organizations in the country. Approaching the Ethiopian federal system from the perspective of the fundamental ideological principles of the party in power allows a deeper insight into the structure and function of the ethnic federal system.

Contents: Introduction; Federalism and the accommodation of diversity; Socialist federations and the accommodation of diversity; Introduction to Ethiopian constitution and history; Development of ideological radicalism and ethno-regional movements in Ethiopia; The fundamental ideological principles governing ethnic federalism in Ethiopia; The principle of the right to self-determination in the Ethiopian ethnic federal system and its implications; The implications of party ideology in the structure and function of Ethiopia’s ethnic federal system; The role of party ideology in the democratisation and protection of human rights in Ethiopia; Concluding remarks; Bibliography; Index.

About the Author: Dr. Semahagn Gashu Abebe is a Research Scholar at the Institute of Human Rights, University of Connecticut, USA. He has widely published on federalism, constitutional law and human rights in the context of sub-Saharan Africa.

Reviews: ‘A splendid analysis of the ideological principles of the TPLF/EPRDF that govern Ethiopia’s ethnic federalism. Semahagn lucidly explains the Marxist-inspired concepts of self-determination of nationalities, democratic centralism, revolutionary democracy, the development state model, and the party evaluation mechanism that are so facilely used to justify the FDRE Government’s glaring deficits of democracy and abuses of human rights.’
Theodore M. Vestal, Oklahoma State University, USA

‘The book is a superb analysis of Ethiopian federalism. It elucidates how democratic centralism and development state model intertwined and operate as an ideology of legitimation. The book is a unique academic work that incorporates socialist federation which helps readers get insight into the ideological underpinnings of the TPLF/EPDRF notion of federalism. Dr Semahagn Gashu Abebe’s book is an excellent contribution to Ethiopian Studies.’
Solomon Gashaw, University of Minnesota-Morris, USA