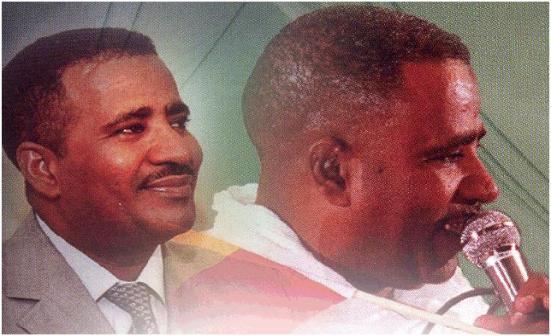 “Enlighten the people generally, and tyranny and oppressions of body and mind will vanish like evil spirits at the dawn of the day.” -TJ

Behold, he is daring, he is a rebel and the fearsome black lion is roaring.

Millions of his fans often say Shambel Belayneh is the undisputed successor to the late legendary entertainer Assefa Abate of “Yematibela Wef” fame. But some go a bit further and compared this larger- than- life character to US patriotic songs and country music icon Lee Greenwood, the man who sang the timeless and the most recognizable “God bless the USA”.

Back home in Ethiopia where his songs are totally banned, even the most unpatriotic snobs will agree that Shambel Belayneh’s latest patriotic hit titled “BEKA” with its lively melody and widespread appeal, is as rabble rousing as the 1865 hit “Marching through Georgia” by Henry Clay work.

Rebel artist Shambel Belayneh is no Demimondaine. Patriotism is his peculiarity. His natural milieu is that of patriotic artists. As we Ethiopians begin to see a whiff of freedom in the air, only Shamble’s miscellaneous hits are going to unshackle the minds of millions of undemonstrative citizens and propel them towards freedom, liberty and fraternity.

This courageous crowed puller and Masinko genius, Shambel Belayneh, always gets enthusiastic support from his passionate fans hungry for mesmerising and delightful folk music feast. Homesick Ethiopian exiles and refugees, who complain of weariness from labour, love the manner in which he renders his music to them, with great majesty and amazing fluency. Cheering them up by the soothing dreamlike sweet melody.

As the godfather of traditional patriotic songs of Ethiopia, Shambel’s ambient music is easy to connect with. It has the power to uplift the soul, awakening in us the spirit of compassion and love, independence, rebellion and even anger. It also vanishes our blues or conjures up memories of our great past in anti-colonial struggle. Shambel’s song awakens the hero in us to surmount all obstacles and Marches us off to war. – To a just war of liberation.

One die-hard fan who danced to “Tekebresh Yenorshew” hit later described the experience by stating “the brooding melancholy that had settled over my mind was charmed away by the power of Shambel Belayneh’s Masinko and when my adrenaline peaked, my torment was lifted after which i saw my beloved Ethiopia in flesh.”

Selam Haile, 29, an Ethiopian student in Pretoria-South Africa, calls Shambel Belayneh a singing Nightingale who pours out a thrilling melody that leaves a lasting joy in the heart.

Although some “Azmaries” inadvertently get the credit, Shambel Belayneh is the only patriotic singer who never tried to wheedle Ethiopians in to accepting brutal repression and slavery in the past 24 years.

A born revolutionary and selfless patriot, Shambel is not a tiresome pedagogue, singing about yester year Ethiopia and yester year greats only. He fearlessly magnifies our current magnificent sons and daughters, immortalises those who watered the trees of freedom with their precious blood.

We all know that music powerfully touches our lives. It moves, enchants energizes and heals us. But it can also jar and twist us, filling the heart and the mind with gloomy thoughts, distracting us and saturating our thinking with undesirable propaganda. I remember how a certain singer we Ethiopians have unutterable love for, recently gave us an immoral song called “Gomen Betena”. The unforgettable trash was a direct call on ordinary Ethiopians to just eat cabbage in peace rather than fight the ruling elite to get some nutritious luxuries. As cadre singer, the man was clearly trying to press upon our consciousness that the regime currently ruling Ethiopia is undefeatable. He further advocated through his song that we should not rebel against the system but settle into depressed complacency.

In the past 24 years, we have seen a plethora of Ethiopian artists, who wholeheartedly fought tyranny through their music giving up and surrendering to the rulers. They flew home after striking dodgy deals with feared TPLF agents. However, shortly after landing in Addis, they were deplorably used as well- oiled ethnocentric propaganda machinery which guerrilla- markets hatred and ethnic disharmony in the Ethiopian society. –A deserved job for being led by their avarice and betraying their principles.

No wonder some so-called “traitor-artists” incurred the wrath of this sunshine patriot Shambel Belayneh. During his recent fundraising concert in the US, Shambel mocked and belittled singer-turned cadre, Solomon Tekalign, calling him the dog of TPLF shadow propaganda minister Bereket Simeon; – “Solomon Tekalign ye Bereket wusha.”

As much as he is meek, convivial or as those close to him say, an Angel with temperance and humility virtues, no one stands before Shambel Belayneh when he is pissed off. Once this writer was at the receiving end of his red-hot rage for not delivering the Masinko to his hotel room on time. The next day he accepted my sincere apology with mischievous smile but kept drivelling on about it for hours. “Respect the folk music magnate and he will respect you back” am told by his producer, Daniel.

Nonetheless, given how he has been treated by the Diaspora for the past two decades, the hardship he had to endure in the name of Ethiopiawenet, at times struggling to keep the wolf from the door, the man who seems betrothed to his beloved Ethiopia for eternity, doesn’t rage at the injustice of life in exile. Even when i pressed him to say more, he was outwardly calm and betrayed no sign of discomposure; an unparalleled hero in almost every aspect with unmatched resilience and courage.

When below-average, mammon worshiping singers got their reward for praising tyranny and ethnic apartheid, Shambel Belayneh, the rock, refused to sell his soul and chose to suffer for the sake of Ethiopia. He rejected the millions dangled before him to join the club of immoral millionaires with the contempt it deserved.

Hence life in the US hasn’t been rags to riches for Shambel Belayneh as in the writings of novelist Horatio Alger Jr. Instead, it was a transition from relative obscurity to an instant fame as symbol of resistance, with his star shining hundred times brighter than any other artist of our time.

We Ethiopians fondly remember how Shambel Belayneh burst onto the scene several moons ago, straight from the mountain- top Eden of northern highlands. Who will forget how his folk music masterpiece titled “ye Zenaye” came cascading down like the mighty waters of Geon from the majestic mountains of Abyssinia. In that memorable song of two melodies of one tapestry, the young shepherd likened a certain drop-dead gorgeous girl (probably his boyhood sweetheart) to the sweet-smelling tropical plant called Demakese, a natural remedy for cold and frostbite.

“Ende Demakese medhanit neberch”…was a jewel among Shambel’s other lilting and rhythmic songs that would never fade away from our memory. What a blessing was that he picked Masinko rather than the flute, normally associated with the romantic names of Abyssinian shepherds.

However, currently, Ethiopians are imploring him for more patriotic songs as the struggle for freedom moves to another level.

is on everyone’s lips from New York and Johannesburg all the way to the Eritrean desert, our new home. We have got our war and the freedom train is in motion. We are heading north to join PG-7 and our commander-in-chief, his Excellency Prof Berhanu Nega, whom we affectionately call the “desert fox”.

We salute you Shambel Belayneh and kings to you. We shall never forget you and the battle cry is reverberating……