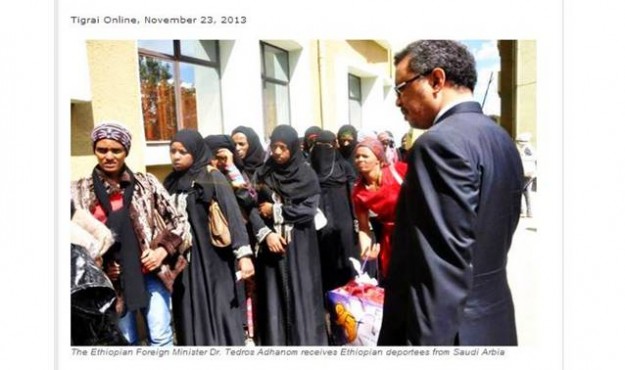 According to Tigrai on line web site that published it the good Dr. is welcoming our deportees from Saudi Arabia. As you can see there are lots of problems with this assertion. It just looks like the people he is welcoming don’t seem to be aware of the presence of such a high ranking official, the future Prime Minister in their midst.  The good Dr. seems to have landed from out of nowhere. Is it possible he was in charge of keeping the line moving in an orderly manner, if so does he moonlight as a security guard in his spare time? Where is the stick, normally Woyane security always carry a stick to whip citizens into compliance or maybe he is a humane guard since he is highly educated. 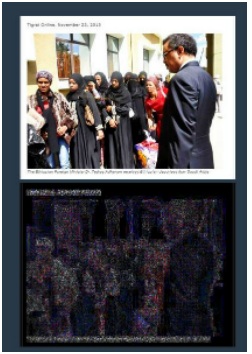 Also what is with this scale discrepancy? I know our Tigrean warriors are big and strong but really do you think this picture takes that a little bit further? If you remember old Chinese propaganda posters always showed Chairman Mao bigger than life, is it possible our cadres are schooled in the same manner? It is a little scary here because if as a Foreign Minster he is shown to be about 15% bigger imagine what would happen when as ‘written’ he is promoted to Prime Minister?

Using photo shop is an old trick. The Soviet Union used to rub out leaders from old pictures when they fall off favor. It is to make it look that they never existed. Today photo shop is used in fashion photography to sell products and make the subjects prettier than they already are. Photo shop is a science and an art. It requires plenty of training and know how to trick the eye and the brain to accept what is a little too much to be true.

Unfortunately our Tigrai on line friends did not think it important to acquire that knowledge. It is also possible like most Woyanes they have a little bit of introductory course and decided to graduate themselves. Why else would anybody publish such a silly, amateurish work for the whole world to see? It is also possible that they lie and cheat so much they have lost respect to their audience.

We also took their silly picture to FotoForencsics web (http://fotoforensics.com) site and subjected their picture to stress analysis. I know the photo is so obvious there is no need for further analysis but this is just a favor to the idiots at Tigrai on line so in the future they are aware of such a tool and test their work before throwing it on our face. Woyane never stop to amuse us, do they? We thought their children would know better, as they say like father like son. (ግም ለግም አብሮ ያዝግም)