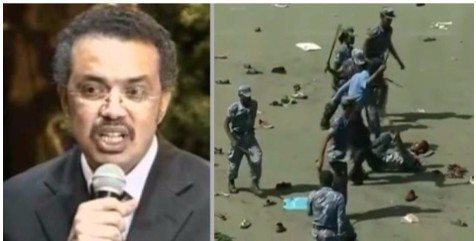 Dr Tedros Adhanom: A TPLF central committee member, a criminal who is leading the WHO will be a keynote speaker at the Columbia University World Leaders Forum to be held on September 19, 2017 at Casa Italiana, 1161 Amsterdam Ave., New York.

Dr Tedros Adhanom has been and still is a member of a killing, torturous and genocidal regime that has perpetrated crimes against humanity in Ethiopia.

For the past twenty-six years, a regime controlled by his party,the Tigrayan People’s Liberation Front (TPLF), in Ethiopia has been committing horrible deeds including the killing of more than one thousand peaceful demonstrators, mass imprisonments, extreme torture of opposition leaders and opposition members and bloggers, forced displacement of thousands of indigenous people from their native lands, widespread murder, rape, torture and massacre of members of the Anuak, Oromo, and Amhara ethnic groups.

This regime is well known for stifling dissent and journalistic freedom. These behaviors are well documented by respected human rights organizations like Human Rights Watch and Amnesty International as well as the US Department of State.  While human rights organizations and the UN Secretary General have called for independent investigations on the killings of peaceful demonstrators in 2016, the government has refused the request several times.

In addition to the killing and torturing of its people for the soul purpose of prolonging its brutal rule, the ruling party is involved in a lot of illegal businesses that tunnel all the country’s resources to a few individuals that rule the country more like a mafia-type organization than a legitimate governing body. As it is completely despised and rejected by the Ethiopian majority, it is intentionally encouraging ethnic cleansing to facilitate and prolong its divide and rule days. Dr Tedros is one of the key players in designing the ethnocratic system from which he, his family and close relatives are main benefactors. Dr. Tedros has been and still is a key figure in executing unspeakable tragedies on Ethiopians using a special military force called the Agazi. Because of the TPLF,many Ethiopian mothers have buried their children, many siblings have buried their brothers and sisters, and so many families have been given broken hearts, empty beds and empty chairs.

Dr. Adhanom is also accused of covering Cholera outbreaks in some parts of Ethiopia for political reasons. The fact that he can have a forum in a prestigious academic institution like Columbia University in a free country like the US that respects human rights and opposes torture and massacre is a travesty to humanity and a very sad reality for the majority of Ethiopians.

During his visit to Columbia, we ask that you question him of his associations with the TPLF and raise questions about the killings of peaceful demonstrators, the torture practices he endorsed on his party’s opponents and the despicable corruption and ethnocentric rule his party imposed on close to one hundred million Ethiopians.

Since his election, Dr. Adhanom has been defending the unjustifiable terrorization of Ethiopians by his party. He has denied the imprisonment of bloggers and journalists for exposing and telling the truth about his regime. Even after becoming the leader of the World Health Organization (WHO), he maintains his staunch support to a killer regime, and he and his party have never apologized for killing peaceful demonstrators. The regime has crafted an anti-terrorism law designed to put all opposition in prison and claim a one hundred percent win in none democratic, fake elections. This is the unfortunate reality people in Ethiopia face while a killer like Dr. Adhanom has been rewarded with the opportunity to lead the WHO.

For further information on the regime’s human rights abuses, please refer to the following samples: