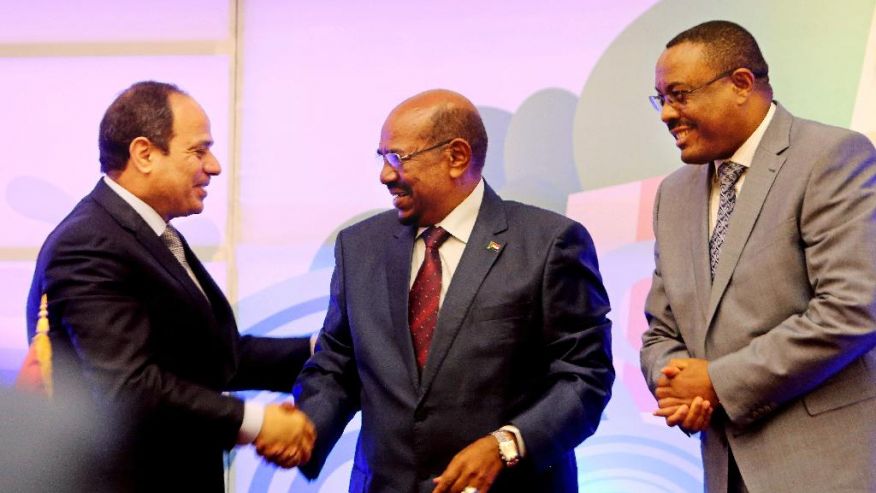 In our April 30 2014 commentary which appeared on several media outlets, we outlined the fallacies of the Egyptian policy towards GERD.  It appears that the last few months have witnessed breath-taking diplomatic developments. For one, Egypt has returned to the African Union. It also has been reported that there were several rounds of side and formal meetings between Ministers and the Heads of States and Governments of Egypt, Ethiopia and Sudan. Egypt has also shown a renewed interest on Africa.  A number of African leaders attended the recently held economic summit in Egypt which unveiled a new project that aims to build a new city near Cairo. Parallel to these on March 23, 2015 Egypt, Ethiopia and Sudan signed a deal that “ends the Nile dispute.”

In its March 23, 2015 edition Ahramonline published the English translation of the deal. If the document is authentic and translation is accurate, we observe that (i) the document contains several complex statements that are hard to translate into practice, and (ii) many of the clauses favor Egypt much more than Ethiopia. In fact, it is not clear what Ethiopia is getting out of this agreement other than allaying Egypt’s official opposition to the dam. Indeed, Egypt appears to have succeeded in forcing Ethiopia to perform near impossible tasks as any perceived negligence or underperformance can serve as a ground for declaration of dispute. No free nation should be submitted into such a contract voluntarily.

Furthermore, a day after the signing of the “deal”, President Abdel Fattah el-Sisi of Egypt is traveling to Addis Ababa reportedly to address the joint session of the Ethiopian Parliament. Evidently, his mission cannot be anything less than selling the “deal” in Ethiopia. In short, the event appears to be a prelude for the ratification of a document that favors Egypt more than Ethiopia.

While welcoming the tripartite cooperation, we request that the “declaration” be translated into Ethiopian languages. We also ask that an open debate be held in all three countries and the riparian states before the matter is presented to the Ethiopian Parliament. In order to do so, the document should remain an MOU, be revised to address the concerns of citizens and be ratified and take the form of treaty agreement only after proper deliberations are made. Furthermore, as Ethiopia is on the eve of an election, ratification should be deferred until the new parliament is constituted.

Full text of ‘Declaration of Principles’ signed by Egypt, Sudan and Ethiopia

In an important step towards resolving a long-running dispute over the Grand Renaissance Dam, the leaders of Egypt, Ethiopia and Sudan have signed in Khartoum a declaration of principles as follows.

Ahram Online publishes a translated version of the “Declaration of Principles” signed by Egypt, Sudan and Ethiopia in a step to put an end to a four-year dispute over Nile water sharing arrangements among Nile Basin countries. Ten principles are outlined in the document signed by the three countries.

Valuing the increasing need of the Arab Republic of Egypt, the Federal Democratic Republic of Ethiopia and the Republic of the Sudan for their over-border water sources, and realizing the importance of the Nile River as a source of life and a vital source for the development of the people of Egypt, Ethiopia and Sudan, the three countries have committed themselves to the following principles concerning the Grand Ethiopian Renaissance Dam:

– Cooperation based on mutual understanding, common interest, good intentions, benefits for all, and the principles of international law.

– Cooperation in understanding the water needs of upstream and downstream countries across all their lands.

The purpose of the Renaissance Dam is to generate power, contribute to economic development, promote cooperation beyond borders, and regional integration through generating clean sustainable energy that can be relied on.

3. Principle of not causing significant damage:

– The three countries will take all the necessary procedures to avoid causing significant damage while using the Blue Nile (the Nile’s main river).

– In spite of that, in case significant damage is caused to one of these countries, the country causing the damage […], in the absence of an agreement over that [damaging] action, [is to take] all the necessary procedures to alleviate this damage, and discuss compensation whenever convenient.

4. Principle of fair and appropriate use:

– The three countries will use their common water sources in their provinces in a fair and appropriate manner.

– To ensure fair and appropriate use, the three countries will take into consideration all guiding elements mentioned below:

b. Social and economic needs for the concerned Nile Basin countries.

c. The residents who depend on water sources in each of the Nile Basin countries.

e. The current and possible uses of water sources.

f. Elements of preserving, protecting, [and] developing [water sources] and the economics of water sources, and the cost of the procedures taken in this regard.

g. The extent of the availability of alternatives with a comparable value for a planned or a specific use.

h. The extent of contribution from each of the Nile Basin countries in the Nile River system.

i. The extent of the percentage of the Nile Basin’s space within the territories of each Nile Basin country.

5. The principle of the dam’s storage reservoir first filling, and dam operation policies:

– To apply the recommendations of the international technical experts committee and the results of the final report of the Tripartite National Technical Committee during different stages of the dam project.

– The three countries should cooperate to use the final findings in the studies recommended by the Tripartite National Technical Committee and international technical experts in order to reach:

a. An agreement on the guidelines for different scenarios of the first filling of the Grand Ethiopian Renaissance Dam reservoir in parallel with the construction of the dam.

b. An agreement on the guidelines and annual operation policies of the Renaissance Dam, which the owners can adjust from time to time.

– Accordingly the three countries are to establish a proper mechanism through their ministries of water and irrigation.

– The timeframe for such points mentioned above is 15 months from the start of preparing two studies about the dam by the international technical committee.

6. The principle of building trust:

– Downstream countries will be given priority to purchase energy generated by the Grand Ethiopian Renaissance Dam.

7. The principle of exchange of information and data:

– Egypt, Ethiopia and Sudan will provide the information and data required to conduct the studies of the national experts committees from the three countries in the proper time.

8. The principle of dam security:

– The three countries appreciate all efforts made by Ethiopia up until now to implement the recommendations of the international experts committee regarding the safety of the dam.

– Ethiopia will continue in good will to implement all recommendations related to the dam’s security in the reports of the international technical experts.

9. The principle of the sovereignty, unity and territorial integrity of the State:

The three countries cooperate on the basis of equal sovereignty, unity and territorial integrity of the state, mutual benefit and good will, in order to reach the better use and protection of the River Nile.

10. The principle of the peaceful settlement of disputes:

The three countries commit to settle any dispute resulting from the interpretation or application of the declaration of principles through talks or negotiations based on the good will principle. If the parties involved do not succeed in solving the dispute through talks or negotiations, they can ask for mediation or refer the matter to their heads of states or prime ministers. (Source: [MENA and Ahram Online, Monday 23 Mar 2015])