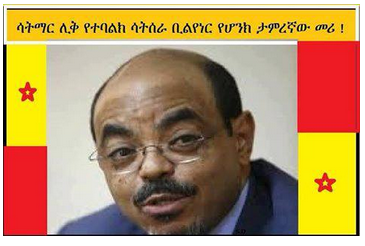 The last seven years or so I have been writing opinion pieces on the political situation in our homeland. Naturally I have discussed the late Prime Minter Meles Zenawi and his central role in charting the direction our country should follow on the road he envisioned to improve the life of our people. Prime Minter Zenawi ruled over our country for twenty one years. One can say from 1991 when the TPLF took over to 2001 when the split within the party took place in the aftermath of the Eritrean Conflict the TPLF operated in a primitive semi democratic group type of leadership which they brought over from their days fighting the Derg.

The split that took place in 2001 changed the dynamic of the ethnic based outfit. It did not take long for Meles Zenawi to assert his position as the Capo di tutti capi (boss of all bosses) in the Mafia outfit that was masquerading as a political party until his death in 2013. The 2005 General election was another defining moment in the relationship between the TPLF Party and Meles Zenawi on one hand and the people of Ethiopia on the other.

From 1992 to 2004 Meles Zenawi and his party were busy redrawing the map, rewriting our history, granting independence and redefining our national priorities and felt comfortable in their accomplishments. In fact they were so sure that they have constructed a solid foundation that will withstand any and all challenge by what they thought to be a desperate amalgamation of discredited and demoralized opposition that they allowed an open semi free election. Meles called the move “a calculated risk.”  Obviously it exploded and back fired on his face.

The election changed the whole dynamics of the relationship between Meles Zenawi as a leader and the Ethiopian Nation as his responsibility. His earlier misgivings about Ethiopia as a nation, his deep seated hatred towards the rest of Ethiopia in general and the Amhara in particular, his always nagging feeling that people did not give him credit for being an Ethiopian was validated by the complete rejection of his party in every village, town and city all over the country. The election was a watershed moment in the life of Meles (Legesse) Zenawi Asres.

I brought this all up because in order to understand the latest news regarding the personal wealth of Ato Meles it is important we have a good perspective on what drove the individual to engage in such massive crime of the first kind that the whole idea boggles the ordinary mind. Because of the many atrocities visited on us we have taken the news in many peculiar Ethiopian fashion which I am sure is difficult for others to comprehend. We have become desensitized to the crimes of the Government and we do not react in a rational or normal manner like the rest of humanity. I believe this situation is a glaring example of that strange Ethiopian behavior towards crime, the criminal and the victim. It is not nice to say but I am afraid we have a long way to go before we learn to assert our human right and dignity and demand respect as a citizen endowed with certain unalienable Rights

The richest.org (http://www.therichest.org/) an internet site that publishes the net worth of rich and famous people in the world in its recent publication included none other than our own Meles Zenawi in the company of other billionaires in its ranking. I am certain we all looked twice to make sure someone is not playing tricks on us. I am afraid it is true. There is no reason to doubt why the folks at richest.org would pick on our guy unless they have verifiable facts in order to splash his name and picture on the front page.  Of course they are aware his wife and family will sue the hell out of them if there was no truth to their assertion and pay dearly for it too. Up until now no one has come forward to set the record straight if mistake was made.

What they publically splashed across their front page was Meles Zenawi is worth $3 Billion US dollars. His profession is given as a politician and included details about his length in office and marital status. As an Ethiopian this for me is a very troubling question that I must answer to myself to satisfy the many questions twirling in my head. To be frank with you I have no concept of a billion dollar and I am afraid even a million is beyond my pay scale. How did Meles Zenawi do it?

We know for sure Meles Zenawi never worked for wages until he became the President of Ethiopia in 1991. He came to the job with the clothes on his back; I am sure some books and most probably not even a wallet in his pocket. He had no needs for all that while engaged in fighting the Derg. Ever since that day he has stayed in Arat Kilo and has never engaged in a profitable business, been officially involved in any partnership that we know of or known for his keen sense of entrepreneurship. He has been a political leader. The nagging question again is how does one amass 3 billion dollars while not engaged in a business enterprise? What exactly is this special ability he possessed that turned according to his wife a four thousand bir a month salary into a 3 billion bonanza in less than a decade?

Since he is dead I am afraid we are unable to ask the individual. Whatever form his wealth is in it is safe bet to assume it is not invested or sitting in one of our banks. But one fact we know for sure is that the folks at the richest.org were able to find out and verify their data in order to publish such information. Of course we can summarize how one makes a lot of money being a political leader and we wouldn’t be off the mark. The only way open to such an individual is corruption and using the power of his office for personal gain. I am afraid it does not require a degree in nuclear physics to figure that out.

In hind sight it is possible to pinpoint the period when the Prime Minster decided to engage in such outright petty theft of our National wealth and help himself and his family in this criminal behavior by looking at the political and economic situation in our country. I will bet anything that 2005 was the point in time that the dictator turned rouge and decided to pay us back for the perceived betrayal and ungratefulness for his sacrifice on behalf of our Nation. You see the problem with disturbed and mal adjusted people is that they always believe their selfish deeds is in the interest of others and they do not take rejection kindly. The 2005 election was what drove our tyrant to the abyss and that trend continued to the end. Three billion dollars is not a small matter and it requires some unfulfilled deprivation to satisfy. We are of course finding out today the little tyrant was up to the job.

What we do with this information is what interests me the most. After all we know he did not earn it. The natural assumption is he stole it from us. That I am afraid is not off the mark since he did not take it with our permission. The question to our people and nation is what do you exactly do when someone illegally takes what belongs to you? Really except for an Ethiopian this is such a pedestrian question it is enough to roll one’s eyes and say whatever dude! Naturally if someone robs you and you know who, it is safe to assume you would call the police on the individual or take him/her to court to get redress.

That is what I am hoping we do. Get off our righteous anger, get over our surprise, put that cynical behavior behind us and earnestly look for ways to recover what is legally, morally and justifiably ours. I have a few proposals to make that I think is not beyond our ability to try to do. The people of richest.org have already done the best part of the job for us. They I am sure without much personal motivation have been able to find out the dead guy certainly stashed all that money away. Thus I am assuming we have such an incentive to move heaven and earth to follow the trail and uncover every penny of what is taken from us. This is what I think we should start with:

10. Respectfully ask ESAT to use its journalistic knowhow to investigate and expose this national shame.

All the above are not beyond our ability to accomplish. It is up to each one of us to take the initiative to help our country and people recover what is stolen from us. Three billion dollars is a lot of money and it could be used to open schools, hospitals, improve water supply, and bring better sanitation service and other needed projects to improve the life of our people. It is not fair or morally right for one family to illegally take what belongs to all of us.

I am afraid this is the tip of the iceberg. If the person in charge was helping himself to the till we should also assume those around him were not sitting idle. Thus the possibilities are more than excellent that top officials of TPLF such as Seyoum Mesfin, Arkebe Uqbai, Berhane Gebre Kristos, Tedros Adhanom, are sitting on a pile of money that cannot be explained easily. It is imperative we demand a through explanation regarding their net worth, how they acquired it and where exactly it is invested at the moment. As government officials they are obliged to answer or face the consequences. They owe our nation an explanation and it is not unfair to ask those who hold political power to explain the source of their wealth. I am not accusing but as a citizen it is our right and obligation to make sure no laws have been broken by those that are supposed to enforce it.

I believe this is a very important matter and cannot be ignored, laughing off or dismissing it off hand is not good enough. When you consider the amount of money the Diaspora remits to help their family and friends it is absolutely not fair that those sitting in charge would just turn around and put it in their pockets for personal and family use. The money the Diaspora makes comes by sacrifice, hard work and plenty of sweat. It looks like our officials starting with the late PM feel entitled and think nothing of putting their dirty fingers in the till. If we let such criminal activity take place under our watch and do nothing about it I am afraid we have no moral ground to call our country home, to carry the flag and celebrate our gallant ancestors that paid a price to preserve what we today call Ethiopia. When we let such criminal act and national abuse go unchallenged I am afraid we we invite more abuse and we have no one to blame but ourselves.  I used to think of the late dictator murderer (Professor Asrat, Asefa Maru), Human Right abuser (Kinijit leaders, Bertukan Mideksa, Eskinder Nega, Bekele Gerba, Abubeker Ahmed) now I can add another designation to his hall of shame – grand larceny.  (Photo: provided by the writer)