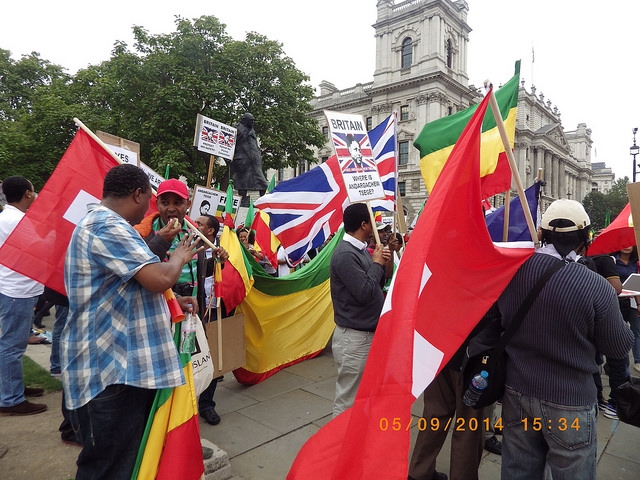 5th September 2014 will go down the history of Diaspora Ethiopians as a one of the great events in the struggle against the treacherous Woyyane regime. It was the third time that Ethiopians from all over Europe came together to raise a storm on the streets of London. The first was on 8th December 2005[i].   The 2nd was on 9th April 2009, when Meles Zenawi came to take part on the G20 London at Excel Business Centre. Now this one raising dust in London with a boom!

It appears that the ethno-apartheid Woyyane gangsters do not like when it is quiet. It had been quieter form some. The the Qinijit (Collision for Unit and Democracy – CUD) leaders imprisonment at Qality up to April 2009 and the re-imprisonment Ms Birtukan Mideksa did indeed saw Ethiopians on the streets of major cities across the world. There were powerful movements, which gave bleeding noses to Woyyane officials in April 2011, when they ventured out with their bags and baggage to beg for money across the USA and European cities. The Diaspora totally ruined their plan and sent them back empty handed. Ethiopians in London would never forget the day they chased them out of The Imperial College of London hall. Elsewhere, Ethiopians did the same and more humiliating offence against the traitors. However, the heat against Woyyane did not continue at the same rate. Ethiopians came out in Unison in December 2013 due to the inappropriate maltreatment of Ethiopians in Saudi Arabia to protest at the Saudi Embassy[iii]. However, that was not aimed at Woyyane. Woyyane had a good rest from us. Not this time. (Click here to read the full report)