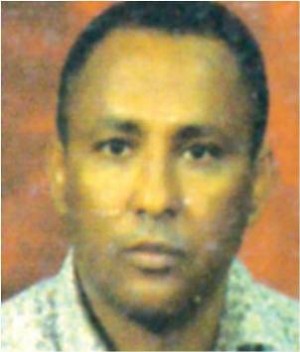 He was the dead tyrant Meles Zenawi’s alter ego and docile horse for 21 years and the most feared man in the complex TPLF security cluster. He amassed millions through corrupt practices and managed to build his own kingdom in partnership with equally corrupt former first lady Azeb Mesfin and her daughter Semhal Meles, the two queens of his vast empire.

The malevolent warlord was well protected by the Zenawi family for 21 years and well placed in the inner circle of the ruling elite where lack of maturity among the junta often led to political upheavals, quarrelling, divisions, and susceptibility to large-scale thieving.

However, exactly one year after Zenawi’s death, a TPLF splinter group led by the ‘retired’ old codger Sebehat Nega, convinced chief spy Getachew Assefa to capture the vulnerable Woldselassie Woldemicael and throw him into the dark cells of central intelligence prison in Addis Ababa.

He was caught while enjoying the transcendental beauty of one of his flower farms outside Addis Ababa, near Holeta Genet town.

The most violent man who allegedly killed Zenawi’s ideological rival, former minister of communications Ato Ayenew in front of his wife and children and gained more notoriety when he pulled out a machete and barbarically chopped off the head of former palace security boss Tegadalay Zerhu, is now awaiting his fate after being arrested on corruption charges last week.

“Today I reaped a great harvest for the great leader.” The condemned warlord nicknamed by the ruling Tigre coterie “the red Khmer Rouge” reportedly told his commander whose name is known to the Horn Times after the gruesome killing of tegadaly Zerhu.

According to our sources inside the TPLF hierarchy, tegadaly Zerhu sympathizers who were longing for justice since Zenawi’s death are currently preparing to bring additional charges of murder against the jailed super-rich warlord.

“His fatal strategic error was that he remained loyal to Zenawi’s wife even after the tyrant’s death while others quickly switched side and joined the powerful Sibehat Nega clique. The ill-educated Woldesilassie played the loyalty game badly and ended up in jail. I doubt if he ever walks out of that prison alive. The desire to enjoy his corruptly accumulated wealth undisturbed has been lost because of his own terrible miscalculation of circumstances.” A political analyst based in Addis Ababa told the Horn Times.

“No one in the rival camp is safe or able to remain unruffled in the face of such onslaught disguised as anti-corruption drive. Tigray republic president Abbay Woldu, adviser to the Prime Minister Berket Simeon and, more important, mother of corruption Azeb Mesfin are deeply disturbed by the arrest of Woldesilassie whom they regard as their son. The cornered widow of the late ruler even let loose a torrent of swear-words directed at spy boss Getachew Assefa, but mark my words, she is next.” The analyst added.

Moreover, according to other credible reports obtained by the Horn Times, since her removal as CEO of EFFORT few days ago, Azeb Mesfin has been barred from leaving the country until the ongoing investigations into misappropriation of funds; tax evasion, money laundering, and alleged corruption are completed.