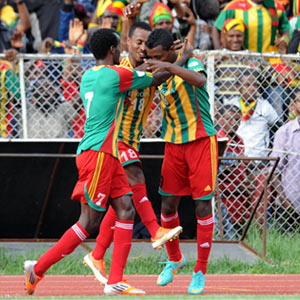 “We want to go back to the drawing board and make very tangible plans that will help us in our preparations ahead of very important matches that will decide our destiny and determine if our dream of qualifying for the world cup is fulfilled.” Coach Sewnet Bishaw of Ethiopia speaking to super sport.com.

“Today is indeed special for me since it was an important match and that goal I scored gave me a lot of motivation especially knowing my friend Getaneh Kebede was out injured. We have always dreamed of this great moment (but) Allah is great our dreams are taking shape.” Star striker Salladin Sayed speaking to super sport.com after yesterday’s match.

Blessed with an array of talent, the sweetly arrogant and boastful Sewnet Bishaw (pictured) once again spoiled African football lovers with unique style of technique and artistry synonymous with the black lions, completely dropping the usual steel and passion approach during Saturday’s another excellent Ethiopian soccer spectacle in Congo- Brazzaville.

One of the best emerging coaches in Africa, Sewnet masterminded the 2-1 win over the stubborn minnows without the glamour boy of Ethiopian soccer and the heartbeat of the black lion’s engine room, Addis Hinsa. The mid-field general was over looked in favor of the new kid on the block Salahdin Bargecho, who showed industry and nifty footwork only expected from a seasoned professional.

Leading goal scorer and mercurial finisher Getaneh Kebede had to be withdrawn at the last minute due to injury and the shrewd tactician Sewnet Bishaw picked Umed Ukweri to partner star of the show Salahadin Sayed up- front.

“We know the style of play (by) the CAR players and we have come to Brazzaville prepared knowing very well we will be celebrating after the 90 minutes…am sure about this and personally I think it will be an easy match for us.” Sewnet told sport journalist Collins Okinyo at Olympic palace hotel prior to the tense encounter.

However, with six new players in Samson Assefa, Fasika Asfaw, Salahadin Bargecho, Dereje Alemu, Gebremariam Yacob and Medihane Taddese called up for the decisive battle of Brazzaville, amongst millions of demanding black lions fans around the world, very few shared Sewnet’s enthusiasm of an easy win.

Where are the tried and tasted black lions who easily trounced the highly overrated South Africans 2-1 at slaughterhouse Addis Ababa Stadium in August? Why risk defeat by making unnecessary changes? Was it not real madness to experiment blending youth with experience at a crucial world cup qualifier match? Why omit the powerhouses such as Aynalem Hailu, Yared Zinabu, Dawit Estifanos, and the bully himself- the temperamental defensive kingpin Elias Biadgeleng?

The first half-nervy and poor display against a determined Central African Republic team exacerbated the fear of elimination when Salif Keita easily beat hapless goal minder Sisay Bancha from close range on the 28th minute after a defensive blunder by leader of the pride, Captain Degu Debebe.

Nevertheless, the second half demonstrated why the well-drilled black lions have become the most celebrated team in African continent when they took the opposition by the scruff of the neck and pinned them in their own half with veteran midfield maestro Adane Girma totally dominating the stunned Central Africans.

It was his outrageous defense-splitting pass, which led to the equalizer by Salahadin on the 48th minute. The winning goal came on the 61st minute when the tricky Minyahel Teshome connected to Adane Girma’s pass and beat CAR goalie Prince Samolah hands down.

Although the man of the match award deservedly went to Adane Girma, the two young black lions among the new talent on display, Behailu Assefa and jersey number 13 Salahadin Bargecho showed super resilience and performed admirably declaring that the meteoric rise of Ethiopian football is not going to be just a one-season wonder.

“I feel so proud we have achieved our dream. My players showed great resilience and focus despite conceding an early goal and that showed great character by them under immense pressure. It has been a long road but I can say we are almost there and it is time to now focus on the play offs which are very crucial.” The coach told super sport.com smiling ear-to-ear.

It was mission accomplished.

In 2006, the dead anti-sport tyrant Meles Zenawi referred to the black lions as fearful soldiers in comparison to his TPLF fighters and repeatedly mocked and humiliated them in public, totally refusing to build a single world-class stadium during his 21-year brutal rule.

“Of course the despot’s death opened the way for our football to blossom and we qualified for AFCON South Africa shortly after his funeral and now we are very close to go to Brazil.” Demelash Tsegaye, 47, who travelled from Johannesburg to Brazzaville to watch his beloved black lions, told the Horn Times up on his return on Sunday afternoon.

According to Demelash, finding a reliable shot stopper in the country or naturalizing one must be the priority before the final round kicks off shortly.