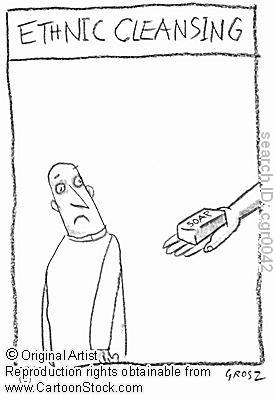 This article is intended to reach out to innocent citizens who might have been confused with political propaganda and underestimate the negative consequences of ethnic politics. It is to remind fellow citizens, as a concerned and responsible citizen that we need to take measured steps in our effort to support political parties. Simply stated people’s major interest is to have peace and equal opportunities in their own country. The interest of political elites is different, more than anything; it is to be on the helm of power. No amount of sugar coated words from political elites should dissuade us, citizens.  With a salt of grain, this saying clearly illustrates the feelings “Politicians are mostly people who had too little morals and ethics to stay as innocent citizens.” The only reason why political elites reach out to innocent citizens is because they cannot come to power without the help of the people which the elites claim that they have a vested interest.

In most of well developed countries where Ethiopians in diaspora lives there are two things that shall never mix with State governments.  These are religion and ethnicity, although ethnicity is not much of a problem in these countries. Like in any other advanced countries, most people in under developed countries such as Ethiopia also agree that religion should be separated from State government. Even we hear the current government in Ethiopia consistently declaring that religion and state should remain separated. Whether the Ethiopian government practiced what it declares or not is a different story. Why separate government and religion? The governments of advanced countries unmistakably understood and predicted the unique danger of religion for democracy. Religious disagreements have potential to escalate avoidable differences to serious strife that might lead the way to untold destruction and killings of innocent citizens. Many people are prone to violence and almost impossible to make peace so long as people oppose one another under the banner of their clashing religious doctrines.

In political recourse ethnicity is not different than religion.  It should be treated like religion is treated in civilized politics. Experiences elsewhere tell that anything that keeps ethnicity away from politics is good. In Africa, as compared to religion, ethnic politics has proven to be even the worst killer. No matter how ethnic political elites sugar coated it, the undeniable fact is ethnic politics institutionalize racism. Citizens should not be gullible to think that ethnic ideology institutionalizes democracy. In multi ethnic society like Ethiopia, it is only democracy not racism that will bring peace and order.  Only democratic political relations offers ethnic relationships in a manner that is characteristic of the civilized societies of the world. Let the truth be told. The whole governance practice under ethnic political system is promoting inequality among ethnic groups as opposed to promoting equality. The inequality perpetrates in institutions such as public government bodies, private business, media outlets, and universities (public and private). These government institutions do not provide an appropriate and professional service to people because of their ethnic origin, just like what racism did in the western countries. No good governance could come out from ethnic political system which the philosophy of the relationship among people is based on nepotism.

What Ethiopians noticed in the recent uprising is that ethnic loyalty has affected our nation’s dream for democracy.  Over the past 20-years ethnic based governance, the EPRDF has increased gaps in social relations among ethnic nationalities and developed structural suspicions and hate for one another.  The Oromo university student who has been phone-interviewed by VOA from a hiding place in Adama is an example.  It doesn’t worth to die for or kill for ethnic political system that is corrupt and structurally incapable to institute democracy for its own ethnic group.

Political elites do and say anything to manipulate the people to achieve their ambition. They violate principles of democracy, override laws, re-write history and even care less for committing genocide in cold blood. That is what the world has observed primarily in Africa, like in Rwanda, Somalia, Congo, Central Africa, the former Sudan, South Sudan, etc … The gruesome incidences that happened in the countries mentioned above did not come from mysterious unknowable forces.  It came from political elites who manipulate citizens’ emotions to provoke intense ethnic conflicts and cause unimaginable damage.  It is neither to advance economic interest nor institute democracy, which they claim bring to its own citizens.

Just like any other countries, for peace to prevail in Ethiopia citizens’ political discourse should be constructive. The vision should be to have an Ethiopia that respects the right of all citizens without discrimination by ethnicity origin or religion beliefs. At this trying moments, Ethiopia needs a purposeful leadership that has a vision of how to place its citizens. A leadership that recognizes and respects the many ethnic groups that make up Ethiopia, and treats all ethnic groups as its constituency and thereby alleviating the fear of ethnic domination. A leadership without recourse to ethnic chauvinism and which sees political power as not an end in itself but a means for serving the collective welfare of its people regardless of their ethnic origin. However, it takes skilful, committed and principled leaders to achieve just solutions that are supported by their followers.