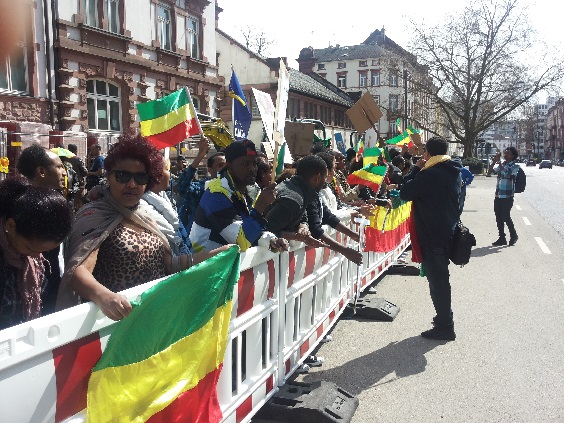 Ethiopians were today on 09.04.2016 on the street of Frankfurt Germany voicing their protest against the 25 years long dictatorial rule of the EPDRF (Woyane) in front of the Ethiopian Embassy. At the time when more than 10 million Ethiopians are under severe drought and famine crisis, the ruling party cadres are in the middle of Europe (Germany) hosting a meeting to discuss on the very possible way that they could prepare huge fests in the Amahra region in order to celebrate the so called “Diaspora’s Festival in Amahra region”. The fact that the ruling party disciples, supporters and cadres thinking of fest and party at such critical time when millions of Ethiopians’ life hang on a thread in lack of daily bread has triggered the anger of the Ethiopians in Germany to gather and oppose these cruel actions.  Demonstrates showed their anger on this Saturday afternoon with unity and oneness. Every one seemed very upset due to the fact the ruling party’s irresponsible actions of spending millions of dollars for unnecessary feasts for example to celebrate the Diaspora Day while more than 400,000 children life is on steak because they lack loaf of bread.

BBC had a broadcast on its news coverage on 31. January 2016 that more than 10 million Ethiopians are under severe hunger. In fact these figure is definitely growing in an alarming rate every single day. In addition Aljezera on its news coverage on 25. January.2016 has compared the drought situation in Ethiopia with the political and human crisis in Syria by stating the bitter reality that more than 400,000 children are in need of desperate food aid.

“Well I am very happy to achieve this goal because it is, it gives us great opportunity and as well as intensives to go forward to achieve even more goals in the next sustainable development agenda. So it is a great achievement and we are so thankful for that.”

The above was the direct quote of the present prime minister HaileMarima Dessalegne on the 7th June 2015 at the FAO (Food and Agriculture Organization of the United nation) in Rome as he took a prize as an example of a country which is self dependent in terms of food and agriculture. The saddest part is that he has not even waited a year to openly and officially urged the world to lend its generous hand because he failed to feed the Ethiopians. What a shame!

“I think if the international community support, it is good, we will continue with that get the support and move forward. And I urge organization like UNICEF, if they think that this is the worst scenario, they have to come in, just talking is not a solution…”. The prime minster has said once in his life the truth “…just talking is not a solution..” That was and is what the Ethiopians saying.

The 25 years dictatorial rule was full of talk and problems but with no correct solution. Coming a long way to the heart of Europe and begging for money to spent it on such valueless ceremony(Diaspora Day) will not bring our country from these horror of hunger and drought. This is why the Ethiopians were on the street of Frankfurt to voice their protest and direct the TPLF people to their sense.

The EPDRF is under huge influences inside and outside the country. Civil disobedience and protests have been intensified in the Oromiya, Amhara and konso region. On the other hand Ethiopians are putting pressure every time the TPLF representatives or cadres arrange meetings or discussions In Europe or North America. Although nature has cause the drought and famine, the ethnic centered and dictatorial rule of Woyane has failed to control the problem in its infant stage.  Opposition parties, journalists, Educators, religious leaders and human right activities had been trying to highlight the fact that TPLF’s dictatorial rule would lead the country into severe problems such as migration, civil disobedience and poverty. However the TPLF’s leaders have intensified their dictatorship and dragged the country into one of the worst hunger and drought crisis in 50 years.  John Graham, director of save the children Ethiopia, has given the following comment on Aljezera regarding the current drought in Ethiopia “…. We have to be very direct now. It is not the time to be nice and diplomatic. Childrens’ life are hang in to the balance.”

Ethiopians who live in and abroad are raising their voice saying it is already too late to handle the Woyanes dictatorial leaders and regime in diplomatic way.  As prime minister Hailemariam urged and begged the international community to lend their hands to get Ethiopia out of this famine, he should probably do the same (urging and begging) his party members to hand over the power because his party brought dictatorship,  killings of civilians,corruption and hunger. The game is lost!