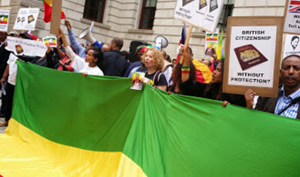 The terrorist regime in power in Ethiopia, the TPLF, has stepped up its campaign of terror beyond its boarder, extending the battle field to include everywhere, to include sovereign foreign lands. Andargachew Tsige, the General Secretary of Ginbot 7 is the latest victim.

The regime had been trying to get to Andargachew Tsige for a long time. After the ill fated election of 2005, they arrested him and tortured him at their Qality concentration camp as a result of which he almost lost one of his eyes. They had tried him in absentia and sentenced him to death. Imagine, this man is a British citizen. On 12 November 2013, we learned that the Woyyane sent an assassin by the name of Muluqen Mesfin to Eritrea to murder Andargachew Tsige. After that and many other failed attempts to eliminate Andargachew the Woyyane resorted to conspiring with corrupt neighbouring regimes officials, bribing them, grabbing fertile farm land from the poor farmer (the international community will be feeding the starving anyway) and offering it to collaborators in exchange for the hands of Andargachew. It paid off for now.

Finally, the regime succeeded in Abducting Andargachew Tsige with the help of some corrupt Yemeni Police officers for the price of US$1 million (one million US dollars) on 22 June 2014 and immediately transported by a special plane to Addis. The regime is addicted to lying. First, the official spokes person of the regime, Getachew Redda, claimed that Ethiopia had no clue on the where about of Andargachew other than hearing his arrest in Yemen, but they were going to demand his extradition from Yemen to stand trial in Ethiopia.  The Nigerian Political Satirist Adeola Fayehun couldn’t believe such a ridiculous thing could take place in the modern world and condemned the barbaric act in her usual sense of humour.

However, after the Human Rights Watch spokes person Leslie Lefkow point blank spelt it out that her organisation has credible evidence that the Ethiopian regime took Andargachew from the Yemeni airport within minutes of his arrest, the shameless regime of Ethiopia did not only admit on its controlled television it had got him but confirmed that it smuggled out Andargachew immediately after his abduction at El Rahaba Airport in Sanaa, Yemen. It went on parading the image of brutalised Andargachew speaking under duress. These criminals seem not to care about the fact that parading on television abducted passenger is a violation of international law. What a shame!

This is a regime that recently fought its way to get a seat at the U.N. Human Rights Council! What a joke! Shame on you Claire Short, for endorsing these mercenaries to such a credible human rights organisation! 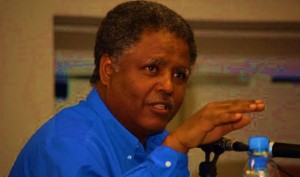 The Abduction of Andargachew Tsigie has ignited a fury among exiled Ethiopians, both who are still living under a refugee status and those who have taken citizenship of other countries. Ethiopians went to the Foreign office on 8 July 2014 to express their anger and frustration about the UK Government’s failure to prevent this from happening. If the UK Government fails to protect its citizens, then it is not difficult to imagine how precarious the situation of those of us who are still refugees under Geneva Convention, living in Britain and elsewhere. Here is a dilemma for the British authorities. Will they keep on doing business with this brutal regime or take a stand and say “No!” to repression? That was what the demonstrators were asking William Hague, First Secretary of State and the Secretary of State for Foreign and Commonwealth Affairs. The transgression Woyyane had committed tests the patience of the British Government, who are one of the biggest donors, pumping tax payers money to keep the most oppressive and brutal regime in power. Now their citizen is abducted, is it going to be business as usual? Forget about talking! You are talking to a brick wall!

Woyyane is a terrorist organisation, from the start. When it was in the bush fighting to break Tigray away from Ethiopia and help Eritrea to do the same too, it had abducted so many foreign aid workers and journalist, burned down schools and hospitals, destroyed so many bridges that earned them a brand name of “Bridge Blowers” or ድልድይ አፍራሽ”. After becoming the government of Ethiopia, that nature never left them. They grew up to adulthood in the bush; therefore, they still act wild. They will never ever act like civilized! That is not in their nature For instance, In 1992, TPLF agents shot dead Jatane Ali, an OLF leader in Nairobi, Kenya.  Some of the former Dergue officials, including Melaku Tefera and Begashaw Atalay were hand-picked by the regime agents from Djibouti.

With Melaku and Begashaw, there was a third a pretending refugee who shared everything with them. The victims had no clue in fact he was a Woyyane mole among the exiled. He shot Melaku and the Woyyane men picked them at once and brought unconscious Melkau back to Ethiopia before any of the Djibouti authorities could say anything. Trust me, at least 10% of the refugees living in Britain are Woyyane agents. Watch videos of Gibot 20’s celebration video at the embassy and you wonder why on earth a refugee wines and dines with the regime that made him/her a refugees in the first place. We have seen those hands in gloves with the Woyyane embassy in London recently at the church row! Some many refugees have been abducted from Kenya and Uganda or killed on the spot by the help of these imposters.

The campaign had reached South Africa. In 1995, they sent an assassin to Zimbabwe to murder Colonel Mengistu Haile Mariam, the former president of Ethiopia. Just recently, on 26 January 2014, the TPLF security gang abducted Mr Sulub Ahmed and Mr Ali Hussein, Ogadenese peace negotiators who were invited to Nairobi by the government of Kenya.  In June this year, the TPLF gangsters kidnapped the former regional governor of Gambella, Okelo Akuayi Ipola in South Sudan and formally charged him on its kangaroo court on 1st July 2014 with terrorism. What an irony! The latest is Andargachew. It doesn’t stop there. Each and every Ethiopian and the community are at risk, both internally and externally. We are sleeping with our enemies.

As per the news reaching us, on this day of 8th July 2014, they have unleashed the wave of arrest throughout the county. Ato Habtamu Ayelew of Andinet, Ato Yeshiwas Assefa of Blue Party, Ato Daniel Shibeshi of Andinet and the outspoken Abrah Desta of Arena Tigray were arrested in the morning and taken to unknown destination, as per ESAT radio report of the day. What for?

Woyyane’s blood tainted hands together with its collaborators’ from the other parts of Ethiopia, including its current puppet Prime Minister Hailemariam Dessalegn,  are out to get us. A good example can be its attempt to infiltrate into our community organisations and churches. The current tooth and nail battle to save The London Debretsion St Mary Ethiopian Orthodox church is part and parcel of the Woyyane campaign to seize our churches, mosques and community associations to control us all. They managed to brainwash some youngsters and deployed them to physically attack us on 14 October 2013 right here in London. No wonder all the five arrested by the Police have all Tigre names.

The regime that has caged Journalists such as Eskinder Nega, Reeyot Alemu and Wubshet Taye, as well as opposition party leaders and dissidents, such as Andualem Arage, Nathnael Mekonnen, Mitiku Damte, Yeshiwas Yehunalem, Kinfemichale Deebe, Andualem Ayalew, Yohannes Terefe, Zerihun Gebre-Egziabher and many others is out and about to get us. What are we going to do about it? 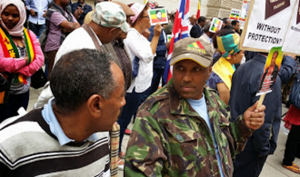 One good thing that is emerging out of this tragedy is the fact that the exiled community in London came out in unison, unhindered by differences in political outlook, religion or race to express its anger at the protest rally in London and elsewhere through major cities of the world. It is interesting to note the name “Andargachew” (አንዳርጋቸው) is made up of two words. They are “And” and “Argachew”. It means “bring them together” or “unite them”. It proved yesterday that Andargachew brought us all together. We have been slumbering far too long, tied down in our churches. Now we have broken free. From now on, until freedom prevails in our country, we shall fight one together! We all are Andargachew!

Unity is power! We shall overcome!

(All pictures provided by the writer)