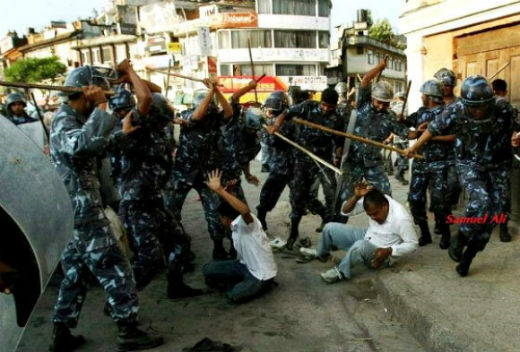 On 9, Aug, 2014 a white police man allegedly shot an unarmed African American teenager, Michael Brown, 18, in Ferguson Missouri, USA. Ever since Washington seemed unable to restore calm and tension in the city. However if the USA had invited  Special Forces of the current Ethiopian government, the whole public chaos and mob would have been quelled in a matter of hours.

For more than the past 23 years the Ethiopian government (EPDRF) has been diligently working in producing Special Forces who are top world class brutal, murders and senseless solders. In order to achieve this goal, USA has been funding the dictator Ethiopian government with financial and military aids.

Ethiopia receives more than 500 million dollars from USA annually, according to an article published by Johsh Kron for New York edition on Aug 21, 2012.US assistance to Ethiopia in FY2010 program highlights around 3,000,000 dollars in military assistance and around 775,000 dollars in military education and training program according to the FY 2010 Request for international affair by the state department. In 2010 alone USA has allocated over 900,000,000 dollar aid to Ethiopia. In addition the FY2012 US military assistance repot Ethiopia received more than 5,000,000 dollars (US Overseas Lands and Grants, Us Bureau of Census (BUCEN) International Database). Of course this military aid along with the economic assistance keeps growing each year. The pretext of fighting terrorism on the horn of Africa enabled the Ethiopian government to build its military muscles and exercise total dictatorial regime on its own people.

It is understandable that the USA counts on the current Ethiopian ruling party to fight extreme Islamist and other terrorists in the region. But the enormous military and financial aids blinded the Ethiopian government to take a wrong direction and terrorizing its own citizens inside the country. Well the so called terrorism fighter has turned out to be a terrorist itself.

The December 2003 massacre in Gambella region of West Ethiopia took more than 400 people lives. The Ethiopian government had never bothered to bring the perpetual to justice since it was the one who committed all those horrible actions and terror on the Ajuak tribe. Ethiopian’s information minister at that time (2003) Ato Berket Simon had even admitted the involvement of the Ethiopian solders in the terrorizing and massacring of the Ajuak people. “Now they are in custody and are going to be charged for the killing …” (Ato Berket Simon to BBC). It is clear that the US and other county’s aid were misused by the Ethiopian government in terrorizing its own citizens. This cruel action in Gambella region has grown so intense at the present day by forcefully displacing the people in Villagization program to sell the fertile land to foreign investors. Due to this forceful displacement tens of thousands was snatched their lands and left to extreme poverty. Those who dare to impose this program faced trial and imprisonment.

The Ogaden, in the eastern part of Ethiopia has been victim of the Ethiopian solders terrorism led by the dead prime minster Meles Zenawi. The government shifted its attention to Ogaden not to protect the indigenous people from any possible attack from outside terrorist but rather to grab as quickly as possible the valuable assets in the possible oil deposit in this region. The oil extraction program, run by Chinese oil field, has never taken the indigenous people into consideration. Therefore an Ogaden rebel group attacked this firm on April 2007 that gave an excuse for the murderer Meles Zenawi to launch his devastating and horrible massacre program. By Meles’s direct order the Ethiopian army swooped in Ogaden and executed, raped, tortured and imprisoned innocent civilians. Again the US military aid in combating terrorism was wrongly applied to terrorizing the Ogaden innocent people.

A student movement, protesting for academic rights on 2001 has led to the loss of more than 35 people by the direct fire of bullets by the Ethiopian government soldiers on the street of Addis Ababa. Those Special Forces were deployed to disperse and break up a peaceful demonstration. Women, young university and high school students were the victim of “terrorism on a broad day light” by Woyane’s (the ruling party in Ethiopia) vampire solders.

“It is time the EU and US realize that the current regime in Ethiopia is repressing the people because it lacks democratic legitimacy. ’’ (Anna Gomes EU election observer to Ethiopia on 2005) On peaceful protest on the outcome of a general election held on 2005,the special force massacred over 200 innocent people on a broad day light by snipers on the street of Addis Ababa and other cities. More than 80,000 youth were jailed and tortured. Almost all opposition leaders were thrown into jails. The million dollars aid from US government has helped the evil possessed Meles Zenawi and his savage troops successfully massacre Ethiopians.

The effect of the 2015 general election has already begun to be felt by the Ethiopian people. Activists, opposition party leaders, opposition party members, supporter, journalists, bloggers are still being hunted, jailed and sentenced. The 2009 anti terrorism law is a weapon used by the Ethiopian communist dictators to whip anyone who dares to criticize the government .Many fled the country and others are forced to be slave by minority Tigiriyan ethnics  (politically, economically and military dominant group.)

The recent crisis in Ferguson, Missouri, should not have really stayed this long, if the USA had invited one of its best allies, Ethiopian government.  Surely the Ethiopian Special Forces will implement their unlimited knowledge and experiences in dispersing peaceful demonstration by simply firing directly real bullets at the protesters. After all the USA aid made them experts at massacring innocent people on a broad daylight. Those carnivores Ethiopian soldiers accumulated the experience of wiping out civilians in Addis Ababa, Gambella, Ogaden, and Somalia. President Obama, maybe it is time to see the anger and frustration of people when police shot civilians on a day time. Imagine what Ethiopians are passing through when hundreds of civilians gunned down by police. Stop financing and aiding dictators and killers like TPLF.