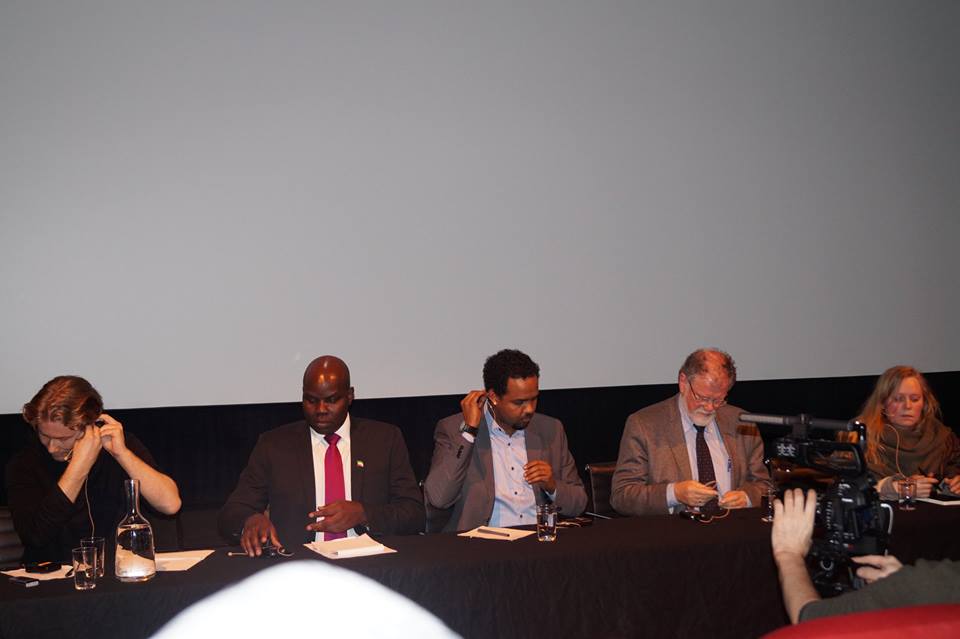 It was 6th Mar2014 on Thursday the program was prepared and co-ordinated by Frontline Club Oslo. The club has great contribution in preparing stage for different issues like debate, seminars and others which is critical and International conflicts among different countries. It is a great step for countries like Ethiopia to have this opportunities to explain the current and worst situations by Ethiopian Regime to the rest of the world.It was a great presentations and debate by guest speakers invited Mr. Obang Metho and Mr. Abdullah Hussen. Those great persons of the time to show the Current Ethiopian situations. The program was began by one of founder of Frontline club Mr.Truls Lie( Chairman).

The program started with speech prepared by Mr.Abdullah Hussen who has worked government Ogden region official from 2008 to 2012 went out of the country in 2012 Now lives in Sweden. He is

Advisor of president of Ogaden towards youth development

Member of Ethiopia youth executive committee one of youth founder.

On the vedio presented by Mr.Abdullah Hussen we clearly see the government officials and police officers including the commissioner are confessing their human right abuse by their own mouth. Arbitrarily arresting, torturing and killing number of prisoners. In relation to this, number of prison and prisoners human right report and Report of Utlendingsforvaltningens Land info about Ethiopia prison state that the exact number of prisons is unknown, but there are an estimated 120 federal and regional prisons. In addition to this, there are prisons and detention centers connected to police stations and on the woreda and kebele administrative levels. No independent or international organization has access to Ethiopia’s prisons. That makes it difficult to know how many people who are detained. In 2010 it was estimated that 86,000 were imprisoned, but the figure is very uncertain. Usually women and men have separate prison facilities. Landinfo’s sources describe prison conditions as generally bad, with prisoners facing serious abuse and intimidation. Being whipped with wires and electrical cords and threats of being injected with HIV-infected blood are some of the methods used.

In addition, in 2011 Swedish journalists were captured, imprisoned and faced charges of being territories.   Unfortunately, they were journalists at wrong place and time for the government. Because their government is concerned about them they are freed as a result of long diplomacy. However, there are many Ethiopian internationally recognized journalists who are jailed, tortured and called terrorist by their government till this day.

Finally, for the western countries, World Bank and many donor communities I would like to invited part of Human right Report titled “All they want is confession”

To the Donor Community

• Publicly and privately raise concerns with Ethiopian government officials at all  levels regarding torture, ill-treatment, and other human rights violations in  Maekelawi and other detention facilities in Ethiopia. Press especially the federal  affairs minister, the federal police commissioner, and the justice minister to adopt  policies to end the abuse and ensure those responsible are held to account.

• Actively seek unhindered access to Maekelawi and other detention facilities for international human rights and humanitarian organizations and for diplomats.

• Urge Ethiopian officials to invite relevant UN and AU human rights mechanisms, including the UN Special Rapporteur on torture and other cruel, inhuman or degrading treatment or punishment and the Working Group on Arbitrary Detention to visit Ethiopia.

• Monitor trials of defendants charged with offences under the Anti-Terrorism Proclamation and call on the authorities to protect all defendants’ right to a  Public hearing.

• Call for the amendment of the Charities and Societies Proclamation and the Anti- Terrorism Proclamation. Next guest is Mr. Obang with awesome speech  saying “Ethiopia-an abusive home for its people” in his speech denying about Ethiopian Economy which reported wrongly. Who rule the country is in illusions and most people are suffering a lot due to mistreatment by the Ethiopian regime .Finally he forward the message to Norway to stop donating the killer government.

Norwegian government had an agreement with Ethiopian Intelligence in 2012  which leads torturing and harassing their own innocent peoples and peoples of Ethiopians are dramatized by Ethiopian regime.Ethiopian regime prepared the law called Anti terrorism law which objectively helped to attack the people for example who write an article against the government is labeled as “ a terrorist”which is painful.The Government in Ethiopia is

not elected by Ethiopian people, there is only one seat opposition who has a right  to speak only 3 minutes do you think that this  is the right thing?? Do you believe that there is a democracy in this way??,in Ethiopia particularly one ethnic group only 5 % of the  population controlled the whole country by force. Mr. Obang forwarded his message to whom it may concern and gave an assignment to all to fight for freedom and stop human right violations.