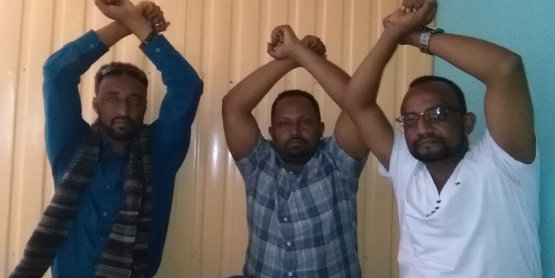 Ethiopian authorities should immediately release journalists Ananiya Sori and Elias Gebru or respect their right to due process. Since their arrest, on 18 November 2016, neither journalist, has been prosecuted or formally charged with any offense.

Elias Gebru and Ananiya Sori were arrested on 18 November 2016, together with their colleague and former leader of opposition party, UDJ (Unity for Democracy and Justice), Daneil Shibeshi by security forces. Outspoken journalist and former political activist Ananiya Sori was arrested following his recent criticism of government policies in reaction to widespread protests in the country during a radio debate organized by the pro-government media, Fana Broadcasting, in October 2016. In addition, Elias Gebru who is a freelance journalist and social media activist was apparently arrested in relation to his political analysis and published articles on social media.

Neither journalists have been informed of any formal charges against them and have been denied access to legal consultation or medical treatments. Both Elias Gebru and Anania Sori are also reportedly experiencing serious health problems due to the harsh detention conditions in several police stations across the capital, Addis Ababa. Elias Gebru is reportedly suffering from losing his olfaction senses. Together with Anania and Daneil, Elias was originally held in Bole Woreda police station for three months before being transferred to Qirqos Woreda Police station.  Anania Sori has also been transferred to the 6th Police station, currently called the Qirqos Sub-City Police Division.     .

Since the State of Emergency was declared in October 2016, thousands have been arbitrarily arrested in relation with widespread protests in the country, mainly throughout Oromia and Amhara regions. Even though different credible sources confirmed that more than 30,000 people have been detained under the State of Emergency, Ethiopian authorities have confirmed only the release of nearly 20,000 detainees after months spent in different military training centres located in different regions of the country. The authorities also claimed that the detainees were released after receiving rehabilitation training, despite the allegation that many of the detainees were reportedly tortured and subjected to inhuman, degrading and ill-treatments, and denied to healthcare, legal representation and due process.

The African Commission on Human and Peoples Rights (ACHPR) called for an international, independent, and impartial investigation into allegations of the security forces’ use of excessive and unnecessary lethal force to disperse and suppress peaceful protests in November 2016.

The state of emergency directive gives sweeping powers to the Command Post that has been appointed by the House of Representatives to enforce the decree, including suspending fundamental and non-derogable political and democratic rights granted under the constitution of the country, the African Charter on Human and People Rights and international standards of human rights.

AHRE strongly urges the UN Human Rights Council to address the deteriorating political environment of Ethiopia and the grave violation of fundamental rights. The UN HRC should takes a strong position and urging Ethiopian authority: