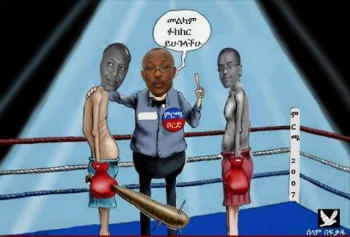 I am thinking you must have read my last report on Ethiopian helicopters that made an unauthorized trip to Eritrea. I felt I left the story hanging out there and it is not just fair to my readers not having a closure on the subject. Some might say why dwell on that when there are so many things to discuss regarding our country. I listened and went about looking for important subjects I could write about to enrich our life and become a better informed Diaspora.

I said Diaspora because due to this business of web filtering all our independent sites are blocked in Ethiopia thus the few that can read my submissions are overwhelmingly cadres or trusted officials of the regime that have passed certain test that proves they could withstand toxic ideas from the Diaspora. Anyway I combed the few TPLF sites and their children’s outlet here in the west looking for current events they are working on or being bothered about.

To start with the most time consuming and important issue being discussed is the coming election. The TPLF regime has been considering and the parliament discussing polices that would make the coming election run ‘smoothly and peacefully’ in the words of Dawit Kebede of Awramba Times. They have taken some measures to make that happen.

The ‘Election Board’ members appointed by TPLF did not have qualms swearing that they are independent and impartial. I know some might be uncomfortable with this since the TPLF pays their salary, owns their house including their kebele rations to fed their family, but that is being petty.

There has been many criticism hurled at the honorable Election Board for trying to enforce internal party rules and discipline on those that are trying to register to compete in the election. Some are questioning why such rules do not apply to TPLF and those controlled by TPLF but that is what is called nitpicking. Haters will always be haters is their answer.

The Election Board was so concerned about abuse of power by Andenet Party just last week they went ahead exercised their prerogative to form a clone. This is allowed by the constitution since the late great leader has used that method to clone CUD (Kinijit) thus enshrining the practice. With one brilliant stroke Andenet has been rendered illegal. The newly appointed Chairman of Andenet when informed about his authority was reported to have gulped down the Tej he was drinking and looked at the Awramba Times reporter suspiciously to see if he was being set up.

The Parliament has not been idle. What seems to bother them is the color blue. There has been discussion in the rules committee to see if the word blue can be deleted from the dictionary. Linguists such as professor Weldu Sbagadis have testified showing how the word blue can easily be banned and a new substitute found. In the meantime the parliament has instructed the Police not to allow wearing of blue t shirt, remove blue colored cars from the highway, confiscate all blue threads from stores and see if our scientists can paint the sky a new color.

I am sure you have heard of the lawsuit brought by cadre Redwan Hussein of the Communication Bureau against our activists in Washington DC. If you are not aware the incident happened last October while our cadre was in DC and was spotted in a shopping center walking around like an ordinary person but our alert Diaspora activists approached him and sort of introduced him to other shoppers in a loud manner. What was said was the truth about his activities serving the TPLF Woyane regime and his tendency to blame victims for the crimes of his masters. It looks like cadre Redwan did not look kindly at this and hired an attorney and sued. Of course he is not familiar with laws of a civilized country but his lawyers did not care as long as he was paying their exorbitant fees. The judge dropped the silly case and it is reported that our people not only paid for his attorneys but the translation fee for the video that was presented as exhibit. Of course cadre Redwan was in DC to follow his lawsuit unfortunately he was too scared to leave his hotel and was informed by phone regarding the dismissal.

Now you really do not expect me to bother you with such mundane matters while our helicopter is sitting in Asmara. From what I hear the Eritrean government has parked the war machine in a public square and is selling tickets for people to see, touch and marvel at this fearsome technology. I was also forced to write on this subject due to the very angry and threating email I received from Captain Asgedom Berhe of the Woyane National Security Agency. It looks like the good captain is not happy about my last article.

After threating me with all kinds of bodily and mental harm he would do to me if I ever showed up in his neighborhood captain Asgedom went on explain how uninformed I am and tried to set the record straight. I am grateful. After looking at his letterhead I am totally in awe of the many advanced certificate he has received in the art of torture and enhanced investigation methods. He is the recipient of a BA from Kim Il Sung University North Korea specializing in starvation as a tool and he did his graduate work in the former East Germany Leipzig University to be exact in use of LSD and other drugs to totally disorient human beings. When you consider he was hired as a consultant by the CIA for advice in Iraq you start to pay attention. The man has credentials.

It looks like he did not appreciate a lay man like myself writing about such an important and sensitive subject like the disappearance of a helicopter. He claims that TPLF was aware the three renegades that stole the machine were sleeper agents of Shabia and they were let go to uncover their friends that were in the Ethiopian air Force. It is his claim the helicopter they stole is of no value since it was an old model and not in use. Regarding the four additional officers that escaped to Kenya his claim is the security allowed them to go to make room for new recruits. What really go his goat was since my writing on the subject General Samora has gone apes and wants the helicopters back no matter what and he blames it on me thus the threat to teach me a lesson.

I decided to dig deeper and find out what effort the regime has made to recover our dangerous toy. I call it ours out of habit when it actually belongs to TPLF and the region of Tigrai. They normally use it to intimidate the rest of us into submission and transport high officials between Mekele and Adwa. It comes in handy during election time to hover over cities and show what becomes of a faulty voting. You would not believe the logistics involved in trying one helicopter back to Ethiopia.

The Eritrean government of course is deliberately dragging the issue and did not respond in a timely manner. Due to the absence of diplomatic relations between the two counties Sudan has been acting as an intermediary. To start it all the Eritrean government inflated the expenses beyond reason. The TPLF regime was understanding of parking and storage charges though a little high but the fine for crossing the border without notice and overtime pay for activating the defense units was outrageous to say the least. Even Al Bashir was shocked with the bill. After further negotiation and good will gesture from Asmara some reduction was made.

The next hurdle for the Woyane regime was finding trustworthy and competent pilots. It was a little embarrassing for the regime to admit but there were none. It is not that they could not find any but the key word was trust. The trainers are from the old regime and TPLF cannot face further humiliation. After further review a retired one was located and the individual having an ailing mother, a wife and two kids that could be used as a leverage was felt to be an acceptable risk.

The last two things left to resolve the issue was the form of payment and the fuel for the machine. Both the Bir and the Nakfa we out of the question. The Eritrean government insisted on cash or an open credit card. It was agreed to use former first lady Azeb Mesfin’s American Express Platinum card which does not have any limit. Three rooms in Inter-Continental Hotel in Asmara was reserved at the rate of US $500 a day per room.

A small boat with three barrels of jet fuel left the port of Aden headed for Massawa. A flatbed truck was hired to transport the fuel to Asmara. Again due to paper work insisted by the Eritrean regime it took a whole week for the one hundred kilometers trip. Of course the pilots were enjoying themselves in Asmara with their expense paid vacation. It was reported by Daniel Berhane a TPLF blogger that they run the bill so high first lady Azeb was admitted to one of the private hospitals for mental breakdown. She blamed it all on Samora for obsessing about the helicopters.

I know I am jumping the gun here writing about a subject that still has not been resolved. What can I say I got tired of waiting. The last I heard those tricky Eritreans have pulled some plugs and a repair crew is being dispatched. First lady Azeb has not been told about the new development.