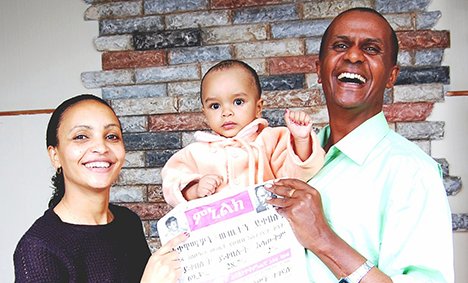 The Ealing Amnesty Group has recently declared that it has adopted Eskinder Nega as a focus for campaigning in 2017. This must be highly appreciated by the freedom and peace-loving citizens of the world. We hope other Groups also adopt other journalists, such as Journalist Temesgen Desalegn, whose health is currently seriously damaged in captivity in Zeway Prison.

On 27 Friday 2017, Ealing Amnesty Group held a successful vigil in front of 17th Princess Gate, London, from where the diplomatic mission of the jailers of Eskinder Nega currently operate in Britain.

A good number of banners bearing the logo of Amnesty International and a pictures of Eskinder Nega were printed and brought by the group and distributed to each protester to hold up.

Unlike the “Ethiopians-only” protesters who are normally managed by the presence of heavy Police Force, required to demonstrate across the Knightsbridge road in front of the Embassy, this vigil started at about 2:00 p.m inside the compound, which of course sent the Embassy staff to their uncomfortable state of mind. It is actually a good idea for the Police to allow holding vigils in the compound, as in the past, at times demonstrators spilled over to the main road and blocked the road causing serious traffic jams. The nervous Embassy staff called the police, who arrived at once, only to see few peaceful protesters quietly standing up with banners up, doing nothing violent or anything to worry about. The Police just looked at the peaceful demonstrators and left without any word.

Slowly a good number of Ethiopians started joining the vigil with flags and bigger Eskinder Nega’s picture, which read: “Journalism is not terrorism”. The organisers appreciated that picture, and started intermingling, conversing and sharing information about Eskinder and other prisoners of conscience. As the number started a bit swelling, again the nervous embassy staff called the Police. Two Policemen on motorcycles arrived to check out, only to find that the protesters were peacefully standing there holding up the banners that demanded the freedom of Eskinder Nega. They too disappeared without the roaring sound of their motorcycle on their way out.

The protesters came as far as from Glasgow, Scotland, and other cities to take part on the vigil.

Towards the end, one of the human rights advocates, Mr Zelealem Tessama took megaphone and addressed Amnesty International and the protesters how significant that vigil was for Serkalem Fasil, Eskinder’s wife and Nafkot son.

Serkalem Fasil is a journalist too, former co-publisher of the newspapers Wenchif, Asqual, Menilik, and Satenaw with her husband, Eskinder Nega. In November 2005, she was arrested along with thirteen other reporters, including her husband, Eskinder Nega, after publishing articles critical of the Ethiopian government’s actions during the May 2005 parliamentary elections, where the regime was completely defeated, getting zero vote in Addis Ababa the capital, but refused to leave power, using its military muscle. They were all charged with “treason, outrages against the Constitution and incitement to armed conspiracy”. Nafkot, Serkalem and Eskinder’s

son was born in captivity. Baby Nafkot, mother Serkalem and father Eskinder were released on 10 April 2007, under “presidential pardon”.

Eskinder was rearrested in June 2012, for the 7th time, and was sentenced to 18 years in prison for terrorism offences, after he criticised the Ethiopian brutal regime that stayed in power after losing election and called for freedom of expression in speeches in articles. Any criticism of the Ethiopian regime, dominated by the former terrorists (1), the Tigray People’s Liberation Front (TPLF), is defined as “terrorism” by the human rights abusers of Ethiopia that terrorises its own citizens. Millions have now being vanished into exile, to be refugees across the globe, including here in Britain. Serkalem and her son, Nafkot too are the recent addition to the wave Ethiopian refugees, now in exile, starting life in the USA. Journalist Eskinder still remains in captivity in a rat-, cockroach-, and flea-infested cell.

Eskinder is a recipient of the PEN/Barbara Goldsmith Freedom to Write Award, Golden Pen Award of Freedom and Amnesty International designated him a prisoner of conscience.

The vigil was concluded by one of the organisers, Ms Phillips, who thanks the vigil attendants and encouraged on networking in the future, working together and taking part on both Ethiopian and Amnesty International activities to secure the freedom of Eskinder Nega and other prisoners of conscience.

The vigil was peacefully dispersed at 4:00 p.m. with a vote of thanks to the Ealing Amnesty Group.