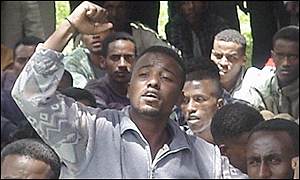 We all should condemn the unbridled use of force by TPLF in Ambo and everywhere in Ethiopia. The way it dealt with these innocent university students should be condemned by all peace loving Ethiopians everywhere. We all know TPLF knows only force. TPLF is brut. It only knows and understands force. We condemn its constant use of force. True to its core essence, if TPLF senses a problem and sees a reporter, TPLF will kill the reporter, those affected with the problem and for TPLF, the problem is solved. TPLF is still in the mindset it was in Dedebit. Whatever the circumstances, those who are killed are Ethiopians. We are all concerned and I would like to know why these students are killed? Currently what TPLF is doing is nothing but taking a calculated action for the coming election. I want to understand what crimes these university students made. Are “these crimes” deemed crimes by the TPLF constitution? I want to know what the students stood for. TPLF is always criminalizing those who stand for the long time interests of Ethiopia. Did they stand for the long term interests of Ethiopia? I ask these questions so that I can throw my lot with them. On the other hand, if they were demonstrating against the long term interests of Ethiopia, then we have no reason to side with them and we should hold back our support. In line with this we must investigate the leading force behind these demonstrations. Who is pushing them for this? I heard their chants and understood their demands. Some of their demands are not for unity and out right TPLF coined.

Many think it is better to keep your shut and your hands to yourself when this kind of issues surface. Well, when one puts oneself in political struggle, one has no choice but to fall into one of two categories; the gutless ones and those with guts. A situation like the one at hand is; damn if you support! damn if you don’t! If you do not stick out your neck in hot issues when no one wants to do so, you are gutless. Those who stand on the side of the people should come out and make their statements on hot Ethiopian issues. I know this issue has lots of supporters on both sides of the fence. It is time to stand where you need to be counted. That is what the people want them to do. These are leaders and followers with guts.

For sure all those who oppose TPLF are not Pro-Ethiopia. This is true for internal and external forces. Externally EPLF is an example. So is Al Shabaab. Internally those who allied with TPLF and those who have the same political philosophy and administrative policy as TPLF are in that same camp. To distinguish where these university students fall, we have an obligation to investigate what exactly they were demonstrating for.

For some it is advantageous to support the students’ struggle, no matter what it is, hoping and wishing it will develop into a country wide movement and help topple TPLF’s government. They have rights to hope and wish, but hope and wish do not oil the wheels of history. It is the objective condition on the land and the subjective reaction to this reality that does so. TPLF is a brute force, an invading army, a minority ruling the majority. In order to stay in power, it has to make it impossible for the rest of the population to unite. Here comes ethnic politics. TPLF prepared the political space only for ethnic politics and ethnic organizations, ANDM, OPDO, SEPDF and the other tentacles. TPLF wanted to use ethnic politics to rule Ethiopia by weakening the united Ethiopian force. TPLF wanted to control these ethnic organizations of its creation and ethnic politics in its strong arm. TPLF thought it will always be in control. Well, the dynamics of ethnic politics spin out of the palms of TPLF and asserted a life of its own. What we see here is the result of TPLF policy in spite of TPLF. Be that as it may, we have to have our own glasses to look at this phenomenon. We cannot borrow TPLF’s or someone else’s glasses and put it on our eyes. If there is a force that is driving to go destroying Ethiopia further than TPLF, then that force is no better than TPLF. Let us understand the complexity of ethnic politics. It is a double sided sword. One side is used by the power hungry elite of each ethnic group, the Issayas Afework type. The other side is a genuinely concerned section of the ethnic group that strives for democratic rights, equality and the rule of law. This section understands a democratic central Ethiopian government, which promotes equality, institutionalizes democratic rights, establishes democratic institutions, and makes rule of law a priority is the only solution to all Ethiopians.

There are few major ethnic groups and very many minor ethnic groups in Ethiopia. Each and every one of these ethnic groups has the same problem the others have, primarily TPLF and then the result of TPLF’s actions. Now, the only way TPLF will be demolished is of the rest of Ethiopians come united as one. Then not only will TPLF destroyed, but also the future will be guaranteed to be democratic.

Yes TPLF is going against its own constitution when it ignores the demands of these students. According to the TPLF ethno nationalist constitution, the land belongs to the ethnic governments and not to the central government. These students are demanding to get what TPLF wants them to get. Then why did TPLF killed these students? TPLF knows no laws whether promulgated by it or anyone else. TPLF knows only what it wants to be the rule of the land. Rules for TPLF mean to make the people its slaves today. Tomorrow there will be other laws.

Finally, let us stand up together to defend each and every Ethiopian everywhere. Let us do it today. TPLF can only continue to live by killing and persecute everyone it does not like.